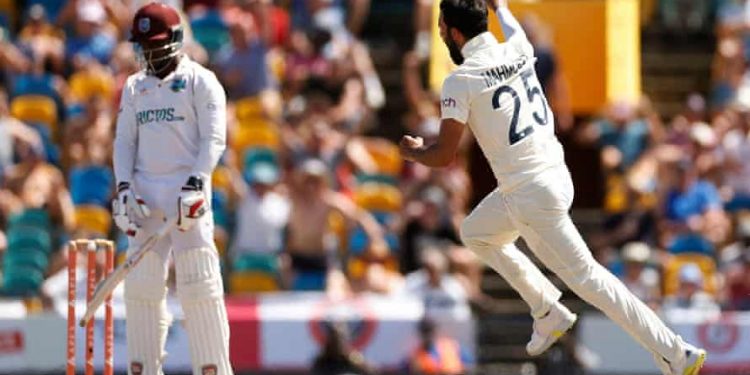 
For the second successive Test match it was England making all the running on the final day, throwing everything they could muster at West Indies only to end up shaking hands on another draw due to Kraigg Brathwaite’s remarkable powers of concentration.

West Indies had been set 282 for victory from a minimum of 65 overs after England had thrashed 185 for six by lunch and declared for the second time in the match. This equation was not too dissimilar to that in Antigua last week when it was 286 from 71; so, too, the early switch to survival mode by West Indies after the loss of three quick wickets.

But come 5.47pm local time, 13 minutes from the close, the tourists had to accept the 0-0 scoreline going into Thursday’s final Test in Grenada. Brathwaite had simply been the hardiest of perennials in this match, following an epic 11-hour first innings score of 160 – one that pushed back against England’s 507 for nine – with a further 246 minutes at the crease and an unbeaten 56.

Jack Leach claimed three wickets and offered more flight and guile at the end of a match in which he sent down 94.5 overs, while Saqib Mahmood also crackled with a two-wicket burst. But Brathwaite could not be dislodged, facing more balls in a Test match (673) than any West Indies batter in history. During a tense final hour, as Leach and Dan Lawrence twirled away in the gloaming, he also found a similarly resolute sidekick in Joshua Da Silva.

It was Leach who had struck initially for England when, tossed a hard new ball by Joe Root just five overs into the fourth innings, he immediately removed the opener John Campbell via a bat-pad catch that needed the latest use of the review system in a series of poor umpiring. Mahmood then knocking over Shamarh Brooks and Nkrumah Bonner in quick succession saw hopes rise that this heartbreaking surface might yet produce a positive result.

Gliding in from the Joel Garner End before winding up into his smooth but slingy action, Mahmood struck sixth ball when Brooks edged the first catch to the cordon of the match. Root was credited – his 150th catch in Test cricket – but it was Zak Crawley at second slip who made it possible, twice palming the ball up on the dive before his captain ran round. “I felt like a striker on the line, poking it in,” Root joked. “It should go down under Zak’s name to be fair.”

Root’s 151st was far simpler, at least, Mahmood squaring up Bonner and taking the edge for what was his fourth wicket on debut. But from 39 for three in just the 13th over, West Indies managed to get through to tea, first-innings centurion Jermaine Blackwood having joined his captain for an hour and a half of steadfast resistance.

Seven wickets required by England in the final session made for another repeat scenario from the first Test but Leach swiftly changed the narrative when, after a change of ends, he floated one up to Blackwood, found a smidgeon of turn and Jonny Bairstow – one of two close fielders kneeling down among the cage of catchers – snaffled it.

After Jason Holder then fell to Leach for a 24-ball duck via an excellent diving catch from Lawrence, West Indies were wobbling. The tension was high, the crowd was being rewarded for the patience shown all week and no one could argue that England’s desire to take the contest deep this time was disrespectful. Brathwaite was simply as stubborn as a grass stain.

The launchpad for England’s victory push had come in the morning when, in between showers and the now familiar sight of the local sound engineer racing on to rescue his stump microphones, they crashed 145 runs in just shy of 25 overs. Their batters cared little for red ink, losing six wickets along the way as the West Indies outfielders held a succession of superb catches in the deep.

Lawrence top scored with 41 from 39 balls, the No 4 repeating his role on the final day in Antigua and completing a strong overall performance after his 91 on the opening day. He and Bairstow cleared the ropes a couple of times apiece to the delight of the crowd, while all eight batters were wing-heeled between the wickets with the field spread.

This was the first freewheeling session witnessed since Ben Stokes lit up the second day with his 128-ball 120, making way for a commendable assault on the West Indies lineup despite two of England’s frontline bowlers – Chris Woakes and Matthew Fisher – being largely redundant due to conditions.

On the rebuild in the Caribbean, England are putting much stock in qualities such as energy and selflessness. Hopes of a first victory of this chastening winter may have been thwarted by Brathwaite’s hometown heroics but on these fronts they are at least meeting the brief.

If England are to return...