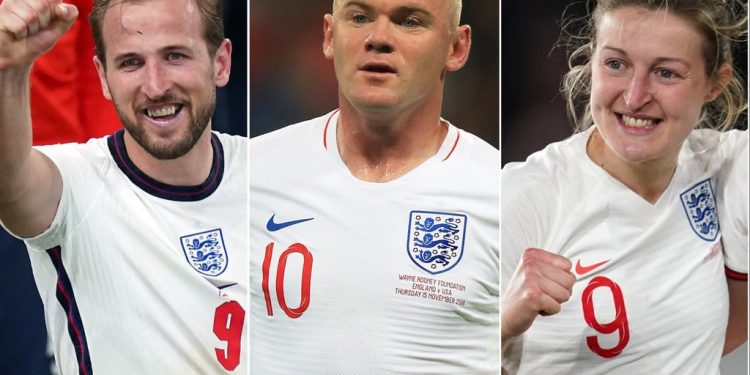 Wayne Rooney’s England goalscoring record is under threat on two fronts ahead of a busy summer schedule.

While most of the attention has been given to Harry Kane moving within four of Rooney’s tally of 53, Ellen White brought up a half-century for the women’s side against North Macedonia last week and will have the first crack at top spot.

Here we look at the race for the record.

Kane and White are riding impressive scoring runs, with Kane scoring 15 goals in his last 12 internationals while White has 21 in 22 games going into Tuesday’s World Cup qualifier against Northern Ireland.

That run has seen the latter reach her England half-century in two games fewer than Rooney, 105, while Kane has 49 in just 69 appearances.

Rooney and White had each scored only 26 after that number of caps and have similar records since.

Rooney’s run of six goals in five games in 2012 and 2013, up to his 81st cap, sees him leading the head-to-head comparison with White 35-29 at that stage but White narrowed the gap with a similar sequence in the 2019 World Cup to kick off her ongoing hot streak.

Kane’s three goals against Albania and four against San Marino in back-to-back games in November brought the overall record into his sights sooner than would have been expected.

A goal against Switzerland then saw him join Sir Bobby Charlton in second in the men’s scoring chart, and in far fewer games, and whoever gets to the record first Kane’s scoring rate will be far superior to all his rivals.

White scored a hat-trick against Northern Ireland last February and another treble this time around would lift her to a share of the record.

Should that not happen, Kane will have the next chance with Gareth Southgate’s side playing four games in the Nations League before the women next take to the field.

Two of those are against Hungary, frequent opponents for England who held Kane to one goal across two World Cup qualifiers in late 2021, while Germany and Italy are also sure to provide a tough test as Kane seeks four goals in the four games to match the record.

Attention would then shift back to White, with the Lionesses facing Belgium and Holland later in June and then Austria, Norway and Northern Ireland in July.

Even if those five games do not prove enough for White, Sarina Wiegman’s side then tackle Austria and Luxembourg in September before the men’s return games with Italy and Germany.

After moving to 50 goals and being listed ahead of Kane and Charlton, behind only Rooney, White told ITV Sport: “It’s an incredible feeling to be among those amazing players, it’s really lovely.”

Kane said last month: “I would love to break that record. Hopefully, with the games we have this year, that will be possible. I am in a really good place at the moment.”

For the latter, the spectre remains of breaking the record in an empty stadium as the games in Hungary and at home to Italy will be played behind closed doors because of the respective hosts’ crowd trouble in recent fixtures.

Southgate said: “That would be hugely unfortunate. For both countries it is a punishment because our fans and (Hungary’s) fans weren’t able to control themselves.

“That’s an embarrassment for us, but it is the situation we have got. It would be particularly sad if that was the game where Harry broke the record.”

Catchee, the earworm game that might just save its designers from bankruptcy

Catchee, the earworm game that might just save its designers from bankruptcy