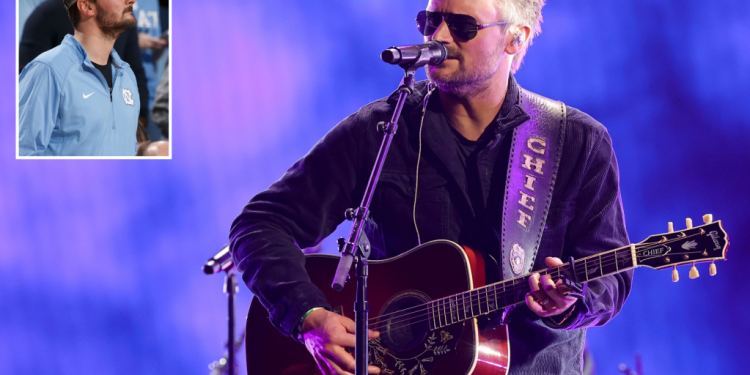 
Country music star Eric Church is trading in his shades for Carolina blue this weekend.

Church announced the last-minute cancellation of his upcoming concert in Texas so he could watch the No. 8 North Carolina Tar Heels at the NCAA Tournament on April 2.

The Tar Heels are set to face rival No. 2 Duke in the Final Four.

In a message on Ticketmasterthe 44-year-old musician explained to his fan club, the “Church Choir,” he’ll be in attendance in New Orleans to cheer on the Tar Heels alongside his family.

“As a lifelong Carolina basketball fan, I’ve watched Carolina and Duke battle over the years,” Church said. “But to have them matchup in the Final Four for the first time in the history of the NCAA Tournament is any sports enthusiast’s dream,” Church said.

Church was expected to perform at the AT&T Center as part of his “The Gather Again Tour” on the evening of the Tar Heels’ big game — the tour’s only stop in San Antonio. The concert has since been listed as “canceled” on the venue’s website.

“This is also the most selfish thing I’ve ever asked the Choir to do: to give up your Saturday night plans with us so that I can have this moment with my family and sports community,” Church said, defending the cancellation.

“However, it’s that same type of passion felt by the people who fill the seats at our concerts that makes us want to be part of a crowd at a game of this significance.”

Church, a North Carolina native, is routinely found courtside or on the sidelines during Tar Heels basketball and football games. He traveled to Philadelphia last weekend as the Tar Heels booked their ticket to New Orleans.

He thanked fans for allowing him to go to the game before quoting the late Tar Heels basketball broadcaster Woody Durham, “Go where you go and do what you do.”

The AT&T Center offered refunds to ticketholders. However, Church’s fans expressed their disappointment over the cancellation days before the show.

“Eric Church cancels his San Antonio gig for a basketball game and we’re supposed to be cool with it?” One fan wrote on Twitter. “Get a DVR and go @DukeMBB.”

I’ve made numerous out of town trips to go see him. Mixed feelings. I appreciate his passion for his team but Not gonna lie im pretty mad. Dude didn’t even reschedule. Just canceled it,” another disappointed fan said.

Church has not addressed the canceled performance on social media.

The Tar Heels, with Church in attendance, will tip off against Duke at 8:49 EST at the Caesars Superdome.

Rep. Zoe Lofgren on January 6 and the House committee's investigation

Rep. Zoe Lofgren on January 6 and the House committee's investigation