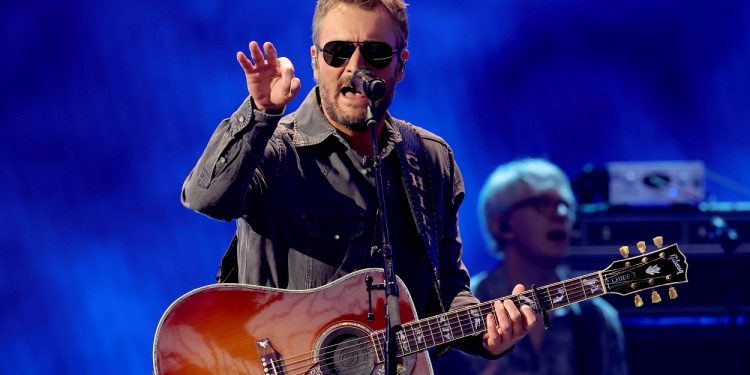 
Country music sensation Eric Church is known for putting on a live concert experience that draws in thousands of engaged fans for hours at a time. Still, even he can’t resist the pageantry and historic nature of the upcoming Final Four matchup between his North Carolina Tar Heels and the Duke Blue Devils.

Church grew up in North Carolina and is an avid Tar Heels fan, so he showed little remorse in canceling his concert to have a chance to see if his team can beat Mike Krzyzewski and Duke en route to another National Championship.

Church has played thousands of shows and he’ll play thousands more. He’s become known for his blend of old-school rock-and-roll, bluegrass funk, and smash-hit country song writing style that has captured him millions of fans.

It’s his fans in San Antonio that will be feeling funky, though, because the rockstar has decided that instead of being in front of the crowd, he wants to be a part of the crowd that will watch what should be a legendary matchup between two of college sports’ most bitter rivals.

He canceled his concert scheduled the same night as the game, offering full refunds to undoubtedly disappointed country music fans.

“As a lifelong Carolina basketball fan, I’ve watched Carolina and Duke battle over the years,” Church said (h/t New York Post). “But to have them matchup in the Final Four for the first time in the history of the NCAA Tournament is any sports enthusiast’s dream.”

“This is also the most selfish thing I’ve ever asked the Choir [his fans] to do: to give up your Saturday night plans with us so that I can have this moment with my family and sports community.”

Church is right: North Carolina vs. Duke will be historic

One would think that Eric Church’s wheelhouse is talking slide guitar and power chords, but as a sports enthusiast, he’s entirely correct in saying that this matchup between North Carolina and Duke is historic.

For as familiar as the Tar Heels and Blue Devils are with each other on the basketball court, one would think that they’ve had their fare share of matchups in March Madness.

That’s not the case, though.

In fact, the two programs first squared off on the hardwood over 100 years ago, when UNC beat Duke, 38-25, on January 24, 1920. The heated rivals have played 255 additional times since that first matchup, but they’ve never met in the NCAA Tournament.

It’s not as if the programs are strangers to March Madness either. It’s quite the opposite. They’re both mainstays and usually heavy favorites.

Duke has made the NCAA Tournament 44 times. The Blue Devils have made 16 Final Four appearances and have five National Championships to boast of. Krzyzewski has been head coach for all five of Duke’s titles.

Though Hubert Davis is in his first season as head coach at North Carolina, he’s a former player and has plenty of history on his side.

UNC has made the tournament 41 times and has gone to the Final Four 20 times. The Tar Heels have six National Championships in their trophy case, three of which were won under the legendary and watchful eye of Roy Williams, who retired after last season.

Duke has been heating up as of late and the Blue Devils are playing their best basketball at the most important time of the season. They’ve beat No. 15 CSU Fullerton, No. 7 Michigan State, No. 3 Texas Tech, and No. 4 Arkansas and look like a team ready to win a National Championship.

Potential No. 1 overall NBA Draft pick Paolo Banchero is leading the way with 18.5 points and seven rebounds a game, but he’s complemented by a squad of talented teammates who won’t cave under the pressure of this moment.

He’ll also have Krzyzewski pulling the strings, which could be a massive advantage for Duke.

Not to be outdone, North Carolina has run through a gauntlet of No. 9 Marquette, No. 1 Baylor, No. 4 UCLA, and March Madness Cinderella, No. 16 Saint Peter’s, to get to this point.

Considering the schools, the talent on the floor, and the enormity of the moment, this Final Four matchup could be one of the greatest of all-time. It certainly has the makings of a legendary game on paper.

“It’s that same type of passion felt by the people who fill the seats at our concerts that makes us want to be part of a crowd at a game of this significance,” Eric Church said in his statement.

Who could blame him, or anyone for that matter, for wanting to be at this one?

Is it cheaper to have a bath or a shower? Your energy questions answered | Energy bills

Is it cheaper to have a bath or a shower? Your energy questions answered | Energy bills