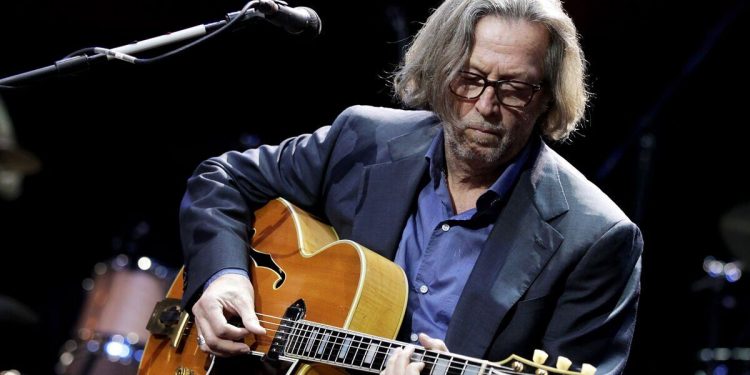 
Eric Clapton is currently on tour across Europe for the first time since the coronavirus pandemic kicked in back in 2020. However, the legendary singer and guitarist has found himself at the mercy of COVID-19 for the first time.

Clapton has cancelled his upcoming gigs in Zurich and Milan, which were due to take place on May 17 and 18. An official announcement was released on his Facebook page which revealed he is “suffering” from Covid, having recently tested positive following his Royal Albert Hall gig.

“He has been told by his medical advisors that if he were to resume travelling and performing too soon,” the statement continued, “it could substantially delay his full recovery.”

They added that the Layla singer did not want to further pass on the virus to anyone else. It read: “Eric is also anxious to avoid passing on any infection to any of his band, crew, promoters, their staff and of course the fans.”

Clapton’s statement added: “It is very frustrating that having avoided Covid throughout lockdown and throughout the period when travel restrictions have been in place Eric should have succumbed to Covid at this point in time, but we very much hope he will be sufficiently recovered by the end of the week to be able to perform the remainder of the planned performances.”

Clapton has, in recent months, been staunchly against the COVID-19 vaccine. He even went so far as to call the vaccines “mass formation hypnosis”.

READ MORE: ‘Filthy old guitar’ found in cupboard is worth more than a house

Clapton said earlier this year: “I didn’t get the memo. Whatever the memo was, it hadn’t reached me. Then I started to realise there was really a memo, and a guy, Mattias Desmet [professor of clinical psychology at Ghent University in Belgium]talked about it. And it’s great. The theory of mass formation hypnosis. And I could see it then. Once I kind of started to look for it, I saw it everywhere.”

Clapton, who wrote music with the likes of The Beatles star George Harrison, added that he had “seen little things” on YouTube which were like “subliminal advertising”.

“Bit by bit,” he told The Real Music Observer, “I put a rough kind of jigsaw puzzle together. And that made me more resolute.”

Clapton did receive his COVID-19 vaccine last year, however he revealed he had some adverse reactions to it.

Clapton claimed he had “severe” reactions to his first dose of the AstraZeneca vaccine which “lasted ten days”.

He continued: “I recovered eventually and was told it would be twelve weeks before the second one … About six weeks later I was offered and took the second AZ shot, but with a little more knowledge of the dangers. Needless to say the reactions were disastrous, my hands and feet were either frozen, numb or burning, and pretty much useless for two weeks, I feared I would never play again.”

He noted that the “propaganda said the vaccine was safe”.

How many times can you get COVID? What experts know about reinfection - New York Post