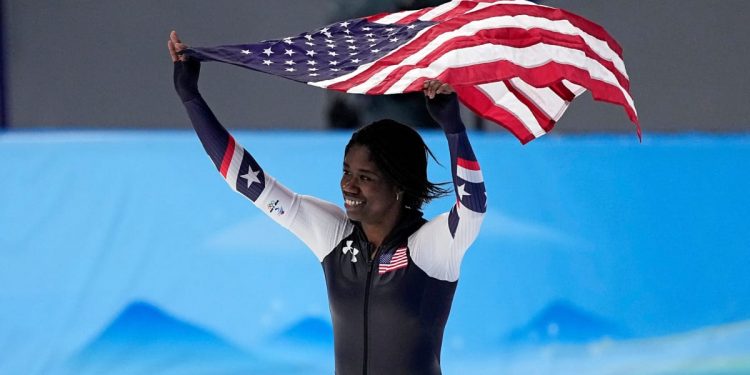 Erin Jackson made history as the first Black woman to win an Olympic medal in speedskating—and it’s gold.

On Sunday in Beijing, Jackson blazed past the competition with a time of 37.04 seconds in the 500 meters to become the first American woman to medal in an individual race since the 2002 Olympics in Salt Lake City.

Jackson’s rise is almost hard to believe considering that she was a national championship-winning inline skater five years ago. She switched to speedskating and made the U.S team for the 2018 PyeongChang Games with just a few months of experience under her belt.

She finished 24th in the 500 in 2018, but returned to the Winter Games with four years of experience that made Jackson a heavy favorite. However, the Ocala, Fla., native nearly missed out on Beijing after slipping in the Olympic trials in January.

The mistake left her out of the U.S. qualifying spots for Beijing, but teammate Brittany Bowe, who was a flagbearer in the opening ceremony, gave up her spot in the 500 for Jackson.

She and fellow American Shani Davis are the only Black athletes to win long-track speedskating medals at the Winter Olympics.