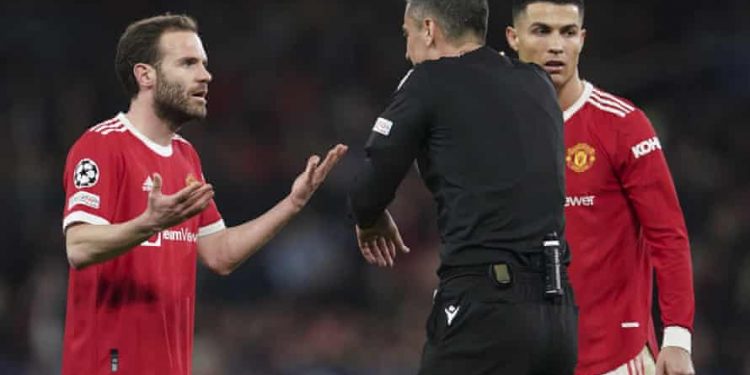 
Deep into the 94th minute at Old Trafford, Manchester United swarmed forward for one last attack. As the famous red shirts massed ominously in the penalty area, the Stretford End rose as one, shouted as one, dreamed in vivid noise and colour of a classic United comeback. Meanwhile, surging forward with the ball at his feet, the messenger at the gates of glory, was Nemanja Matic.

Well, Matic carried on running. Slowed. Slowed a little more. Took a look up. Panicked. Remembered that he still had a football at his feet. Spotted Marcus Rashford on the right wing: the simplest and least threatening ball, but the only one that would not require him to stop, turn, swivel or twist. The moment passed, and a good deal more quickly than Matic.

In a weird way, it would have been fitting if Matic had belted the equaliser in from 30 yards. Such had been the nihilistic incoherence of United’s second-half strategy that it was about as likely a scenario as anything else. They had 11 shots in the whole game, of which Diogo Dalot had four and Raphaël Varane two. Six shots for the United defence. None for Cristiano Ronaldo. You probably needed to be a tactical genius on the Ralf Rangnick plane to work out the thinking behind that.

But you can’t really pin this one on Rangnick. This is simply United’s level now. They didn’t play within themselves, they didn’t disgrace themselves. They simply played like what they are: a wildly uneven team with great individual quality but without the composure to control games, the defensive quality to close them out, or the tactical quality to find their own solutions on the pitch. Up front they remain curiously dependent on a striker who has scored in two of his past 12 fixtures – the same as the Leeds forward Joe Gelhardt – and who for all his occasional heroics is enduring his most inconsistent season in 20 years of professional football.

Even so there was a particularly chaotic feel to United in the final half-hour, a period that generated five substitutions and no end of confusion. Last to arrive was Juan Mata, a player widely assumed to have retired in 2018, slotting in at the base of midfield, with a five-man attack ahead of him. From the stands, we stared blankly at Rangnick. Was this the plan? Had they trained in this formation? Or was Rangnick, like everyone else in a red shirt, simply making it up as he went along?

The great shame was that United had started with such promise. It was an atmosphere as good as any Old Trafford has provided all season. There was slick forward movement and a chance for Anthony Elanga. Fred, recently possessed by the spirit of Duncan Edwards, was everywhere: tackling, creating, arguing, doing mad skills: a player finally scaling the limits of his potential.

These are the times when United still make some sense: youth and experience, academy products and marquee signings, good football in front of a passionate crowd. United have always been capable of such moments. The problem is that they can rarely sustain them for a game, let alone a season. Push at the walls, squeeze their weak points, and they have no idea how to react. Atlético stole the lead late in the first half and from that point United simply crumbled.

All of a sudden, Bruno Fernandes was going where he wanted. Ronaldo was going where he wanted. Elanga didn’t have a clue. Harry Maguire was doing swivel-turns in his own penalty area like a supermarket trolley with a wonky wheel. Scott McTominay dropped deeper and Fred pushed higher, leaving a huge hole in midfield. Ten minutes of mild adversity was all it took for the concept of United the team to evaporate. On the touchline, Rangnick made a triple substitution just to try to feel something again.

A word for Atlético who were shamelessly magnificent, channelling some ouija-board vision of their former selves, scrapping and shithousing like the team they once were, rather than the 12th best defence in La Liga. United will howl and moan at the gamesmanship, the grizzled tactics, the Slovenian referee. But really United were lucky to be here. In eight European games they have needed late goals in five. They were originally picked to face Paris Saint-Germain in this round, only for the draw to be voided. Here, perhaps, their luck finally ran out.

And here again we come to the crux. Strip away the hubris and the history, the money spent and the words expended, and is this United side really any better than – say – Ajax or Napoli or Marseille? Perhaps we need to stop thinking of United as profligate underachievers. This is where they are: a second-rank side, an also-ran, a makeweight. Well tried, lads. Better luck next year.