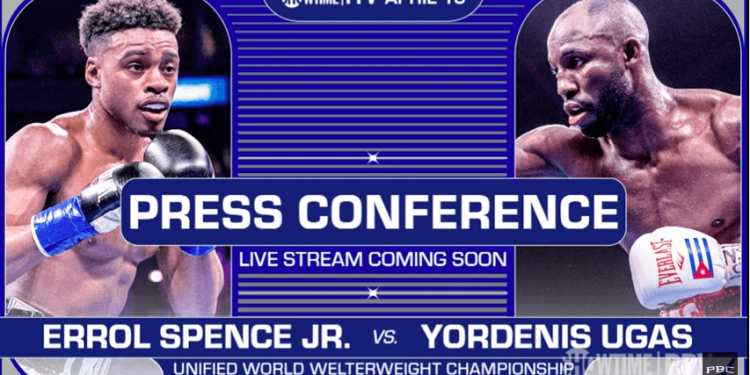 
Errol Spence Jr puts his WBC and IBF welterweight titles on the line Saturday, April 16, against Cuban-born craftsman Yordenis Ugas, who now holds the IBF welter strap. The combatants sized each other up during a Wednesday press conference at AT&T Stadium in Arlington, Texas, presided over by emcee Brian Custer.

Showtime will helm the PPV production, promoted by PBC and Tom Brown.

Errol Spence came off as per usual, relaxed. He showed flashes of humor, and self deprecating humility, when asked if we could expect a KO. But he also flashed his serious, contemplative side, as he told and reminded fans that he’s been through a couple circles of Hell to be here. Car crashes, torn retinas, he can handle the impediments, he said, because he’s built different. “I gotta thank my mom and my dad for blessing me and installing that grit, that hard work, making no excuses, just keep grinding.”

Spence (27-0, with 21 KOs; last fought 12-5-20, beating Danny Garcia at AT&T) told the assembled that he felt blessed to even be here today, and that he felt happy to be back with the Showtime crew. “It’s my time,” he said, after giving Ugas props for being a stalwart. “I’m gonna give a great show,” Errol Spence said, asking all to purchase the PPV. “At the end of the day I wanna be undisputed welterweight champion of the world so this is another step forward for myself.”

The Texas fighter said he has had no issues with his left eye. Fans recall perhaps that Spence had to pull out of a scheduled fight with Manny Pacquaio ten days before the August 21, 2021 clash because of a torn retina. He said that the eye is good, and that he’s been training hard for six months, so people can expect 100% Spence.

Errol Spence drew chuckles when asked if he’d get a stoppage versus Ugas. “Your moniker is ‘Man Down,”’ Custer noted. “We’ll see,” Spence said, “I don’t think I’ve stopped anyone in awhile,” he stated, laughing.

“I’ve been feeling strong, I got a nutritionist. I feel like that was a missing ingredient. I’ve been struggling to make weight for a minute now, and I feel like that’s the main reason not stopping anybody. Killing myself with a sauna bag on, running twice a day, things like that. It’s the first camp in awhile I didn’t put that on, I’ve been sparring with no shirt on, training with no shirt on, it’s a breath of fresh air..I’m actually having fun in this training camp, I haven’t had fun in training camp in a long time.”

Ugas in Spanish addressed the media present. He allowed that this is the biggest fight of his life, and made sure to mention a call for freedom for political prisoners in Cuba, and also gave a shoutout and then asked for a minute of silence for those affected by war in Ukraine. The 27-4 (12 KOs) tradesman said, “I was ready for Pacquiao, I’m going to be ready for Errol Spence.”

Spence said that all due respect, he feels that he’s right now better than Pacman was last August. He wanted the opportunity to wrest the torch from Manny, but c’est la vie. And a win here, a media member asked, does that make the winner THE shot caller at 147? I’ve been and am the shot caller, Errol Spence responded. When asked if we’d see a Spence vs Terence Crawford fight if and when he downed Ugas, he offered a tepid, “We’ll see.”

Dallas Cowboys boss Jerry Jones took to the mic; the NFL honcho lauded Errol Spence and Ugas as real-deal fighters. “We’re so proud of Errol, he’s from here in DeSoto,” Jones said. “But the main reason I’m proud of him, when he fights at this stadium he brings the crowd with him.” Jones noted that the Hispanic fan base enjoyed by the Cowboys transcends into boxing, and he promised patrons an exciting night. He finished by giving boxing props, because it’s all on the individual to rise up, there are no teammates to lean on.

Showtime boxing boss Stephen Espinoza had time at the mic. He started by citing the Theodore Roosevelt speech, the “man in the arena” passage, which synopsizes so well the stakes on hand for pugilists.

This is the passage fighters sometimes refer to when they get irked at Sofa Joes busting on them on social media.

Critics can and do throw barbs, but credit must be due those that enter the ring, because they take on considerable risk, and spill sweat and blood in the process, that’s the message. “This fight features two of boxing’s best ambassadors,” he continued. He touched on the adversity both athletes have navigated to get to here.

Errol Spence had that near death experience when he drank, then drove too fast and flipped his Ferrari on October 10, 2019.

He healed up, and, amazingly, has come back to fight at pre-crash level. Ugas, too, has had to scuffle; he came from Cuba, he tried to make it to USA six times, before on his seventh try, on a tiny raft, he succeeded.

Spence trainer Derrick James spoke to the assembled, and he gave Ugas props for getting to this place.

Ugas has to be considered a very live ‘dog.

James said he spoke to Ugas the night the Cuban fought Manny Pacquiao, and wished him well that night. “You’ll see the best of Errol Spence, because Ugas will bring it out of him. I’m looking forward to the challenge,” the Texas trainer stated.

My Three Cents: It will be interesting to see if Spence is a bit more lively, has more pop, this time around because of what he referenced, that he’s had ample time to train and isn’t having to cut weight in camp. It would be helpful if that were the case, because Ugas is heavily skilled, and the fight could be high level physical chess, unless Spence is able to show an obvious power edge against the 35 year old underdog.

Stevie Nicks slams Putin: ‘You really have no friends’