Essential Politics: Biden heads to Europe as a wartime leader (who’s staying out of the war) 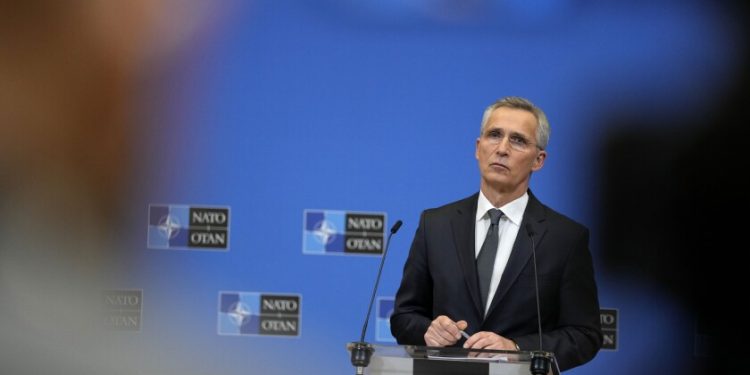 When President Biden made his first trip to NATO headquarters in Brussels nine months ago, he asserted during a news conference that “America was back.”

After his remarks, the press corps hustled outside for a photo op of Biden standing with NATO Secretary General Jens Stoltenberg beside a mangled piece of steel from the World Trade Center.

We couldn’t hear what they said to each other. But the symbolism of the two leaders next to the Sept. 11, 2001, memorial was clear — a reminder of the only time the alliance’s mutual defense provision has ever been invoked. After four years of Biden’s predecessor openly questioning the North Atlantic Treaty Organization’s relevance, Biden was recommitting to the alliance and the principle at its core: that an attack against one member would be considered an attack against all.

As he flies back to Brussels today for an emergency NATO meeting, Europe is home to a war in the decades since the organization’s founding in the aftermath of World War II. No doubt, Russia’s unprovoked invasion of Ukraine has given NATO new purpose, as democratic allies have responded with vigor. Biden’s task this time, though mostly symbolic, will be to ensure the alliance maintains its resolve in applying economic pressure on Russian President Vladimir Putin in hopes of forcing him to stop his month-old attack on Ukraine.

It’s another week of consequential events in Europe. Meanwhile, back in Washington, Biden‘s first Supreme Court nominee is being grilled by senators.

Good morning, and welcome to Essential Politics. Buckle up.

Since Russia’s invasion on Feb. 24, Biden has gotten credit for unifying NATO behind a swift and severe sanctions package — and deservedly so. His reluctance to impose sanctions beyond what European partners were ready to do — and his deliberate deference — has reflected a strong commitment to ally management.

But Biden’s return to NATO headquarters Thursday is hardly a victory lap given that a war he and other allies had hoped to prevent shows no sign of abating, despite stiff economic sanctions imposed on Moscow and Putin’s stunning lack of military gains. Moreover, it’s hard to see what this historic gathering of allies could mean for Ukraine beyond symbolism, although Biden’s national security advisor, Jake Sullivansaid Tuesday that there would be real “deliverables” from the trip — more sanctions (or the enforcement of existing ones), “joint action” aimed at reducing Europe’s dependence on Russian natural gas and new U.S. contributions to humanitarian response efforts.

But the trip, at its core, is about demonstrating — and maintaining — unity throughout the alliance as Putin’s war drags on.

“This war will not end easily or rapidly,” Sullivan said, predicting more “hard days ahead” for Ukraine’s military and civilians. Biden’s traveling to meet with democratic allies, he added, is an effort to make sure the West stays united in its response and “to send a powerful message that we are prepared and committed to this for as long as it takes.”

And for all Biden’s behind-the-scenes diplomacy keeping NATO members together, there is no question that the individual who is most responsible for the alliance’s newfound commitment and cohesion is Putin. His invasion, as I wrote last month, almost immediately spurred Germany to increase its defense budget after years of foot-dragging in Berlin and nudged other long-neutral countries such as Finland and Sweden closer to applying for membership.

But the new recognition of the real threat Putin poses came too late for Ukraine, which applied for NATO membership in 2008. And while the U.S. and numerous NATO allies have shipped Ukraine billions in defense aid, they have also been clear about their shared desire to not get drawn into a military conflict that Biden and others have said would amount to “World War III.”

Warsaw stop could be more complicated

After three meetings in Brussels on Thursday — with NATO members, Group of 7 leaders and European Union heads of state — the president will fly Friday to Warsaw, where he’ll more directly confront several challenges that have arisen since Russia launched its invasion.

The only item on Biden’s public schedule so far is a meeting Saturday with Polish President Andrzej Dudabut it’s expected that he will visit a refugee camp at some point to show solidarity with the millions of Ukrainians who have fled their country and the nations struggling to absorb them.

Poland is the largest country on NATO’s eastern flank, bordering both Ukraine and Belarus, a close Russian ally that is fighting alongside Putin’s forces. Poland has been overwhelmed by a flood of more than a million refugees from Ukraine. Officials have expressed concern about a lack of available housing, schooling and medical care.

Additionally, Poland’s geography has raised concerns about the possibility of a Russian incursion into NATO territory that could expand the conflict dramatically. A recent Russian missile strike that killed 35 people took place just 15 miles from the Polish border.

The public disagreement between Warsaw and Washington over plans to deliver Soviet MiG-29 aircraft to Ukraine marked a rare instance, thus far, of diplomatic discord between the U.S. and allies. Warsaw, which had hoped to donate the aircraft, took Washington by surprise when it suggested that the U.S. help facilitate the planes’ delivery to Ukraine — a proposal the Biden administration quickly declared to be untenable.

Pressed on the matter, the White House said that the Pentagon had determined that other weaponry would be more helpful to Ukraine’s defense and that flying the planes into contested Ukrainian airspace from a NATO country could be considered unnecessarily provocative.

The view from Washington

It’s hard to recall a Supreme Court confirmation hearing that hasn’t been the dominant story in American media, but another effect of the war and Biden’s travel to Europe has been to somewhat counter-program the Senate hearings this week of his first nominee to the nation’s highest court.

— Rep. Sheila Jackson Lee (D-Texas), who is attending Judge Ketanji Brown Jackson’s confirmation hearings, called the Republican National Committee “shameful” after it posted a GIF that crossed off Jackson’s initials and replaced them with “CRT,” a reference to critical race theory.

— Jackson repeatedly declined to give a response on the issue of court-packing, telling the Senate Judiciary Committee that it is a policy matter that should be left to Congress.

— David G. Savage, our great Supreme Court reporter, and Nolan D. McCaskill, who covers Congress for us, sum up Tuesday’s hearing by writing that Jackson spent the day beating back “Republican claims that she was lenient toward criminal defendants, including those convicted of possessing child pornography.”

— And McCaskill has a look at the historic nature of Jackson’s nomination and the effort by progressive groups to defend her from criticism that they plan to rebut by characterizing it as sexist and racist.

— It’s a memory burned into my brain: President Trump being asked his thoughts about Putin declaring that Western liberalism was dead and responding by stating that “he sees what’s going on … in Los Angeles [and] in San Francisco.” His misunderstanding of the question aside, Trump was caricaturing famously liberal cities run by progressive politicians. The stereotype, Seema Mehta shows in this great piece on San Francisco Mayor London Breedis no longer an absolute. Not only is she taking a harder approach to crime, homelessness, addiction and education in a city “known for its liberal, live-and-let-live ethos,” she’s winning support for doing so.

— The Los Angeles mayor’s race is not immune from the broader trend of diminishing civility in our politics. Homelessness activists “shut down a candidate forum at a San Fernando Valley synagogue on Monday, screaming profanities at the candidates and organizers before it ended early,” David Zahniser and Benjamin Oreskes report. “Friends, we are in a house of worship,” the rabbi said, trying to quell the disruption, to no avail. (You can read more from Zahniser and Oreskes in The Times’ L.A. on the Record newsletter. Sign up here.)

— “Voters from all demographic and political backgrounds express serious doubts about the quality of education in Los Angeles” — that was the conclusion from a new survey tracking attitudes about education in L.A. Howard Blume has a good write-up on the findings, which showed that 7 in 10 Angelenos believe that not all neighborhoods have a quality school, and that 78% believe that underserved communities are hurt by a lack of access to online learning.

How Fintech Is Disrupting Wealth Management