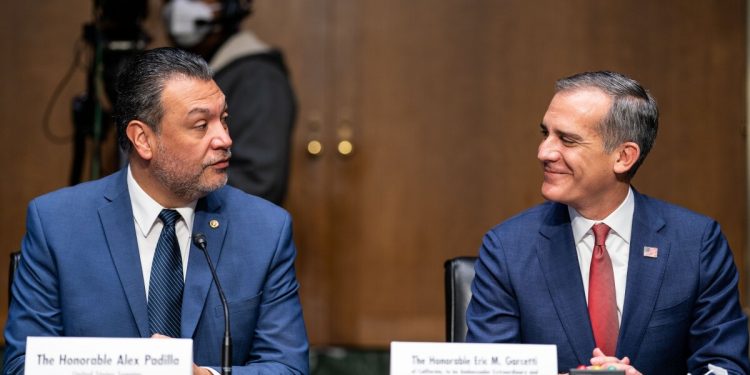 
The story of Rick Jacobsthe former senior aide to Los Angeles Mayor Eric Garcetti who allegedly sexually harassed people in the mayor’s orbit, is well-trodden ground in Los Angeles. But Jacobs’ saga — as well as questions about whether Garcetti turned a blind eye to the abuse while employing Jacobs — has flown far under the radar in Washington, even as Garcetti has faced Senate confirmation to be ambassador to India.

That changed in recent days, as Washington is now asking what Garcetti knew and when. That raises new questions about whether and when Garcetti might get confirmed in a 50-50 Senate where he will likely need support from every single Democrat.

Pulling a nomination would not only be a huge professional setback for the mayor, it would be embarrassing for the White House, which has had to pull a handful of nominees because of a lack of support in the Senate.

President Biden nominated Garcetti to the post eight months ago. While many Biden nominees have been trapped in the Senate, Garcetti’s nomination has moved particularly slowly.

A key Senate Republican late last week expanded his investigation into whether the mayor was aware of the abuse, and a Senate Democrat said she’d like to see more corroboration of Garcetti’s denial.

Jacobs has denied the allegations. Garcetti has said under oath and before Congress that he didn’t know about the allegations against his aide, and if he had, he would have done something about it.

Its. Charles E. Grassley (R-Iowa) said he would continue the work on the investigation at least through the Senate’s next recess, which is due to end April 25.

“I don’t have a definite date when we’re going to get done, but I know it won’t be until after we get back after the recess,” Grassley said in a brief interview in the Capitol.

Perhaps more problematically, a Democratic senator on Tuesday said she would like more information on Garcetti’s denial.

“I understand that he testified he didn’t know anything about it. I’d just like to get further corroboration on that situation,” said Sen. Mazie Hirono (D-Hawaii), who since 2018 has been asking every judicial nominee about whether they have ever been accused of sexual assault or harassment. “I’m still gathering information. I’m not prepared to tell you one way or the other today,” she said when discussing whether she had any concerns about the nomination.

It has taken well over a century, but finally lynching is a federal hate crime, according to a bill signed into law Tuesday by President Biden.

Since it was first introduced in 1900, lawmakers tried more than 200 times to make lynching a federal hate crime.

The Emmett Till Anti-Lynching Act is named in honor of a 14-year old Black boy who was kidnapped and tortured to death in Mississippi in 1955. The law will designate conspiracies to commit crimes, in which hate is the motivating factor and which result in death or serious bodily injury, as federal hate crimes punishable by up to 30 years in prison.

Its passage comes nearly two years after the murder of George Floydan unarmed Black man, by a Minnesota police officer who knelt on Floyd’s neck for nearly 10 minutes. Captured on cellphone video, the killing evoked memories of Till’s murder and countless more recent instances of police brutality against Black Americans. It quickly prompted calls for police reform. When lawmakers failed to reach a compromise on legislation to overhaul law enforcement training and practices, the anti-lynching legislation became a fallback of sorts.

Senses. Cory Booker (D-N.J.) and Tim Scott (R-S.C.) introduced the Senate version, which was passed unanimously by a voice vote this month. Rep. Bobby L. Rush (D-Ill.) was the lead sponsor of the House version, which in February passed in a 422-3 vote. Republican Reps. Andrew Clyde of Georgia, Thomas Massie of Kentucky and Chip Roy of Texas were the only lawmakers to vote against the bill.

“Perpetrators of lynching got away with murder time and time again — in most cases, they were never even brought to trial,” Rush said. He called the act a unique weapon of “racial terror that has for decades been used to maintain the white hierarchy.”

The view from Washington and the world

— Russian negotiators Tuesday offered to pull back attacks on the Ukrainian capital of Kyiv in a step toward ending the war between the two nations, but U.S. and Western officials remained skeptical of Moscow’s true intentions, my colleagues Patrick J. McDonnell, Jaweed Kaleem and Tracy Wilkinson report. The offer came as Russian and Ukrainian officials held a new round of talks and Ukrainian forces continued to mount fierce resistance in northern parts of the country against a relentless campaign of Russian shelling and missile attacks that have destroyed residential neighborhoods, hospitals and fuel storage depots. But rather than ending the war, it seemed more likely that Russian President Vladimir Putin was merely shifting focus to the eastern and southern parts of Ukraine, where his forces have moved deeper into the separatist Donbas region and battered the coastal town of Mariupol. “We will judge Putin and his regime by his actions, not by his words,” British Prime Minister Boris Johnson said through a spokesman.

— Since taking office and through her toughest hours, the roster of confidants Vice President Kamala Harris relies on for advice and support has contracted and tilted away from her longtime home base of California, Noah Bierman and Melanie Mason report. The narrowing of her inner circle reflects both the demands of the vice presidency, which leave little time for social calls, and her own tendency to be selective in whom she seeks counsel, according to interviews with longtime friends, advisors and current and former staffers.

— Former President Trump “more likely than not” attempted to illegally obstruct Congress when he tried to subvert the 2020 election on Jan. 6, 2021, a federal district court judge determined in a ruling Monday that ordered California lawyer John Eastman to hand over emails to the congressional panel investigating the insurrection. U.S. District Judge David O. Carterwho is based in Santa Ana, broadly stated that Trump likely committed felony obstruction of Congress and that Trump and his then attorney Eastman likely engaged in a conspiracy to obstruct Congress, Sarah D. Wire reports.

“Based on the evidence, the court finds it more likely than not that President Trump corruptly attempted to obstruct the Joint Session of Congress on January 6, 2021,” Carter wrote.

“Eastman also understood the gravity of his plan for democracy,” the judge wrote. “… The evidence shows that Dr. Eastman was aware that his plan violated the Electoral Count Act. Dr. Eastman likely acted deceitfully and dishonestly each time he pushed an outcome-driven plan that he knew was unsupported by the law.”

— A group of truck drivers that have protested COVID-19 mandates in the Washington area for several weeks is returning to California to protest bills coming up for votes soon in the Legislature, organizers said Sunday, Jaimie Ding reports. The caravan of semis, pickups and RVs, dubbed the People’s Convoy, will depart Hagerstown, Md., where drivers have been camped out at the Hagerstown Speedway. The convoy has circled the D.C. Beltway in daily protest for weeks, calling for an end to COVID-19 masking and vaccination requirements as well as the federal government’s COVID-19 emergency declaration. At one point, the convoy entered the city and clogged up the streets.

— The first Latina to serve on the California Supreme Court was sworn in Monday as officials praised the historic elevation of appellate Judge Patricia Guerrero to the state’s highest court. “It made history for us and the future of California,” said Chief Justice Tani G. Cantil-Sakauye. She added that “it is such a substantive and well-deserved appointment.” Guerrero’s ascension after being confirmed last week restored the four-female majority on the seven-member court, Cantil-Sakauye noted.

— On the heels of the driest ever start to the year in California, Gov. Gavin Newsom on Monday issued a sweeping executive order calling on local water suppliers to implement more aggressive conservation measures as reservoirs dwindle and residents backslide in their efforts to cut back. Specifically, the order requires that urban water suppliers activate “Level 2″ of their locally customized contingency plans, meaning they must prepare for a shortage of up to 20%. The order also introduces steps to address a frenzy of well drilling in California’s Central Valley and directs state regulators to consider a ban on watering decorative grasses at businesses and public properties, among other measures.

Sign up for our California Politics newsletter to get the best of The Times’ state politics reporting.

US Mulls Releasing 1 Million Barrels of Oil a Day From Reserves: BBG