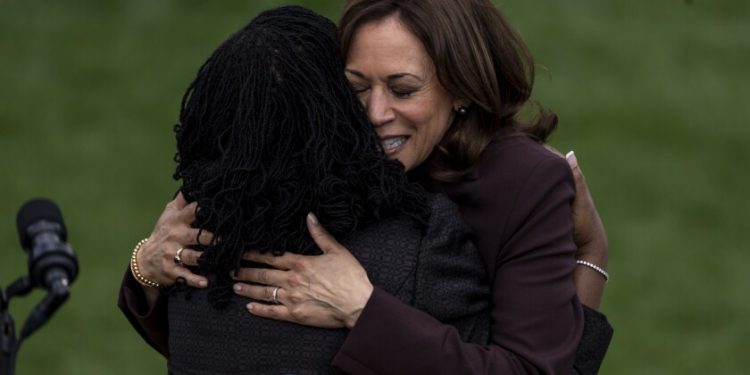 Could a raft of high-profile figures testing positive for the virus in recent days signal that the next wave of coronavirus infections may soon hit the U.S.?

Atty. Gen. Merrick Garland, Commerce Secretary Gina Raimondo and Rep. Adam B. Schiff (D-Burbank) tested positive for the virus, after attending the Gridiron Club dinner on April 2 alongside 700 people, many of whom were my colleagues and friends. Dozens of others at the dinner caught it. House Speaker Nancy Pelosi (D-San Francisco)who did not attend the event, tested positive last week.

This uptick, however, is not disrupting life like it once would have. In Washington, swanky events, like the White House Correspondents Dinner, remain on the schedule, and city officials have not reintroduced coronavirus restrictions. Congressional lawmakers, President Biden and Vice President Kamala Harris continue to mingle maskless indoors. Are those signs the virus has lost its punch? Or are the country’s leaders simply pulling masks over their eyes?

Hello, besties. I’m Erin B. Logan, a reporter for the L.A. Times covering the Biden-Harris administration. Today, we are going to talk about the current state of the COVID-19 pandemic and what public health experts make of the White House’s response to the recent rash of infections.

In Washington, it’s business as usual

No one should be surprised by the uptick in case counts. The history of this pandemic suggests that our nation experiences a wave shortly after infections rise overseas. In China, Europe and the United Kingdom, the extremely contagious Omicron subvariant BA.2 is being blamed for a rise in cases in recent weeks.

In the states, the BA.2 subvariant accounts for over 85% of all new cases nationwide, according to federal statistics. And the rise in positive test results in the Northeast suggests the nation may be on track for a new wave. Yet, the rash of infections in elite Washington circles has not been met with urgency from the Biden administration.

“We’ve got to watch this very carefully, obviously. I never like to see infections rising. I think we’ve got to be careful,” Jha told NBC’s “Today” show. “But I don’t think this is a moment where we have to be excessively concerned.”

Jha’s attitude echoes the actions of administration officials, including Harris. The vice president, for example, continues to attend indoor events without a mask, despite being a close contact of at least two infected people. One was her husband, Second Gentlemen Doug Emhoffand the other was Communications Director Jamal Simmons. Harris presided maskless over the final confirmation vote of Judge Ketanji Brown Jackson in the Senate Chamber on Thursday and embraced the incoming Supreme Court Justice at an outdoor event the following day.

A host of lawmakers were in close proximity to others who attended the event and later tested positive for the coronavirus shortly after the historic confirmation vote.

Pelosi tested positive the day after appearing maskless at a bill signing ceremony at the White House. The House speaker stood next to Biden and was inches away from Senate Majority Leader Chuck Schumer of New York and Rep. Jim Clyburn (D-SC) as the maskless president signed the Postal Service Reform Act of 2022 in the State Dining Room.

As of Monday, Biden has not tested positive and is proceeding through his daily schedule as normal, White House officials said.

The White House seems to have come to the conclusion that Biden is likely to eventually contract the virus (he has been vaccinated and received two booster shots). Last week, perhaps to prepare the country for such an eventuality, White House Press Secretary Jen Psaki told reporters that “like anyone else, the president may at some point test positive for COVID.”

(Neither Harris nor Biden attended the Gridiron dinner on April 2 that resulted in so many infections. At least 80 people who attended the dinner tested positive as of Monday, according to Annie Linskey of the Washington Post.)

Hospitalization as the new key metric

Public health experts say the lack of urgency from the White House makes sense for a variety of reasons.

“We have reached a different point in the pandemic,” said Dr. Leana Wena public health professor at George Washington University.

Over 75% of American adults are fully vaccinated, and nearly half have received their first booster shot, according to federal statistics, dramatically decreasing the risk of death and severe illness.

“What matters at this point is not infection, but severe disease,” Wen said. “And as long as our hospitals are not overwhelmed and there is no sign that they will be, that should be the true metric. Not infection.”

Certain restrictions — like mask mandates and social distancing — should only return to “blunt the peak of hospitalizations,” said Dr. David Dowdyan epidemiologist at the Johns Hopkins Bloomberg School of Public Health, adding that it was not clear that such admissions are rising.

“I’m not sure that we’re really at a point where that sort of blanket measure would make sense yet,” he said.

Coronavirus restrictions have proven to be ineffective in entirely preventing infection, Dowdy said. “What they do is they spread out the timing of those infections, for the most part. So that if you’re trying to take the edge off of a peak of hospitalizations or overcrowded emergency rooms, those are very effective measures.”

Both Dowdy and Wen said individuals should be cautious about exposing vulnerable immunocompromised people to the virus.

Wen said she hoped Congress would soon pass $10 billion in COVID-19 funding, which has run into opposition from Senate Republicans. The figure is less than half of what the White House had requested, but it would help ensure the federal government can provide access to testing and vaccines, tools that Wen said are essential to return to normalcy.

“It would be such a shame if we have all the tools at our disposal, and we’re not using them,” Wen said. “Individuals should be able to return to their everyday lives, but the government needs to do its part in order to provide the tools that help people to get back to pre-pandemic normal.”

The latest from the campaign trail

— Wisconsin Gov. Tony Eversa Democrat seeking reelection in November, on Friday vetoed a package of bills passed by the Republican-controlled Legislature that would have changed the battleground state’s election laws, the Associated Press reported.

—Democrat Lourin Hubbard will advance to the June runoff election for the seat held by former Rep. Devin Nunes (R-Tulare), Times writer Priscella Vega reported. Hubbard’s opponent will be Connie Conwayformer California Assembly minority leader, who served on the Tulare County Board of Supervisors before being elected to the Assembly in 2008. The Republican has led the vote count since polls closed Tuesday night. Neither candidate has filed to run for Congress in the fall, when district boundaries will change.

The view from Washington

—Biden on Tuesday visited Iowa and announced the suspension of a federal rule preventing the sale of higher ethanol blend gasoline this summer, the Associated Press reported. The move is designed to ease the price of gas, which has spiked. Most gasoline sold in the U.S. is blended with 10% ethanol. The Environmental Protection Agency will issue an emergency waiver to allow the widespread sale of 15% ethanol blend that is usually prohibited between June 1 and Sept. 15 because of concerns that it adds to smog in high temperatures.

—Biden and his top Cabinet members spent much of Monday lobbying their Indian counterparts in a so-far-unsuccessful bid to persuade the world’s largest democracy to join the U.S.-led movement to support Ukraine against Russia’s military onslaught, Times writer Tracy Wilkinson reported.

—Mayor Eric Garcetti’s confirmation to the India ambassadorship has run into trouble as Senators weigh the veracity of sexual harassment allegations lodged against his former aide Rick Jacobs and the mayor’s handling of the alleged claims, Times writers Dakota Smith and Jennifer Haberkorn reported. Sen. Charles E. Grassley (R-Iowa), who has been conducting an investigation into Garcetti, said Thursday that he doesn’t expect to conclude an investigation into the claims until after the Senate returns from recess on April 25.

—President Biden is nominating an Obama-era U.S. attorney to run the Bureau of Alcohol, Tobacco, Firearms and Explosives, as his administration unveils its formal rule to rein in “ghost guns,” the privately made firearms that are increasingly cropping up at crime scenes, the Associated Press reported.

— A year after the creation of sweeping laws to increase the construction of duplexes and small apartment buildings, California lawmakers have turned their attention to easing the burdens of homeownership for first-time buyers, Times writer Hannah Wiley reported.

—Voters upset over crime and a seemingly limitless geyser of cash have propelled Rick Caruso to the front of the race for mayor, reshaping the contest and offering Los Angeles a stark contrast between the billionaire developer and his chief rival, Rep. Karen BassTimes writer Benjamin Oreskes reported. If the primary was on Monday, Caruso, with backing from 24% of likely voters, and Bass, with 23%, would head to the November runoff, according to a new UC Berkeley Institute of Governmental Studies poll co-sponsored by the Los Angeles Times.

—An estimated 2.4 million Californians could see a boost in their tax refunds next year under a legislative proposal that would dramatically increase the state’s renters’ tax credit for the first time in more than four decades, Times writer Mackenzie Mays reported.

That’s it, friends! don’t forget to sign up for our California Politics newsletter to get the best of The Times’ state politics reporting and to follow me on Twitter and send pictures of your pets to erin.logan@latimes.com.

A Dive Into the Largest Mid-Cap ETFs

Spring cleaning tips that won’t stress you out

Spring cleaning tips that won't stress you out