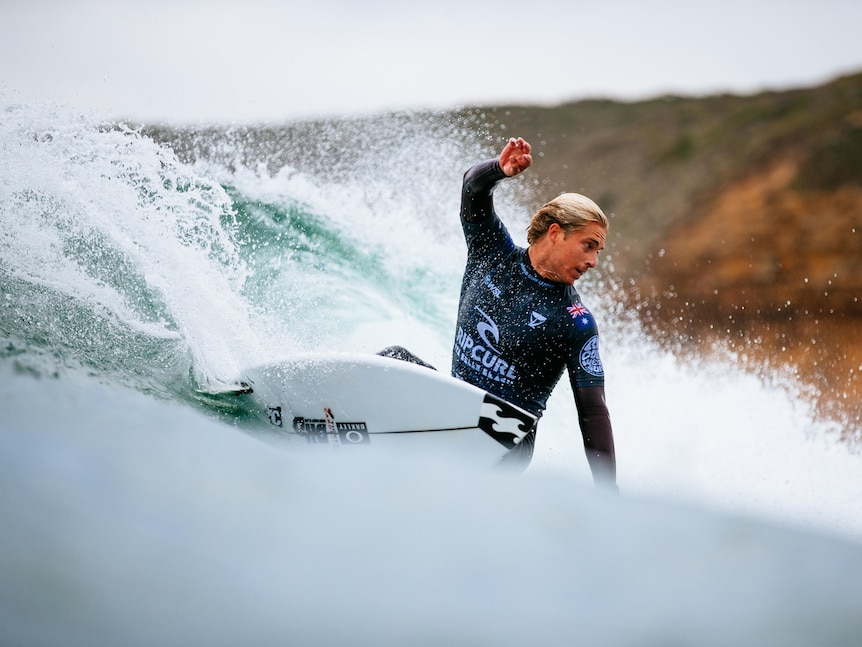 Ethan Ewing has taken down Olympic bronze medallist Owen Wright in an all-Australian affair to secure a spot in the semi-finals of the World Surf League event at Bells Beach.

Ewing produced a two-wave total of 16.33 in Saturday’s quarterfinal to easily eclipse Wright (11.17).

Although Wright fell short of making the final four, his best result of the year has boosted his chances of making the WSL’s 24-man mid-season cut, which will take place after the upcoming Margaret River Pro.

Ewing, who reached the semi-finals at Sunset Beach in Hawaii earlier this year, will now take on Brazilian Filipe Toledo for a spot in the Bells Beach final.

Three-time world champion Mick Fanning, who made the round of 16 at Bells as a wildcard after coming out of retirement for the event, was full of praise for Ewing.

“It’s a really different Ethan we’re seeing in this heat, this is an aggressive Ethan, which I like,” Fanning said on the WSL commentary.

Toledo pulled off a 9.63-ride in the opening minutes of the heat to set the tone, but Florence fought back to ensure the quarterfinal went down to the death.

With 30 seconds to go Florence set off on a wave needing a 7.98 for victory, but he suffered a wipe out after attempting a sharp turn.

“He really needed something big. It got heavy on him,” Fanning said.

“You’ve been there before. When you need a big score you want to throw everything at it, but sometimes it just doesn’t happen.”

Robson and Robinson will meet in the second semi-final, guaranteeing at least one Australian will make the final.