The European Union’s ambassador to the UK has urged the government to maintain the bloc’s trust as Brussels prepare to take legal action against the government over the Northern Ireland Protocol.

João Vale de Almeida, the bloc’s chief diplomat to the UK in London, said on Thursday morning that the two sides would find it harder to reach solutions to post-Brexit problems if “levels of trust go down”.

The European Commission is expected to file legal proceedings against the government in the coming days in response to what it says is a violation of the post-Brexit treaty for Northern Ireland.

The government said the “temporary and technical” measures were necessary for preventing further disruption to Northern Ireland’s supply chains as the province adjusts its new trading arrangements with the rest of the UK.

The new red tape for trade across the Irish Sea has already led to shortages of certain items in Northern Irish supermarkets and prompted some businesses in Great Britain to pause their shipments to Northern Ireland.

However, the European Commission said the move was a breach of the Northern Ireland Protocol, signed off by both sides in December as part of the Brexit deal, as it was not agreed with the EU beforehand.

Almeida said for the UK and EU to have the “best possible relationship” after Brexit, “we need high levels of trust”.

“Trust is the most important commodity in international relations. When there is no trust and levels of trust go down, you are less capable of finding solutions,” he said.

Almedia said that the two sides to have a “constructive” and “fruitful” relationship, “we need to make an effort to change the mindset and give up trying to score points on disputes of the past”.

He added: “We will have differences as we have seen in the last few weeks.

“But we have to approach them not in a confrontational way, not in a conflictual way, but in a way that aims at what we can bring to our citizens and our businesses.

“They should be the focus of all of our actions”. 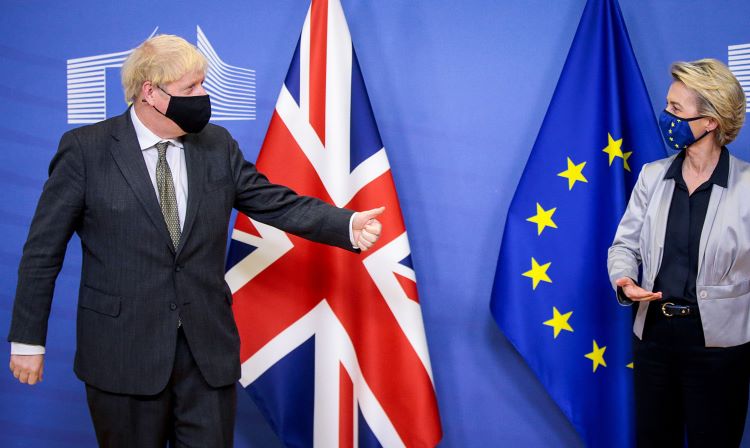 The government has a thorny relationship with Brussels since signing their post-Brexit free trade deal before before the New Year, with rows over the UK’s handling of the Northern Ireland Protocol, the bloc’s ditched plan to impose controls on vaccine exports to the UK, and the government’s refusal to grant the EU’s delegation to the UK full diplomatic status.

This week European Council President Charles Michel caused outrage in the UK by suggesting that the UK government had implemented an “outright ban” on exports of coronavirus vaccines to Europe. Boris Johnson on Wednesday told MPs that the claim was false.

The government has also accused the EU of unfarily blocking live shellfish exports from the UK. Brussels says the rules for cockles, mussels and other shellfish from non-member states are clear and long-standing.

Almeida admitted that “the first months and years” after the UK’s departure “will be particularly difficult because it’s all about adapting and adjusting to the new realities and new rules”.

However, he stressed that the two sides would have a “special relationship” going forward based on the “fundamental values” of democracy, human rights, open markets and the rule of law, and that he was “very happy to see” the UK chairing the G7 and hosting this year’s COP26.

“The world is a complex place today,” he said.

“Our way of life and values are being challenged across the globe and the planet is facing serious problems. We have a common responsibility in addressing all of these issues.

“This is a good moment for us to highlight and bring to the surface what unites us and the things we can do things together”.