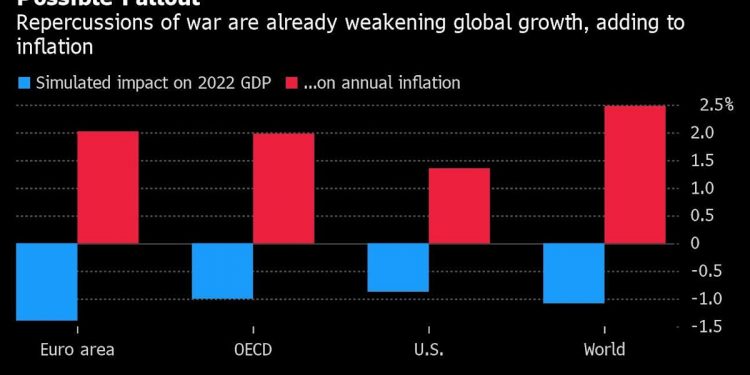 Most Read from Bloomberg

Euro-zone inflation surged to a record 7.5% in March from a year ago as Russia’s war in Ukraine further boosted already soaring energy costs.

While that’ll cost consumers about 230 billion euros ($254 billion) this year, household savings should help cushion the blow. In the U.S., the Federal Reserve’s preferred inflation gauge rose to a fresh four-decade high, and China’s Covid lockdowns threaten to disrupt supply chains and push up prices even more.

Here are some of the charts that appeared on Bloomberg this week on the latest developments in the global economy:

Euro-zone inflation accelerated to a fresh record high as Russia’s invasion of Ukraine roiled global supply chains and provided a fresh driver for already-soaring energy costs. Combined with inflation overshoots this week from Spain and Germany, the data prompted investors to bring forward bets on when the European Central Bank will end almost eight years of negative interest rates.

The energy crisis gripping the euro area will inflict an extra bill on consumers equivalent to 1.8% of its gross domestic product, according to analysis by Bloomberg Economics. Increased heating and electricity costs, along with higher prices of fuel for motorists, will combine to add 230 billion euros ($255 billion) to households’ expenses, Jamie Rush and Maeva Cousin estimate.

U.K. households saved less of their income in the final quarter of last year to maintain living standards in an early sign of the pressures they face from runaway inflation.

The U.S. added close to half a million jobs in March and the unemployment rate fell by more than expected, highlighting a robust labor market that’s likely to support aggressive Fed tightening in the coming months.

Inflation-adjusted consumer spending declined in February, suggesting the fastest pace of price increases in four decades is starting to temper demand. Spending on goods settled back after the prior month’s surge, while a decline in Covid-19 cases supported a pickup in outlays for services.

U.S. business profits surged 35% last year, the most since 1950, driven by strong household demand as the economy bounced back from the pandemic. In all four quarters of the year, the overall profit margin stayed above 13%, a level reached in just one other three-month period during the past 70 years, Commerce Department data show.

China’s Covid lockdowns are putting the economy under strain and threatening to disrupt global supply chains, prompting Beijing to call for more contingency plans to deal with the risks. Purchasing managers’ indexes for March showed lockdowns in the technology and trade center Shenzhen and automotive city Changchun cut factory activity in the month. Services have also been hit hard.

Japan’s factory output in February eked out the first gain in three months, offering only a tepid sign of resilience amid fears the economy has slipped back into reverse. The fractional gain comes at a time when the Japanese economy needs strong manufacturing to help the economy avoid a contraction this quarter and to power a recovery going ahead.

Colombia surprised markets with a smaller-than-expected interest rate increase after the central bank was criticized by senior politicians. Analysts had expected a bigger boost given recent inflation shocks and an economy that is now operating close to full capacity. Central banks in Chile, Czech Republic and Mozambique were among those that also hiked rates.

An exodus of foreign workers from Saudi Arabia started to reverse after a year and a half as the economy recovers from the pandemic and oil prices rally. Job creation is the biggest challenge facing Crown Prince Mohammed bin Salman, the kingdom’s de facto leader, as he reshapes an economy dependent on exporting oil and importing foreign labor.

Governments are not sufficiently aware of the longer-lasting economic fallout from Russia’s invasion of Ukraine, says Laurence Boone, OECD’s chief economist. Earlier this month, the Paris-based OECD estimated that the conflict’s effects will reduce global growth this year by more than 1 percentage point and drive up inflation another 2.5 percentage points from already-high levels.

Most Read from Bloomberg Businessweek

Roy Williams’ ‘two favorite teams’ will play for title. Here are his thoughts on KU-UNC