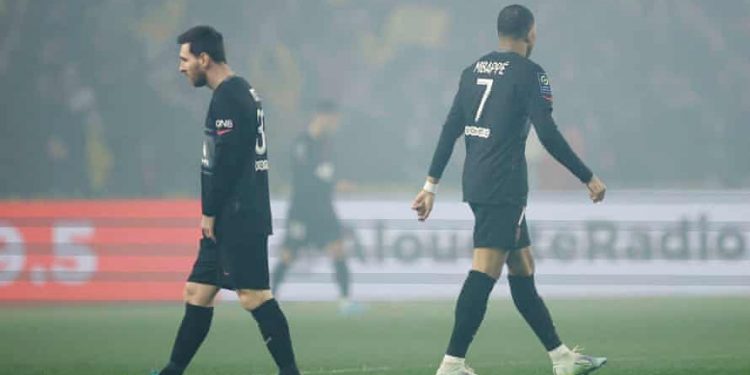 
Real Madrid dug deep in a 3-0 home win against lowly Alavés, scoring all three in the last 27 minutes of the game after the visitors gave them a few scares early on and threatened to pull off an upset at the Bernabéuon Saturday.

Marco Asensio roused the Bernabéu in the 63rd minute with a brilliant curled shot into the top right corner from outside the box.

Vinicius Jr extended the lead a few moments later, and Karim Benzema added one more with a last-minute penalty kick. The La Liga leaders moved up to 57 points from 25 games.

Atlético Madrid recovered from their shock midweek defeat by basement club Levante with a comprehensive 3-0 thrashing of Osasuna.

Strikers João Félix, Luis Suárez and Ángel Correa were on target to lift Diego Simeone’s side to fourth spot.

The goal would have come as a huge relief for Portugal international Félix who was making only his third start in Atlético’s last 15 league matches. The €126m striker rifled in a rebound from a corner in the third minute and after the break assisted Suárez, who scored the second when he lobbed goalkeeper Sergio Herrera from 40 yards. Correa completed the rout with a last-minute counter-attack.

“It was a great collective effort, a huge commitment from our players,” Simeone said. “It’s a win that give us peace of mind and confidence to prepare for the Champions League match against Manchester United.”

Arnaut Danjuma scored a hat-trick to inspire Villarreal to a 4-1 win at Granada, which lifted them above Barcelona into fifth place, while Cádiz drew 1-1 with Getafe.

Hoffenheim came from behind to beat Wolfsburg 2-1 away from home to climb to fourth in the Bundesliga.

Denmark striker Jonas Wind fired Wolfsburg into the lead with a brilliant first-time finish in the 36th minute, scoring his first goal since joining the club from Copenhagen in January. Hoffenheim were fortunate not to fall further behind when Benjamin Hübner wasted a free header before Jérôme Roussillon spurned a double chance.

Hoffenheim made the hosts rue the missed opportunities when Danish winger Jacob Bruun Larsen levelled in the 74th minute and Croatia international Andrej Kramaric completed the comeback in the 78th, knocking a backheel from Christoph Baumgartner into the net. Hoffenheim were forced to cling on for the victory, with Wind being thwarted by goalkeeper Oliver Baumann and then having a goal ruled out for offside.

Anthony Modeste returned from illness to fire Cologne to a 1-0 win over Eintracht Frankfurt.

Modeste came on in the 61st minute and scored the winner in the 84th when he capitalised on a defensive mistake to shoot between goalkeeper Kevin Trapp’s legs and score his 15th goal of the season.

Relegation-threatened Stuttgart conceded a penalty in the third minute of injury time to draw 1-1 with Bochum. Eduard Löwen made the most of Mavropanos Konstantinos’s poor challenge on Sebastian Polter by cancelling out Armel Bella-Kotchap’s own goal from the spot and stretching Stuttgart’s dismal run to eight games without a victory.

Freiburg moved up to fifth place, also on 37 points, after winning 2-1 at Augsburg while Masaya Okugawa scored the only goal as Arminia Bielefeld beat Union Berlin.

Serie A leaders AC Milan averted a shock defeat to basement club Salernitana, with Ante Rebic rescuing a 2-2 draw with a late strike from long range.

Milan, who are chasing a first title in 11 years, went ahead in the fifth minute with a strike from Brazilian attacking midfielder Junior Messias after he had been released by full-back Theo Hernandez. Salernitana pulled level in the 29th minute through striker Federico Bonazzoli and then took a surprise lead in the 72nd with a diving header from Bosnian forward Milan Djuric.

The home side’s euphoria did not last long, however, as Croatian midfielder Rebic let fly with a low shot from outside the box which skidded into the far bottom corner of the net.

The draw meant Milan failed to extend their lead at the top of the table and they sit on 56 points after 26 matches, two ahead of neighbours and champions Internazionale, who have two games in hand and can regain top spot when they host Sassuolo on Sunday.

Roma fought back from two goals down to earn a 2-2 draw at home to Verona. Antonin Barak and Adrien Tameze stunned José Mourinho’s side with goals inside the opening 20 minutes but Cristian Volpato and Edoardo Bove came off the bench in the second half to score their first goals for the club and rescue a point.

Fabio Quagliarella scored twice in the first half to set Sampdoria on course for a 2-0 home win over Empoli.

Nantes stormed into a three-goal half-time lead and then rode their luck to win 3-1 at home on Saturday and hand runaway leaders Paris Saint-Germain their second Ligue 1 loss of the season.

Randal Kolo Muani put Nantes ahead within four minutes after a storming run down the left wing by Moses Simon, and they were 2-0 up some 12 minutes later when teenager Quentin Merlin scored his first goal for his hometown club with a rasping left-footed shot.

Nantes defender Dennis Appiah was sent off two minutes before the break for tripping Kylian Mbappé as he headed goalwards. But the referee was asked to review his decision by the VAR and changed it to a yellow card when replays showed the clash was not as cynical as first presumed.

VAR then intervened again in stoppage time before the break when Georginio Wijnaldum handled the ball in his own penalty box, handing Nantes a spot kick which Ludovic Blas converted for a stunning half-time lead.

PSG, who started the game 13 points clear of second-placed Marseille, pulled a goal back a minute into the second half as Lionel Messi set up Neymar for a clinical finish.