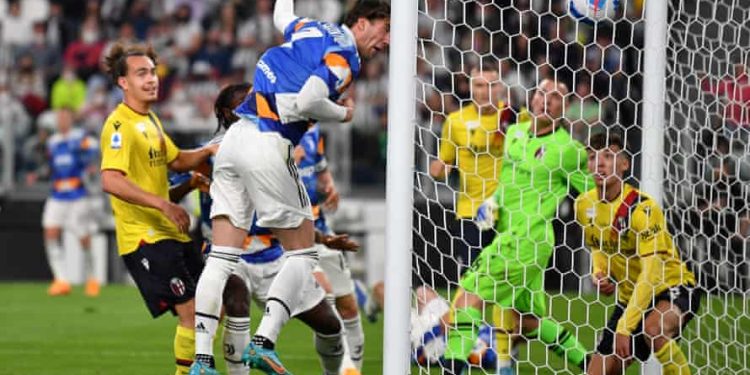 Dortmund are six points behind Bayern Munich with only a mathematical chance of the title. Six-time European champions Bayern, eliminated in the Champions League this week, can restore their nine-point lead with a win at struggling Arminia Bielefeld on Sunday. There are only four rounds remaining after this weekend.

Dortmund took control with three goals in a five-minute spell. The defender Tom Rothe headed home from Julian Brandt’s corner in the 24th; the midfielder Axel Witsel pounced two minutes later after Haaland broke free; and the defender Manuel Akanji turned in a free kick from Marco Reus in the 29th. Five minutes later, Emre Can netted with a shot from 20 meters that the goalkeeper Koen Casteels fumbled.

Haaland grabbed his first in the 38th when he was set up by Reus and shot past Casteels. The prolific Norway star made it 6-0 in the 54th after combining well with Brandt.

The midfielder Ridle Baku got a late consolation goal for Wolfsburg, who hadn’t scored on their previous five visits to the Westfalenstadion.

Hertha Berlin boosted their chances of staying up with a 1-0 win at Augsburg, thanks to an early second-half goal from Germany midfielder Suat Serdar. Stuttgart, who were one point behind Hertha in 16th, drew at mid-table Mainz 0-0.

After a poor first half, the Austria forward Marko Arnautovic stunned the home crowd with a composed finish in the 52nd minute to give Bologna the lead. That bolt out of the blue jolted Juve into action, with Danilo heading against the post before chaos ensued 10 minutes from time as Adama Soumaoro was sent off for being ruled last man when fouling Juve’s Álvaro Morata.

The referee was not done there, as he gave the Bologna defender Gary Medel two quick yellow cards before brandishing a red for protesting against Soumaoro’s dismissal.

Juve threw everything at the nine men in the dying moments, with Vlahovic pouncing from close range to break Bologna’s resistance right at the death.

The bottom side, Salernitana, gave their faint survival hopes a boost with 2-1 victory at fellow strugglers Sampdoria, while Lucas Torreira’s first-half strike earned Fiorentina a 1-0 win over Venezia.

Villarreal carried the momentum from their shock Champions League triumph over Bayern Munich to a 2-1 win at Getafe in La Liga.

Saint-Étienne moved out of the bottom three in Ligue 1 after they came from behind to beat Brest 2-1 with a first-half double from Mahdi Camara. Saturday’s late match saw Lens win 2-1 at Lille to move above the champions and into seventh, now just two points off the European places.