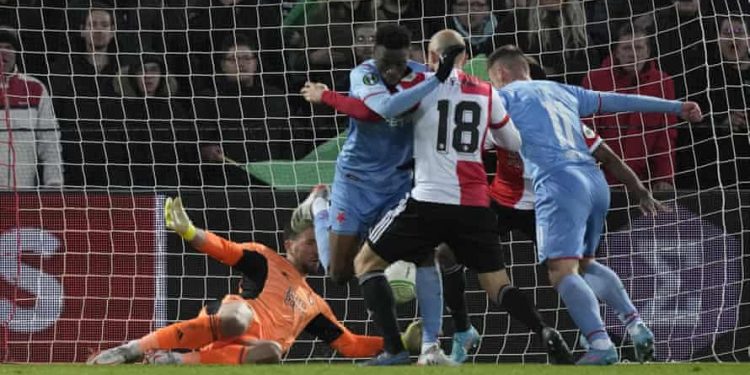 
Barcelona were shaken up by Eintracht Frankfurt but took a first step in their bid to reach the Europa League last four as a second-half goal by Ferran Torres salvaged a 1-1 draw in their quarter-final first leg on Thursday.

Torres cancelled out Ansgar Knauff’s fantastic first-half opener in a lively clash at the Waldstadion, in which the hosts finished with 10 men having put the competition favourites on the back foot.

Frankfurt soaked up the pressure early on, hoping to hit Barça on the break, but were in danger after three minutes when Kevin Trapp tipped Torres’s shot over the bar. Trapp was at it again to deny Pierre-Emerick Aubameyang but the game was to swing the German side’s way.

Sergio Busquets appeared to bring down Rafael Santos Borré in the area before the break but referee Srdjan Jovanovic overturned his initial penalty call out after a VAR review.

Eintracht kept going, though, and were rewarded three minutes into the second half when Knauff found the back of the net with a floating shot from outside the box after a poor clearance by the Barça defence.

Oliver Glasner’s team continued to play with a low block and were punished in the 66th minute as Torres beat Trapp with a low shot after a one-two with Frenkie De Jong, who had just come on.

Eintracht’s hopes of a late winner were dashed in the 78th when Tuta got a second yellow card for a rough challenge on Pedri, leaving his team to finish the game a man short.

RB Leipzig needed an own goal by Davide Zappacosta to salvage a 1-1 draw in an absorbing Europa League quarter-final first leg against Atalanta at the RB Arena.

Luis Muriel’s individual effort after 17 minutes gave the Italian side the lead as he cut into the box and evaded two challenges before sending a powerful shot past Leipzig goalkeeper Peter Gulacsi.

The hosts improved after half-time and got their equaliser just before the hour mark. Atalanta goalkeeper Juan Musso saved André Silva’s penalty and denied Willi Orban from the rebound but could not keep out Zappacosta’s header from the resulting corner.

Both teams hit the woodwork twice and Atalanta defender Merih Demiral cleared Nordi Mukiele’s shot off the goal line in stoppage time. Leipzig travel to Bergamo for the second leg next Thursday.

Braga hold a 1-0 advantage over Rangers, while West Ham, who ended with 10 men, and Lyon drew 1-1 at the London Stadium.

In the Europa Conference League quarter-finals, Feyenoord and Slavia Prague played out a thrilling 3-3 draw in their first leg in Rotterdam. The Dutch side took the lead through Luis Sinisterra in the 10th minute, before Peter Olayinka equalised shortly before half-time.

The sides then traded goals with Yira Sor giving Prague the lead in the 67th minute, only for Argentinian defender Marcos Senesi to equalise. Four minutes from time, Orkun Kokcu looked like giving the home side the advantage before next Thursday’s second leg, but deep into stoppage time, Ivorian midfielder Ibrahim Traoré levelled up the tie with an improvised flicked finish with his back to goal.

With Leicester also drawing, 0-0 against PSV Eindhoven, the other quarter-final first legs finished 2-1. Norway’s Bodø/Glimt hold a surprise advantage in their tie after Hugo Vetlesen’s late winner at home to Roma. The Italian side, fifth in Serie A, had taken the lead through Lorenzo Pellegrini two minutes from the break, before Ulrik Saltnes equalised 11 minutes into the second half.

Marseille hold the same advantage over Greece’s Paok Salonika, despite playing the closing moments with 10 men after Gerson was sent off four minutes into added-on time. The Brazilian midfielder had opened the scoring in the 14th minute, with Dimitri Payet making it 2-0 on the stroke of half-time with a sensational strike from the edge of the box.

Moroccan international Omar El Kaddouri reduced the deficit shortly after the break to give their side hope.