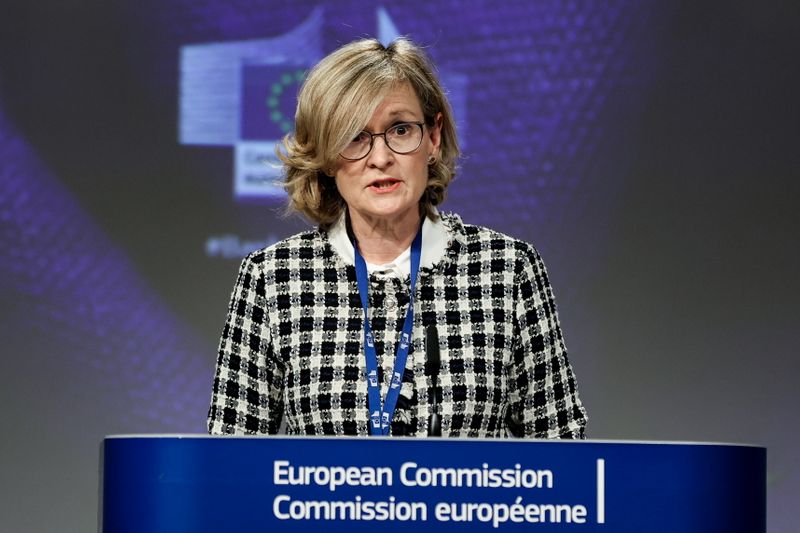 LONDON (Reuters) – The European Union will meet an end-of-March deadline for agreeing a cooperation pact with Britain in financial services despite the clash between the UK and the bloc over Northern Ireland, the EU’s financial services chief said on Tuesday.

Mairead McGuinness said she was “sticking to our commitment” to set up the cooperation framework, described by Brussels as an informal mechanism for discussing upcoming regulatory issues, similar to what the bloc already has with the United States.

“We are committed to set it up by March, and I am confident that, thanks to the good work of the teams, we will meet this deadline,” McGuinness told a meeting of EU finance ministers.

“We then need to go through the formal approval procedures.”

Britain fully left the EU’s orbit on Dec. 31 and its financial sector is now largely cut off from what had been its biggest export customer.

Direct market access for banks and insurers in London to the EU is being dealt with separately by Brussels under its “equivalence” system.

“Of course, such cooperation will not constrain the EU’s unilateral equivalence or regulatory process,” McGuinness said.

“I expect that we will continue to show a united front towards the UK, and do not lend space to any attempt to divide us, or to create space for arbitrage,” she said.

The bloc has sent a letter of formal notice to kick-start an “infringement procedure”, which could lead to fines being imposed by the EU’s top court, although that could be at least a year off, leaving time for a solution to be found.