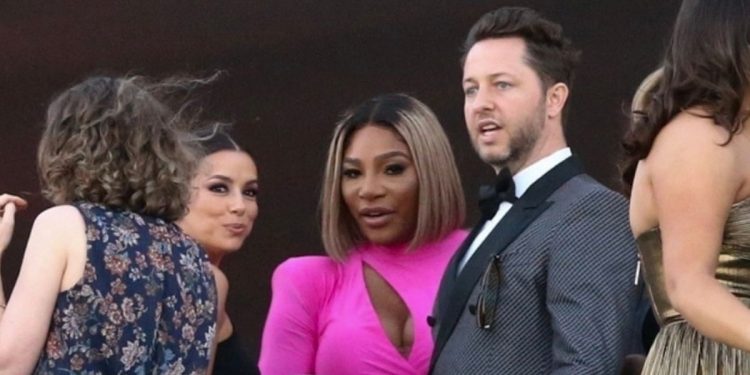 
Eva Longoria and Serena Williams were spotted sharing a joke as they mingled at Brooklyn Beckham’s star-studded wedding.

The Desperate Housewives actress and tennis legend have been good pals for years.

They are often spotted at events together and are both friends with Brooklyn’s mum Victoria Beckham.

It looked like they were having a good time at the nuptials as Eva pulled a series of playful faces as she enjoyed a drink on the balcony with Serena.

Eva, 47, was dressed to kill in a black low cut gown, designed by none other than her bestie Victoria.

While Serena, 40, opted for a hot pink dress which had a slit across the thigh and the top.

Other celebrity guests in attendance at the ‘wedding of the decade’ were Gordon Ramsay and his family, who are all close friends of the Beckhams.

There was a mini Spice Girl reunion as Mel B and Mel C turned up to support Posh on Brooklyn’s big day.

Emma Bunton sent her apologies she couldn’t make it, but wished Brooklyn and his bride Nicola Peltz good luck on their big day.

Sharing a selfie with the bride and groom, Emma posted on Instagram : “These two beautiful souls are getting married today! I’m so sorry I couldn’t make it there to celebrate you both.”

She signed off the post with: “We Love you all very much @victoriabeckham @davidbeckham try not to cry too much #happytears.”

Geri was another no show due to her being in Australia to support her husband Christian Horner at the Grand Prix.

Another celebrity guest who had to bail on the big day was Brooklyn’s godfather Sir Elton John.

Elton has been friends with Victoria for three decades and famously made a cameo in the 1997 Spice World movie.

They are so close that the Beckham kids refer to the Rocket Man singer as ‘Uncle Elton’ – with David once jokingly warning ‘watch out uncle’ while sharing a video of son Cruz’s impressive piano playing skills.

But due to his rescheduled tour dates, Elton was unable to get to Miami to attend the wedding.

Brooklyn and Nicola, a US actress and billionaire heiress, said ‘I do’ on Saturday in a £3 million wedding in Palm Beach.

Brooklyn’s brothers Romeo, 19, and Cruz, 17, were best men while his little sister Harper, 10, was a bridesmaid .

Although pictures of the bride and groom have been kept firmly under wraps, we know Nicola wore a stunning Valentino gown .

After saying their vows, Brooklyn planted a lingering six second kiss on his new wife’s lips confirming their union.

Although the Beckhams are worth £380 million, the entire day was paid for by Nicola’s parents, Nelson and Claudia Peltz, who have a net worth of £1.3 billion.

There was not one, but two weddings on the day – with Nicola honouring both her parent’s religions with a Catholic and a Jewish ceremony.

Polo G Has All Charges Dropped From 2021 Miami Arrest