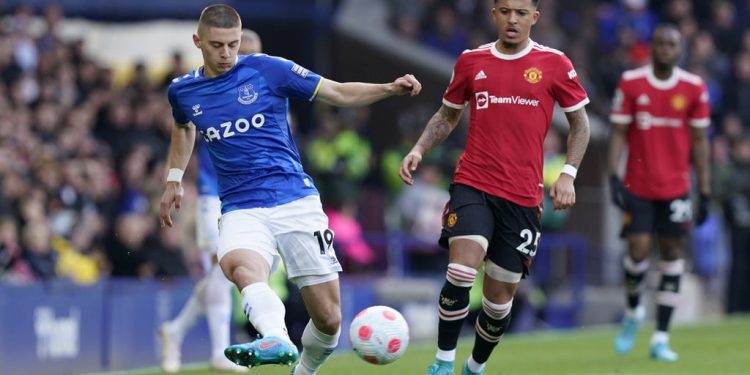 Everton are taking on Manchester United today in a crucial match at both ends of the Premier League table.

Frank Lampard’s Everton are in dire straits after losing to relegation rivals Burnley in midweek and are now only one point above the Clarets and the drop zone. They now embark on a tough run of fixtures and will need every ounce of home support to overcome United at Goodison and get their survival bid back on track.

United come into the game still clinging on to faint hope of finishing in the top four after Arsenal were stunned by Crystal Palace at the start of the week. United are seventh, however, three points behind both north London clubs have played the same number of games as Spurs and one more than Arsenal, and they require consistent run of results to get themselves back into the mix.

Follow all the latest updates from Everton vs Manchester United below:

30 mins: Everton have taken all the momentum with them since the goal and have won a couple of free kicks in dangerous areas. Michael Keane’s effort from the first set piece goes over the crossbar before the combined efforts of Harry Maguire and Bruno Fernandes clear the second.

27 mins: Everton have the lead! Fred gives the ball away to Anthony Gordon who threads a fine pass out to the left wing to play Richarlison into space. He curls the ball into the box where Alex Iwobi lays it off back to Gordon. He runs onto a first time shot that strikes Harry Maguire, wrongfoots David De Gea and nestles in the back of the net!

23 mins: Everton have looked keen to keep hold of possession but they still haven’t challenged Man Utd defensively yet.

Man Utd look to put a fine attack together with some short, quick passes across the back line up to Sancho on the left side of the pitch. He give it to Fernandes who knocks the ball inside to Fred. He’s closed down quickly by Delph who wins the ball with a sliding tackle and gets a round of applause from the Everton fans.

20 mins: Richarlison has been on the end of a couple of heavy challenges, first from Lindelof and the Wan-Bissaka. Everton win a free kick after the second tackle and the Man Utd right-back avoids a yellow card which the home fans aren’t happy about.

Pickford fires the set piece over to the right wing but Alex Telles gets up highest and clears the danger for Man Utd.

17 mins: Pickford’s having a good day, he looks confident and those two early saves will stand him in good stead. Man Utd move the ball around Everton’s final third looking for an opening in the defence. Alex Telles whips a cross in from the left wing that drops over the head of Cristiano Ronaldo and has to be dealt with by Vitalii Mykolenko. He heads the ball towards the byline under pressure from Jadon Sancho but Pickford sprints across and plucks it out of the air to avoid a corner.

14 mins: Save! Man Utd are really bringing the heat now. Bruno Fernandes receives the ball on the left side and sends an inswinging cross into the middle of the box. Marcus Rashford makes his way in between the two Everton centre-backs and wins the ball in the air. There’s enough pace on the cross that Rashford can guide it towards goal with a glancing touch but Jordan Pickford denies him again with a sharp save low to his right!

12 mins: Everton fail to properly deal with the resultant Man Utd corner as once again the headed clearance comes to a United player on the edge of the box. This time it’s Fred who dinks the ball back into the area for Cristiano Ronaldo. He lets it run across his body before whipping a shot wide of the near post.

9 mins: Save! Man Utd win a free kick just outside the box on the inside left. It’s worked nicely as Bruno Fernandes chips it over to the far post where Victor Lindelof heads it back into the middle. Fabian Delph’s headed clearance only comes out as far as Marcus Rashford who brings the ball down and drills one at goal. It’s well struck but Jordan Pickford leaps to his right and parries the ball wide of the post!

6 mins: Alex Telles collects a pass from Nemanja Matic and brings the ball down the left wing. He plays a nice one-two with Marcus Rashford to carry it alongside the box where Allan forces him to the byline. Telles finally squeezes a cross into the middle but the assistant referee flags that the ball first ran out of play.

3 mins: There’s been a few early mistakes from Man Utd with miscontrolled touches and wayward passes as they attempt to find their feet in the game. These opening stages have seen Everton control possession but they are yet to challenge the visitor’s back line.