Everything to Know About James ‘Jimmy V’ Valvano 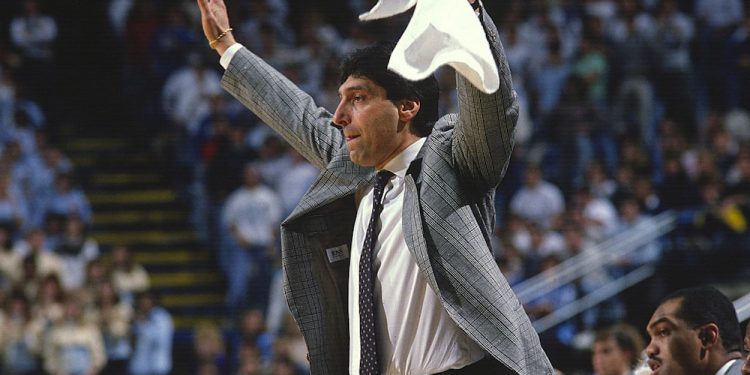 
In the world of sports, certain names transcend the wins and losses and speak to something more significant. James Valvano, more commonly known as Jimmy V, was one of those. While the college basketball coach found plenty of on-court success, he’s remembered for something more important: his courageous fight against cancer and unwillingness to ever give up.

Not everyone saw Valvano coach NC State to a championship, though. Some of us haven’t heard his iconic ESPYs speech. With that in mind, here’s a rundown of everything you need to know about Jimmy V.

Who was Jimmy V?

The man who became known to basketball fans around the country as Jimmy V was born James Valvano in Queens, New York. He played college basketball at Rutgers, even helping the Scarlett Knights find some NIT Tournaments success (back when the NIT still mattered), and, after graduation, moved into coaching.

After getting his start at John Hopkins, Valvano moved to Bucknell. He’d later coach at Iona before stepping up to the big time at NC State. There, he proved his coaching chops and led the Wolfpack to the 1983 NCAA title.

Jimmy V’s story, however, then became about something bigger than basketball. In 1992, the coach was diagnosed with cancer (metastatic adenocarcinoma, to be exact). As he battled the disease, he preached the importance of refusing to give up and, shortly before his death in 1993, announced the creation of The V Foundation for Cancer Research.

Was Jimmy V a good coach?

While his legacy has transcended sports, Valvano was a pretty solid coach. During 19 seasons on the NCAA sidelines, he compilied a 209-110 record, which is even more impressive when you consider that he never coached a truly blue-blooded program.

Beyond the record, Jimmy V led NC State to a famous championship, two ACC Tournament crowns, and two ACC regular-season titles. On an individual level, he also earned ACC Coach of the Year honors in 1989.

What was Jimmy V’s famous speech about?

For all of his other accomplishments, James Valvano is most remembered for an iconic speech he gave at the 1993 ESPY Awards. The coach was given the Arthur Ashe Courage Award and, despite being ravaged by cancer, took the stage and spoke from the heart.

While it’s tough to do his words justice (you should really watch the video embedded above), Jimmy V spoke about living life fully. He spoke about the importance of cancer research and created a foundation to do just that. He pledged that, despite anything that happened to his body, his mind, heart, and soul would remain intact.

Beyond that, he spoke from the heart. The coach brushed off his time limit, saying that, in his state, he wasn’t concerned about “some guy in the back going, ’30 seconds.’” He told a humorous story about his first locker room speech. He implored the audience to laugh, cry, and think.

At the risk of being cliche, that speech told the world everything they needed to know about who Jimmy V was.

When did Jimmy V die?

While his full head of hair and unflinching positivity camouflaged the true scale of his illness, Valvano’s cancer was quite serious. He died on April 28, 1993. That was less than two months after giving his now-legendary speech and less than a year after his diagnosis.

Jimmy V was 47 years old when he died.

Jimmy V’s legacy lives on today through the V Foundation

As this post has (hopefully) demonstrated, there were a few different versions of Jimmy V that sports fans came to know over the years. There was the passionate coach, frantically sprinting around the floor, looking for someone to hug. There was the media personality, sitting alongside Dick Vitale and appearing on late-night talk shows. Then, there was the Valvano who gave the ESPYs speech and, despite his physical pain, seemed stronger than ever.

In 1993, James Valvano told the audience that the foundation’s motto was “Don’t give up … don’t ever give up,” which came from a speech that he gave at NC State a couple of weeks earlier. While that was nearly 30 years ago, they’re more than living up to those words today.

RELATED: Jay Bilas Ranks the Top 5 Players He Faced at Duke, and No. 1 Isn’t Michael Jordan