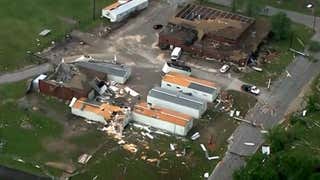 Major damage is being seen after tornadoes roared through parts of central Oklahoma and Texas Wednesday.

A sheriff’s department employee in Wilbarger County, Texas, told weather.com in a phone call Wednesday night that there was “extensive structural damage” in the town of Lockett, on the Oklahoma border about 50 miles northwest of Wichita Falls.

Deputies were on the scene as of about 9:40 p.m. CT. No further information was available.

(FORECAST: Severe Thunderstorms, Including Tornadoes, to Hit Plains, Midwest, South Into the Weekend)

Earlier, buildings were ripped apart and streets littered with debris after a tornado touched down in Seminole, Oklahoma, about 50 miles southeast of Oklahoma City.

State troopers were among the many agencies assisting in the response there.

“They’re going from place to place making sure that no one else is in need of help,” Trooper Eric Foster told KWTV.

“It’s not one big metropolis there. There are homes across the countryside.”

First responders and residents in the area had to take cover again as more storms moved through after the initial tornado.

Video and photos shared to social media and aired by local tv stations showed menacing clouds, blown-out windows and other damage in Seminole.

A broad circulation moved through the region along a warm front and produced multiple tornadoes.

Seminole Public Schools announced they will be closed Thursday, according to KWTV.

The Academy of Seminole, a public charter school, took a direct hit from the tornado, according to a Facebook post from the school.

“We will be (assessing) the damage over the next few days,” the post read. “Please do not come to the school: it is extremely dangerous. Everyone who was at the school is safe.”

About 14,000 power outages were being reported in Oklahoma as of about 9:45 p.m. CT, according to PowerOutage.us. Most were in Seminole County and neighboring Hughes County.

The town of Seminole has a population of about 7,200, while about 23,500 people live in the county as a whole.

The storms Wednesday night came amid severe weather across Oklahoma and Texas.

Hail larger than 2 inches was reported Wednesday afternoon in southwest Oklahoma. Hail also fell in parts of the Texas Panhandle and Kansas.

A tornado was reported shortly before 6 p.m. CT in Dickens County in the Texas Panhandle, about 50 miles east of Lubbock. That tornado tracked east to south of Paducah, Texas.

And a tornado near Crowell in Foard County, Texas, was seen on video crossing a highway.

Earlier in Kansas, at least three people were injured by separate lightning strikes in the Wichita area, local media outlets reported. One was an airman on the flight line at McConnell Air Force Base who was conscious but transported a local hospital, according to a news release.

Severe weather is expected to continue into the weekend for parts of the Plains, Midwest and South.

Anyone in the potential path of storms should have a severe weather plan, including where to take shelter, and multiple ways of receiving National Weather Service watches and warnings via smartphone wireless emergency alerts, The Weather Channel app and NOAA weather radio.

The Weather Company’s primary journalistic mission is to report on breaking weather news, the environment and the importance of science to our lives. This story does not necessarily represent the position of our parent company, IBM.

Russia intensifies attacks on railways, taking aim at Ukraines lifeline to the outside world – CNN

Russia intensifies attacks on railways, taking aim at Ukraines lifeline to the outside world - CNN