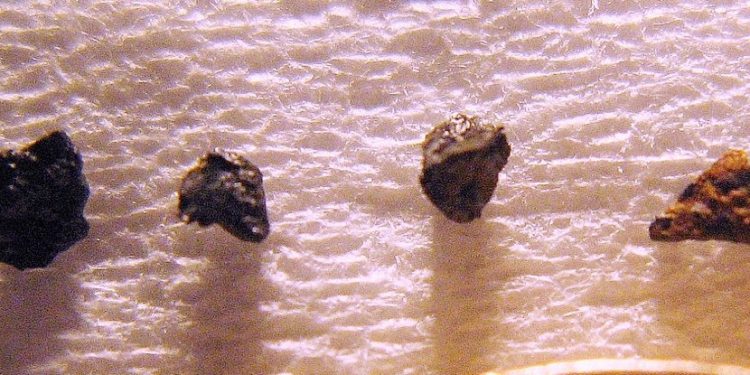 ‘Standard candle’ (or type Ia) supernova explosions are some of the most energetic events in the Universe, happening when a dense white dwarf star subsumes another star. Now, scientists think they’re found the first evidence on Earth of such a supernova.

The claim comes after a careful study of the extraterrestrial Hypatia stone that was found in Egypt in 1996. Tell-tale signs, including the chemical makeup and patterning of the rock, suggest that the shards contain bits of the dust and gas cloud surrounding an Ia supernova.

Over billions of years, that mix of dust and gas would have turned into a solid, the researchers say, eventually forming the parent body that Hypatia came from sometime close to when our Solar System first came into being.

A 3-gram sample of the Hypatia stone. (Romano Serra)

“In a sense, we could say, we have caught a supernova Ia explosion in the act, because the gas atoms from the explosion were caught in the surrounding dust cloud, which eventually formed Hypatia’s parent body,” says geochemist Jan Kramers from the University of Johannesburg in South Africa.

Using detailed, non-destructive chemical analysis techniques, the team looked at 17 different targets on a tiny sample of Hypatia. From there it was a question of piecing together clues about where the stone had been and how it had formed.

Those clues included an unusually low level of silicon, chromium, and manganese, suggesting that the rock hadn’t been formed in the inner Solar System. The researchers also noticed high levels of iron, sulfur, phosphorus, copper, and vanadium, again making the object distinct from anything in our particular neighborhood in space.

Looking at element concentration patterns of Hypatia, there were marked differences to what we would expect to have formed in rocks from inside the Solar System and in our arm of the Milky Way. Further analysis rules out the idea that the rock had formed from a red giant star.

The researchers were also able to show that Hypatia didn’t match what would be expected if it came from a type II supernova – it has too much iron relative to silicon and calcium – and that leaves the intriguing possibility that this is a leftover from a type Ia supernova, and the first to be found on this planet.

“If this hypothesis is correct, the Hypatia stone would be the first tangible evidence on Earth of a supernova type Ia explosion,” says Kramers.

“Perhaps equally important, it shows that an individual anomalous parcel of dust from outer space could actually be incorporated in the solar nebula that our Solar System was formed from, without being fully mixed in.”

From what we know of type Ia supernovas, they should produce very unusual element concentration patterns in rocks such as Hypatia. Through a comprehensive search of star data and modeling, the team wasn’t able to find a better match for the rock.

Of the 15 elements analyzed in the stone, several matched what would be expected if the object had come from a dense white dwarf star explosion.

However, it’s not a closed case yet. A further six elements don’t match type 1a supernova models: aluminum, phosphorus, chlorine, potassium, copper, and zinc. However, the researchers think something further back in the supernova’s past could explain this.

“Since a white dwarf star is formed from a dying red giant, Hypatia could have inherited these element proportions for the six elements from a red giant star,” says Kramers. “This phenomenon has been observed in white dwarf stars in other research.”

We’ll need more research to settle the science, but at this point, it certainly looks like this mysterious rock has traveled a very long way.

The research has been published in Icarus.