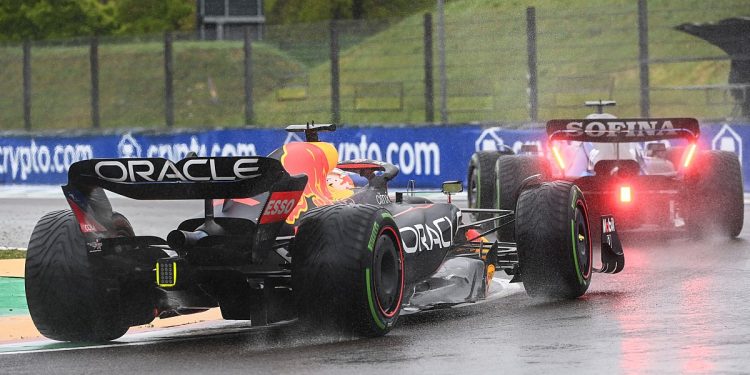 Verstappen will start the sprint qualifying race ahead of Ferrari’s Charles Leclerc and McLaren’s Lando Norris – who was one of many drivers to go off – following the one-hour qualifying session, which was halted on multiple occasions.

The result of Saturday’s sprint race sets the grid for Sunday’s main event. The winner of the sprint will be awarded with the event’s pole position accolade.

What happened in Q1?

The session began on a slightly damp but quickly drying track. A red flag was required after 12 minutes for Alex Albon’s Williams when its right-rear brake overheated and caught fire, causing the tyre to explode as he toured back to the pits.

Times tumbled throughout the session, with Sainz taking P1 with seven minutes to go with a lap of 1m20.319s, 0.03s ahead of Verstappen. Leclerc took control with four minutes remaining with 1m19.545s, 0.015s faster than Sainz.

In the battle to make it through to Q2, Lewis Hamilton only made it through by just 0.004s. Falling at the first hurdle were the AlphaTauris of Yuki Tsunoda and Pierre Gasly, Alpine’s Esteban Ocon (who had a suspected gearbox problem) and the Williamses of Nicholas Latifi (who spun) and Albon.

What happened in Q2?

More rain was threatening at the start of the session, sending the remaining cars out on track immediately.

Sainz set the initial pace at 1m18.990s but that was quickly beaten by Verstappen on 1m18.793s. A second red flag was soon required when Sainz put his Ferrari into the tyres at Rivazza. Lando Norris was third fastest for McLaren, ahead of Sergio Perez (Red Bull) and Leclerc.

Rain fell during the break, meaning there would be no further improvements. Knocked out at this point were George Russell (Mercedes), Mick Schumacher (Haas), Hamilton, Guanyu Zhou (Alfa Romeo) and Lance Stroll (Aston Martin) – who didn’t get a representative lap time in before the stoppage.

What happened in Q3?

The first runs, with all cars using intermediate tyres, were halted when Kevin Magnussen spun his Haas at Acqua Minerale. Meanwhile, Verstappen had a brief grassy moment on his out lap.

Verstappen then grabbed the top spot with 1m27.999s, 0.779s faster than Leclerc, despite being forced to lift off for Valtteri Bottas stopping in the final sector ahead of him, which caused another red flag. Verstappen went off into the gravel on his next lap, just as the red flag came out.

The session resumed with three minutes to go, but more rain had fallen while Bottas’s car was recovered.

Thus Verstappen and Leclerc will line up on the front row, ahead of Norris (who went off at Acqua Minerale to halt qualifying yet again) and Magnussen.