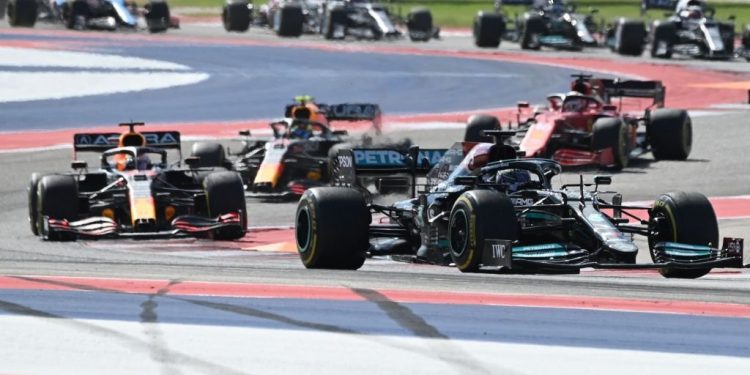 
F1 is set to return to Las Vegas in 2023 as a third race in the United States, but memorably, it will not be the first dalliance in Sin City – where the world title was once decided in a hotel car park.

At last, Formula 1 appears to have finally cracked the American market it has craved for so long.

The series has seen a surge in popularity in the United States since Liberty Media took over in 2017 – with Netflix show Drive to Survive the biggest reason behind the sky-high numbers.

At the 2021 United States Grand Prix in Austin, some 400,000 fans turned out across the weekend as Max Verstappen and Lewis Hamilton’s title fight hotted up in the closing rounds.

Such is the boost, that F1 will be racing for a second time in the US in 2022, as Miami joins the calendar in May – with Austin (below) still in the fall.

However, F1 is set to announce a deal to once again race in Las Vegas – starting in 2023 to have three grands prix stateside.

The first time that F1 raced in Las Vegas was 1981 – a race memorable for fainting drivers, one throwing away the world title, and derision, all of which took place in a hotel car park…

The 2023 grand prix in Las Vegas is set for a primetime slot over Thanksgiving weekend in November of next year.

It will take on parts of the famed Las Vegas strip – and a night, street race – similar to what we currently have in Saudi Arabia.

This new F1 track in Las Vegas will be a far cry away from the time in 1981 and 1982 when the series first headed to Nevada.

For some reason, think those green paper things with $ printed on them, the grand prix was run in the car park of Caesars Palace.

A 14 turn course, it weaved around the car park, with Turns 2 to 10 in a twisty in-field section before Turn 11 saw the cars pick up speed.

The only trouble was, it was an anti-clockwise circuit, which placed great strain on the neck of the drivers – more accustomed to clockwise ones.

Throw in the fact that the track was as smooth as glass, 75 degree Fahrenheit (24C), heat, it was a recipe for an unpleasant day in the office.

The world title was decided in a hotel car park – twice

Heading into the race – the season-finale, Williams driver Carlos Reutemann (below) and Brabham’s Nelson Piquet were the two main remaining contenders for the title.

There was a third in Jacques Laffite, but his hopes were slim thanks to a points disadvantage.

Argentine Reutemann led on 49 points, Piquet 48 and Laffite on 43.

Laffite would start 12th and finish sixth – ending on 44 points and well out of contention.

Reutemann made a sluggish start and, although allowing for gearbox problems, finishing a lowly eighth, one lap down.

Piquet battled through the heat and exhaustion – only needing fifth place to leapfrog Reutemann.

Brazilian Piquet was so exhausted after the effort required that he needed to be lifted from his car as he was so weak.

Highlights of the race can be viewed here.

In that 1982, the title was also decided in the final race – albeit in less dramatic circumstances.

Keke Rosberg – father of Nico (both below) only needed to finish in the points to claim victory.

He duly landed fifth place to be the first Finn to become F1 world champion.

In this second F1 race in Las Vegas, the inital buzz had worn off.

F1 promptly abandoned the car park of Caesars Palace – turning it back over to the hotel.

The series has raced on some wild tracks in its 72 year history – the Nurburgring, AVUS, and Pescara (nearly 16 miles long).

But perhaps none were as unusual or as out of place as the Caesars Palace car park.