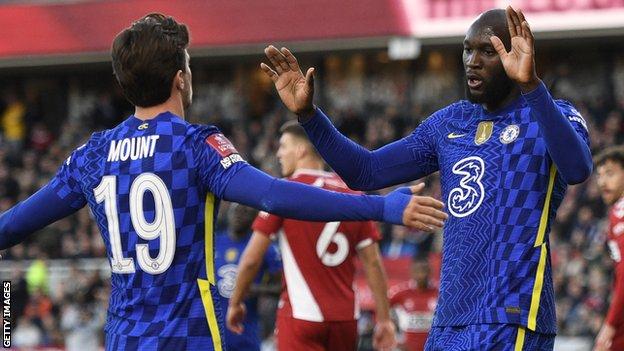 
Chelsea can now expect to have full support at their FA Cup semi-final against Crystal Palace at Wembley.

The Football Association (FA) says there have been talks with the government on amendments to the club’s operating licence.

It would allow tickets to be sold as normal for the game, which is due to be played on the weekend of 16-17 April.

Chelsea are currently banned from selling new tickets due to sanctions against Russian owner Roman Abramovich.

The 55-year-old’s assets were frozen by the government on 10 March because of his alleged strong ties to Russian president Vladimir Putin. Abramovich has denied having these links.

Abramovich put the club up for sale on 2 March, five days after Russia invaded Ukraine.

The club were unable to sell their entire 4,500 ticket allocation for Saturday’s FA Cup quarter-final at Middlesbrough and it meant they were backed by around 700 supporters who had got their tickets before the sanctions were imposed.

But an FA spokesperson said English football’s governing body hopes to have sell-out crowds at both semi-finals.

“This includes tickets for Chelsea supporters for their match against Crystal Palace,” the spokesperson added. “We are working with the government on a method to achieve this whilst respecting the sanctions that are currently in place on Chelsea.”

Earlier, Julian Knight, the chair of the Digital, Culture, Media and Sport committee, called for changes to the special licence imposed on the Stamford Bridge club.

“Chelsea is more than just its owner, it’s a living organism with huge importance to its fans and community,” Knight said.

“It was understandable that, at short notice, last week’s game against Middlesbrough went ahead without Chelsea fans.

“But with this much notice, the FA have no excuse for excluding them. The FA must be allowed to sell tickets to Chelsea fans so long as all money goes to the people of Ukraine.”

Fans call for Man City-Liverpool match to be moved

Meanwhile, the other semi-final between Manchester City and Liverpool is still set to go ahead at Wembley despite no trains running from either city to or from London from 15 to 18 April because of engineering works between Euston and Milton Keynes.

The FA says it is liaising with both clubs and working with Network Rail and National Express to find a solution “so that supporters of both teams are able to travel to and from the fixture with as minimal disruption as possible”.

Malcolm Clarke, chair of the Football Supporters’ Association, has criticised the timing of the works.

“While fans appreciate the need for work on the railways, it would make sense to avoid the FA Cup semi-final weekend given the numbers travelling,” he said.

In a joint statement, fans’ groups Spirit of Shankly from Liverpool and City’s 1894 Group said: “For the other semi-final between Chelsea and Crystal Palace, Wembley makes sense. For Liverpool and City it makes no sense.

“We are asking both clubs, the FA and Wembley to reconsider where this game is played and, for once, to put the fans at the forefront of their thinking.

“City and Liverpool are less than 40 miles apart and there are plenty of grounds big enough, far closer than Wembley, to stage such a prestigious game.

“We urge those in charge to think again and move the venue.”