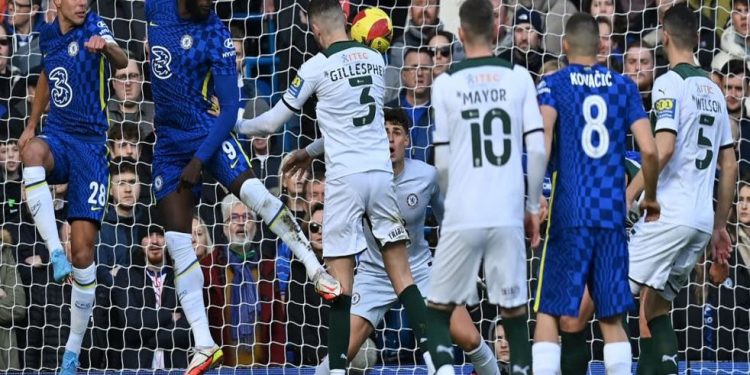 
It promises to be a wonderful weekend of FA Cup football with a number of fascinating fourth round ties.

The lunchtime kick-offs see European champions Chelsea host League One outfit Plymouth Argyle, as well as non-league Kidderminster entertaining the Premier League’s West Ham. Kiddy can be seen most weekends in the sixth-tier National League North and were forced to start this season’s competition in the second qualifying round stage, meaning Russell Penn’s side have had to negotiate six matches to reach this stage.

Steven Schumacher’s Pilgrims travel to Stamford Bridge after upsetting Birmingham in the third round, while Thomas Tuchel’s Blues will hope to make it third time lucky in the cup after being upset in back-to-back finals to Arsenal and Leicester, despite rebounding to lift their second European Cup days later. Chesterfield were thrashed last time out at the Bridge, underlining the task that Plymouth face this afternoon.

“It’s a bit daunting to be honest,” Schumacher told BBC Sport. “I’m under no illusions that it’s going to be a difficult afternoon, but I just want to embrace it and enjoy it as best as possible. I was in St George’s Park on my pro licence and immediately went ‘yes’ when we got Chelsea away and then thought ‘oh my God, we’re going up against the European champions away from home’. You’ve got to try and enjoy it, put a plan together for your team and go there and give it your all.”

Follow live minute-by-minute updates from both cup ties, plus build-up, team news, analysis and reaction below:

15 mins: Panutche Camara comes close to adding a second for Plymouth Argyle as he drills a low shot towards the far bottom corner only for Malang Sarr to block the effort on the line. Chelsea need to wrestle back the momentum at Stamford Bridge.

12 mins: Issa Diop leans on Amari Morgan-Smith and gives Kidderminster a free kick on the halfway line. The home side fire the ball up the pitch but Omari Sterling is kicking into the wind and the ball doesn’t reach the penalty area. The Kidderminster fans are loving what they’re seeing here. Their team are holding their own against West Ham.

7 mins: Well then! With their first attack League One’s Plymouth lead against Chelsea.

The goal comes from a free-kick that’s swung into the penalty from the left side. Defender Macaulay Gillesphey squeezes in front of his marker Romelu Lukaku and flicks a header into the far corner of the net.

9 mins: Chance! Kidderminster have the first opportunity on goal in this game. Luke Simpson fires the ball up the pitch and a series of headers see the ball bouncing around just outside West Ham’s penalty area. It eventually drops nicely for Sam Austin who drills a half-volley towards goal and forces Alphonse Areola into a sharp save to his right.

5 mins: Over at Stamford Bridge Chelsea have dominated the opening stages creating three chances in front of goal inside the opening five minutes or so. Jorginho came close with a snapshot and Hakim Ziyech curled an effort straight at Plymouth goalkeeper Michael Cooper.

6 mins: Andriy Yarmolenko brings the ball down the right wing and takes on Richards. He dinks it past the left-back and sends Benrahma into the box. He’s quickly closed down but manages to offload the ball to Ryan Fredericks who whips in a cross that Kidderminster deal with well.

3 mins: It’s been a scrappy start to the game as both teams attempt to keep hold of the ball in midfield. Kidderminster’s midfielders are throwing themselves into strong tackles with West Ham trying to find a bit of early rhythm. Said Benrahma attempts to slot Jarrod Bowen in on the right side but Caleb Richards is there to intercept.

Kick off: West Ham get the ball rolling and send it long down the right side. The wind takes the ball and forces it straight out of play for a Kidderminster goal kick.

The teams make their way out onto the pitch. There’s a fine atmosphere at Aggborough, they Kidderminster players are up for this one today.

FA Cup fourth round: Counting down to kick off

Almost time for kick off at the Aggborough Stadium. Can National League side Kidderminster shock the Premier League’s West Ham?

The Championship’s Middlesbrough knocked Manchester United out of the competition yesterday so we’ve already had an upset, how many more are on the cards today?