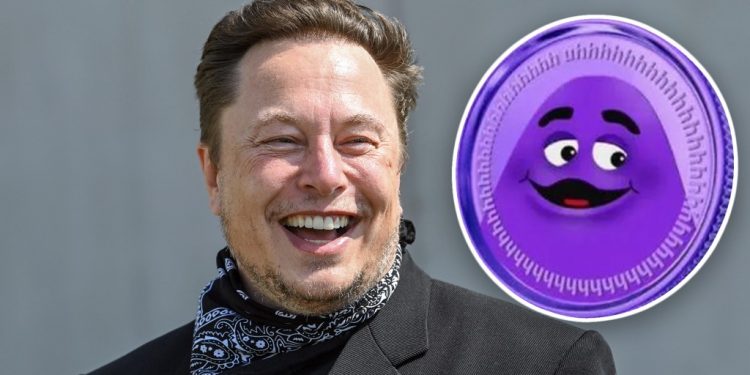 
The value of fake cryptocurrency Grimacecoin has rocketed by as much as 285,000% in a matter of hours in response to a McDonald’s joke tweet about Tesla.

The joke crypto, referencing their purple mascot shaped like a tastebud, parodied an earlier request by Elon Musk during a light-hearted Twitter exchange.

The Tesla founder tweeted on Tuesday that he would “eat a happy meal on TV” if McDonald’s accepted Dogecoin as a payment.

And on Wednesday the fast-food company responded with a picture of their popular mascot with the caption: “Only if Tesla accepts grimacecoin.”

Just hours later, the tweet had spurred the creation of nearly 10 grimacecoins on the Binance Smart Chain (BSC) network alone.

One such token started trading at $0.0007 as it reached $2 at its peak, according to CoinDesk.

The market had already been rocked by the Twitter exchange after Musk’s tweets had sparked an increase in Dogecoin yesterday — which had soared by 8% at its peak, according to CoinMarketCap.

His comment came after McDonald’s first tweeted on Monday: “How are you doing people who run crypto Twitter accounts?”

Dogecoin, which was initially started as a joke in 2013, is currently in the top 10 by market value for cryptocurrencies.

Its value tends to fluctuate based on what Musk says about it.

It’s one of several reasons why cryptocurrencies are high-risk investments, so it’s important to only invest what you can afford to lose if anything.

Some products and cryptocurrency services can be very complex, and you should only put cash into things you understand.

Also, keep in mind that cryptocurrency firms aren’t regulated like other financial companies.

This means that you won’t have any protection if and when things go wrong.

This sent the crypto soaring by 18%.

It’s almost impossible to predict whether Dogecoin’s price will fall or rise this year as cryptocurrencies are so volatile.

The market is unpredictable as it is affected by a number of factors, including regulatory crackdowns and comments by high-profile individuals.

Sarah Coles, a personal finance analyst at investment firm Hargreaves Lansdown, previously told The Sun: “Forecasting what’s going to happen next to meme coins is like predicting what’s likely to set off the next tantrum in a room full of toddlers.

“Because it has no underlying value, it’s not generally used for transactions, and is a terrible store of value, the price is driven by highly unpredictable sentiment.

“So while people may point to patterns in the past and make guesses as to whether they will happen again, in reality, it’s impossible to say with any degree of certainty.

“As with those toddlers, any one of them could kick off at any time.”

But that doesn’t stop some crypto fans from forecasting what they think will happen to Dogecoin’s price.

Wallet Investor predicts that Dogecoin will hit $0.330 in the next year.

Meanwhile, Digital Coin Price is a little less bullish predicting that the price will reach just $0.1945 in 2022.

But keep in mind, price predictions could change should more bullish or bearish trends occur.

The Financial Conduct Authority (FCA) has warned people about the risks of investing in cryptocurrencies.