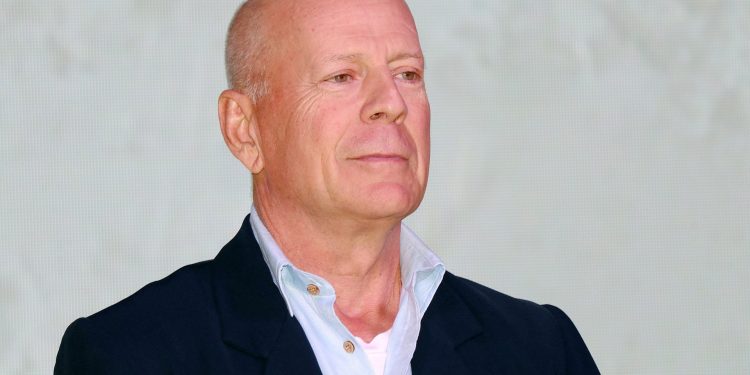 
Actor Bruce Willis is leaving the Hollywood scene and retiring from acting after being diagnosed with aphasia. After news of his condition broke, fans were concerned Bruce Willis suffered a stroke. His family updated followers of his retirement from acting.

The news of Willis, who just recently celebrated his 67th birthday on March 19, was given in an update by his family who said his retirement was down to the brain disorder.

Today, Bruce Willis’ family took to Instagram to tell fans that the actor wouldn’t be starring in anymore films due to the condition.

In a statement Willis’ family shared, it was announced he would be officially retiring from acting to focus on his health.

His wife, Emma Heming was the first one to share the news to her 176k Instagram followers. Additionally, ex-partner Demi Moore and her three children who also shared the same post moments after.

“To Bruce’s amazing supporters, as a family we wanted to share that our beloved Bruce has been experiencing some health issues and has recently been diagnosed with aphasia, which is impacting his cognitive abilities,” the caption reads.

“As a result of this and with much consideration Bruce is stepping away from the career that has meant so much to him.”

As the news sounded that his retirement would be permanent, fans of the actor were left heartbroken as they were sending the star well-wishes.

What is aphasia? Aphasia is a language disorder that affects how a person communicates with others, writes Hopkins medicine. There are three types of the condition, including Broca’s aphasia, global aphasia and Wernicke’s aphasia. All three types interfere with a person’s ability to speak and/or understand language.

The disorder is caused by damage in a particular area of the brain that controls comprehension and language expression.

Many people who are diagnosed with aphasia suffer a stroke beforehand, although not every single person with the illness has had one.

The damage caused to the brain results in a blockage or rupture of a blood vessel in the brain, which is why a common cause can be a stroke.

A person with aphasia may still be able to speak but not convey all words in a sentence, and in some cases might be able to understand the speech of others fairly well. Each patient’s condition will differ from the next person, and on what type of aphasia they have.

After hearing the news of the Die Hard actor, fans have been concerned that Bruce Willis suffered a stroke. His family have not revealed the cause of his condition or detailed when he began to develop symptoms or when he was diagnosed.

What causes aphasia? Is the illness permanent?

According to the Independent, another cause of aphasia could also be a head injury. Nonetheless, the damage caused may see patients never regain their full speech and language skills.

The condition is usually treated as soon as possible to prevent further damage. The recovery process is vital as it helps a person rebuild or learn a new way of communication.

Speech and language therapy are common recovery programmes to help those diagnosed with the condition.

Bruce Willis has had a remarkable career in the Hollywood scene and his reputation and movie roles have often become cult classics.

Born on March 19, 1955, in Germany, Walter Bruce Willis, the American actor gained recognition through his portrayal of John McClane in the Die Hard franchise which ran from 1988 to 2013.

Furthermore, he has also appeared in well-known movies such as The Fifth Element, Monkeys, Bandits, Looper, and Surrogates.

As a two-time Emmy and four-time Golden Globe winner, in 2021 alone, Bruce Willis has a long list of movie credits.

In 2022, Willis has seen two movies already be released – A Day to Die and Gasoline Alley. The star is also credited in appearing in upcoming films such as Vendetta, The Wrong Place, Die Like Lovers and White Elephant.

In other news, Are Hilaria and Alec Baldwin using a surrogate as pair announce seventh child?

Is this the most outrageous tipping request you’ve ever heard? ‘I looked at the sales person with a confused expression’