Fans from around the world flock to ‘bucket list’ Wimbledon final 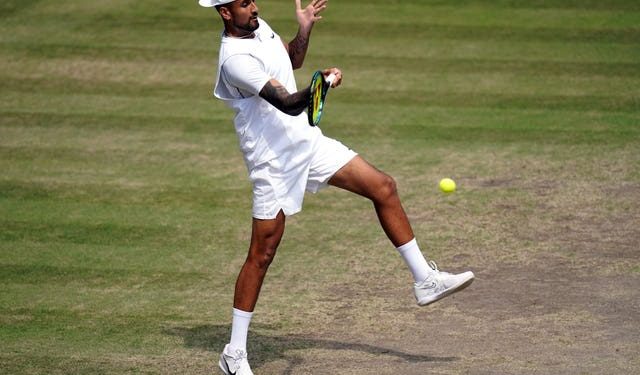 Fans from around the world have flocked to Wimbledon for the “bucket list” moment of watching the men’s final.

Opinion was split among spectators in the queue over who should win after Briton Cameron Norrie was knocked out by Djokovic in the semi-final.

Rowan Moore, 22, from Canary Wharf, told the PA new agency he is rooting for Djokovic, and added: “I’m super-excited it’s the final. I can’t wait.

“I think it’s a British institution – it’s so important to come.”

Adrian Ignatescu, 38, from Romania, is also cheering for Djokovic, and he said Wimbledon has a “great atmosphere”.

He added: “I think it’s a unique event, a special event.”

Chad Toerien, 34, from South Africa, said he is “excited”, adding: “It’s a bit of a bucket list, come all this way, come to Wimbledon, the final, the championship.”

Bridie Hill, 25, joined the queue with her friend Jeremy Franco, 25, both from Sydney, to cheer on Kyrgios.

Ms Hill said: “As Australians, it felt right for us to support Nick.”

Mr Franco said: “We are Nick Kyrgios fans through and through, we love king Kyrgios. He’s from our little part in Sydney so we’re excited.

“Once Nick Kyrgios made the final we were like: ‘we have to go.’”

He added he does not think the Australian will win, but added: “He won’t but we are there for the journey. Go king Kyrgios.

Ms Hill said: “We’ll be the loudest ones in the crowd.”

Irene Nelson and Lesley Ewart, both 66 and from Edinburgh, said they are “so excited” to see both Djokovic and Kyrgios.

Ms Nelson said: “I think it will just be absolute fireworks.”

On who they are rooting for, Ms Nelson added: “It’s really difficult actually. I think probably I’m rooting for Djokovic.”

Ms Ewart said: “I think I might be edging towards Kyrgios actually but sometimes when we’re watching matches our allegiances change.

“We usually root for the underdog.”

Ms Nelson added: “Unless it’s someone we really want, like Cameron Norrie.”

Santiago Castaneda, 27, from Colombia, said the Wimbledon final is one of the reasons he came to London.

He is “super-excited”, adding: “We have never experienced something like this, so glad that we made it.”

He said he is rooting for “underdog” Kyrgios, adding: “He is one of the players who deserve to win a grand slam. He has been playing really well this tournament and I think it’s time for new people.”

After buying tickets, Luke Franklin, 31, from Bristol, said he has watched Wimbledon for years but only ever at home and has “never had the chance to come in person”.

He added he could “already feel the atmosphere” and felt “very lucky” to have secured some of the last tickets available.

Beth Halford, 23, from the Cotswolds, said: “I’m rooting for Djokovic.”

Mr Franklin said: “Yeah I’m Djokovic. I’m tempted to go for an underdog. I like Djokovic, I’ve always liked him so that’s where my heart’s going.”

Daniel Melo, 21, from Brazil, said: “It’s my first time here in London so I was really excited to be here. I am a huge tennis fan, I love to play games so I’m here to do all those things.”

Mr Melo said he will be supporting Kyrgios, “because I’m a big fan of (Rafa) Nadal and he was supposed to be here”.

The Duchess of Cambridge, who is patron of the All England Club, arrived to watch the match from the royal box with the Duke of Cambridge and Prince George.

Kate is expected to present the trophies to both the runner-up and the winner during a Centre Court ceremony after the match.

The final comes with a backdrop of controversy as Kyrgios faces charges of common assault against a former partner in Australia.

His wild journey to the final – featuring run-ins with line judges, umpires, opponents, the media and even the crowd – has prompted headlines such as “A menace to tennis” and “Wimbledon’s worst nightmare”, among others.

However, his opponent Djokovic said he is happy to see Kyrgios in the final after the Australian was given a walkover when Spaniard Nadal pulled out ahead of their semi-final due to injury.

Kyrgios had not been beyond the fourth round at a grand slam for seven years prior to this tournament and has spoken openly about his mental struggles and reluctance to commit fully to the sport.

Serbian Djokovic said of his opponent: “I think, between us players, we always know how dangerous he is, on grass particularly, because of his game, because of his attitude on the court being so confident, just going for it, being a very complete player.”

Kyrgios, meanwhile, said he has developed a “bromance” with the defending champion over the last few months.

The 26-year-old said he thinks a “Kyrgios-Djokovic final would be mouth-watering”.

An Android application checks how roasted coffee beans are

Ceili McCabe’s rise to the top was one unique run

Ceili McCabe's rise to the top was one unique run