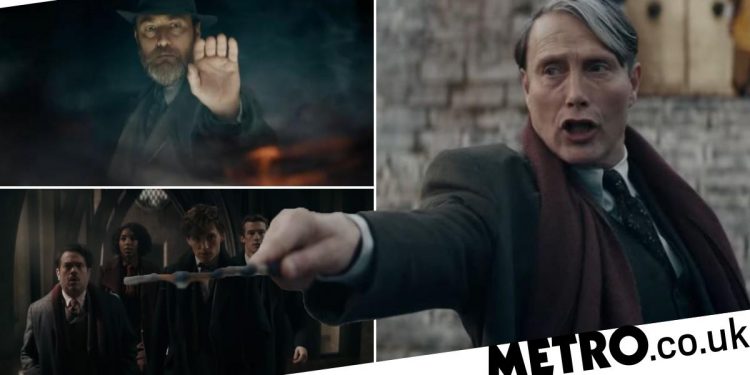 
Fantastic Beasts: The Secrets of Dumbledore is about to hit cinemas – and things are a little different this time around.

The third instalment of the Harry Potter spin-off series, which follows the adventures of Newt Scamander (Eddie Redmayne) has…faced a spot of trouble in the lead-up to its release.

Not only has it faced Covid delays (much like every other production), Johnny Depp departed the movie, with his character Gellert Grindelwald, a pretty huge part of the franchise, having to be recast.

Enter Mads Mikkelsen! The Hannibal actor stepped up to replace Johnny, and is set to see out the final two films as well.

What is the plot of Fantastic Beasts 3?

Fantastic Beasts: The Secrets of Dumbledore catches up with Newt after he joins the fight against the powerful wizard Grindelwald.

Albus Dumbledore (Jude Law) is determined to stop him from seizing control of the Wizarding World but, due to a pact they made in their youth, he’s unable to move against his former friend.

He enlists Newt and his friends (and of course, his fantastic beasts) but chaos ensues when they go up against Grindelwald and his ever-growing legion of followers.

It’s the third film in the five-film franchise.

Eddie returns as Newt alongside Jude as a young Dumbledore and Mads making his debut as Grindelwald.

Meanwhile, Ezra Miller returns as Credence Barebone – with fans getting to see a whole new side of his character.

What happened in Fantastic Beasts 2?

It’s been a good four years since Fantastic Beasts: The Crimes of Grindelwald was released so if you need a reminder…

Grindelwald manages to escape ahead of standing trial, while Newt hunts to find Credence on Dumbledore’s request, believing that he’s part of the Lestrange bloodline.

While Queenie and Jacob are forbidden from being married, due to the laws on magical people marrying those without magic, Grindelwald manages to manipulate her into joining him, using her love for Jacob.

At a rally attended by Grindelwald’s followers, the evil wizard shows a vision of a future global war, encouraging them to spread his word across Europe.

He then conjures a ring of fire that only his followers can step through – Queenie and Credence follow him, while the others are able to escape.

Newt finally presents Dumbledore with the blood pact he and Grindelwald made, with the headmaster believing it can be destroyed. Meanwhile, Grindelwald reveals Credence’s true identity – Aurelius Dumbledore, Albus’ long-lost brother.

Is there a trailer?

Absolutely there is – the trailer, released in December, is below.

What is the release date?

Are any more sequels planned?

JK Rowling previously confirmed there will be five films in the Fantastic Beasts series, meaning there are two more to come after The Secrets of Dumbledore.

No official titles or release dates have yet been confirmed.

Fantastic Beasts: The Secrets of Dumbledore hits cinemas on Friday.


MORE : Fantastic Beasts: The Secrets of Dumbledore review: Eddie Redmayne franchise is still fun but starting to lose its magic

Top Tips To Help You Choose Charities To Support