Fascinating book of vintage photo postcards reveals life in the U.S during the early 20th century

A gun-toting gang, Roosevelt giving a speech and women posing at the Grand Canyon in their finery.

These are all scenes of yesteryear America you’ll find in fascinating new book Real Photo Postcards: Pictures of a Changing Nation – out in May and published by the Museum of Fine Arts, Boston.

It’s revealed that ‘real photo postcards’ became ‘omnipresent’ in small towns and large cities across the United States around the turn of the 20th century thanks to leaps in photography technology by the Eastman Kodak Company, which introduced a portable camera in 1903 that produced a postcard-sized negative that could print directly onto a blank card lined with photo-sensitive paper.

The book explains: ‘Postcard photographers documented scenes worthy of Walt Whitman and seldom, if ever, recorded in other photographic formats.

‘Photo postcards reach across time and history to convey powerful stories about real people, the conditions of their lives, their talents and vocations, their dignity, their cultural identities, and the hopes and aspirations they may have held.’

You can see some of the 317 vintage images that appear in the book by scrolling down. In addition, pictures that feature in the book will be on display at the Boston Museum of Fine Arts until July 25. 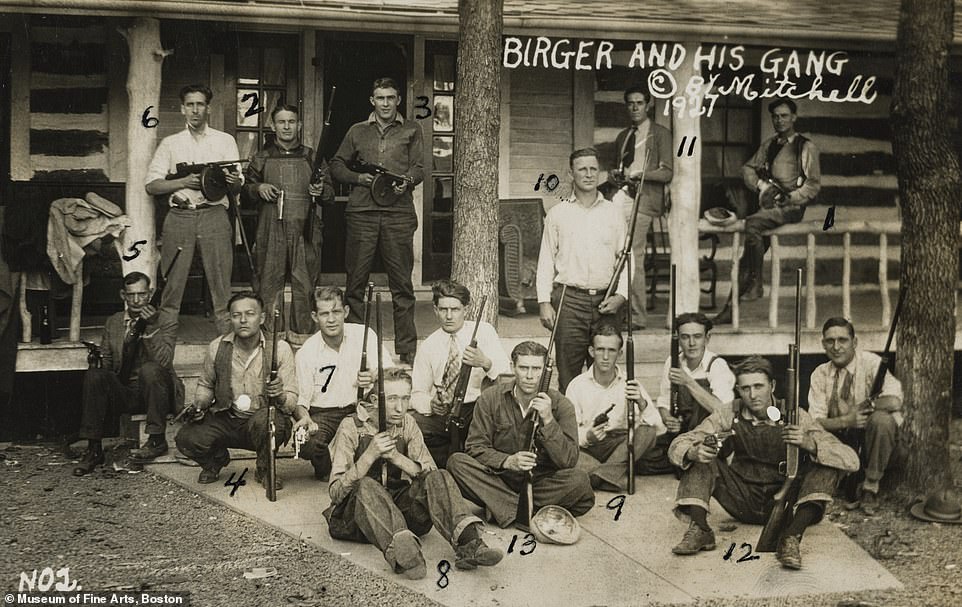 This incredible photograph was taken in Harrisburg, Illinois, by local resident and photographer Alvis Michael Mitchell and shows notorious gangster Charlie Birger and his gun-toting gang. Birger, reveals the book, was ‘as notorious as any gangster anywhere from 1926 to 1928’, with one newspaper story at the time describing Al Capone as ‘the Charlie Birger of Cook County’. Birger’s gang, we learn in the tome, ‘controlled bootlegging and “adult entertainment” across Southern Illinois’, with Birger eventually convicted of orchestrating the murder of a small-town mayor and becoming the last man publicly hanged in Illinois on April 19, 1928. He can be seen in the picture sitting sidesaddle on the porch rail at back-right in a bulletproof vest, the book reveals. Adding further insight, it says: ‘The inscription on [this] card, “Birger and His Gang”, vaults the viewer from quietly eyeing a band of outlaws to considering what photographer Mitchell might have felt as he steadied his camera before all that brandished firepower… though Mitchell suggested to a reporter years later that he had arranged the photo, family lore has it the other way: Birger’s gang enlisted the reluctant photographer, knocking on the door and spooking his wife.’ Despite the 1927 notation on the card, the book’s authors say the date ‘can be narrowed down to within a few days in October 1926, based on the movements, arrests, and deaths of the pictured gang members’ 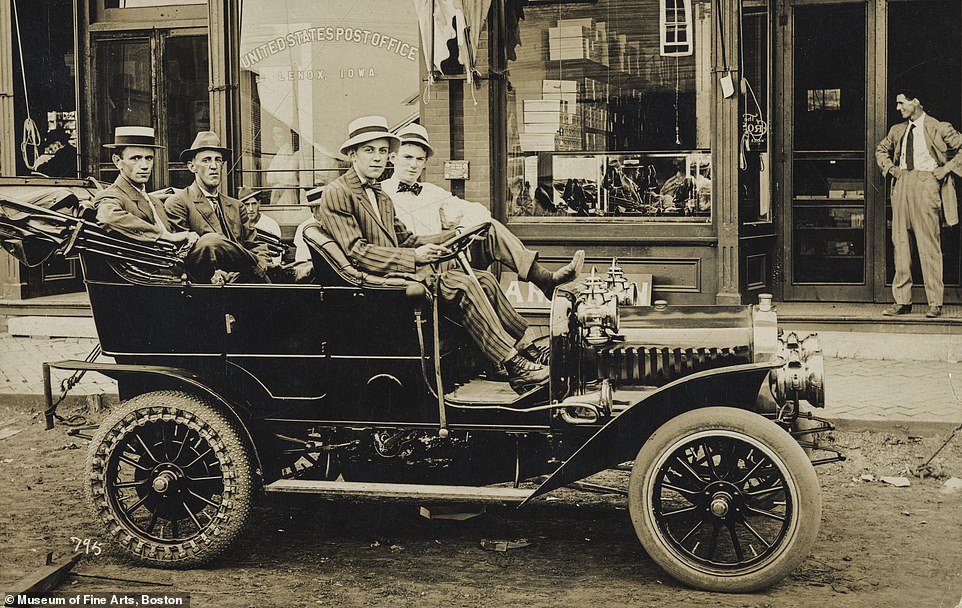 Dating back to around 1909, this postcard shows a group of men outside the post office in the city of Lenox, Iowa 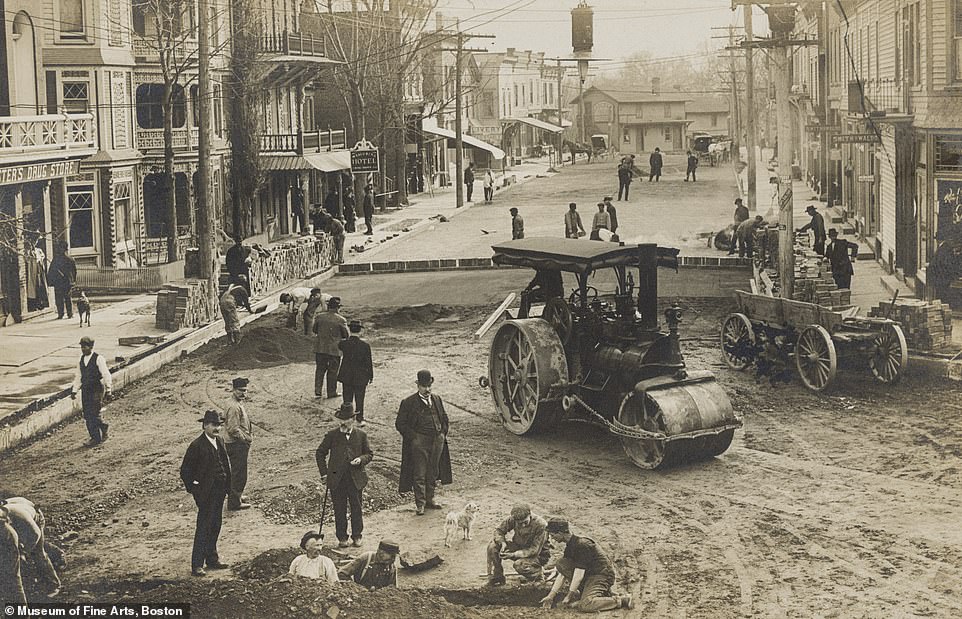 This postcard depicts street layers working outside the Wyalusing Hotel in the town of Wyalusing, Pennsylvania, in 1907. According to the book, real estate development provided good opportunities for photo postcard photographers 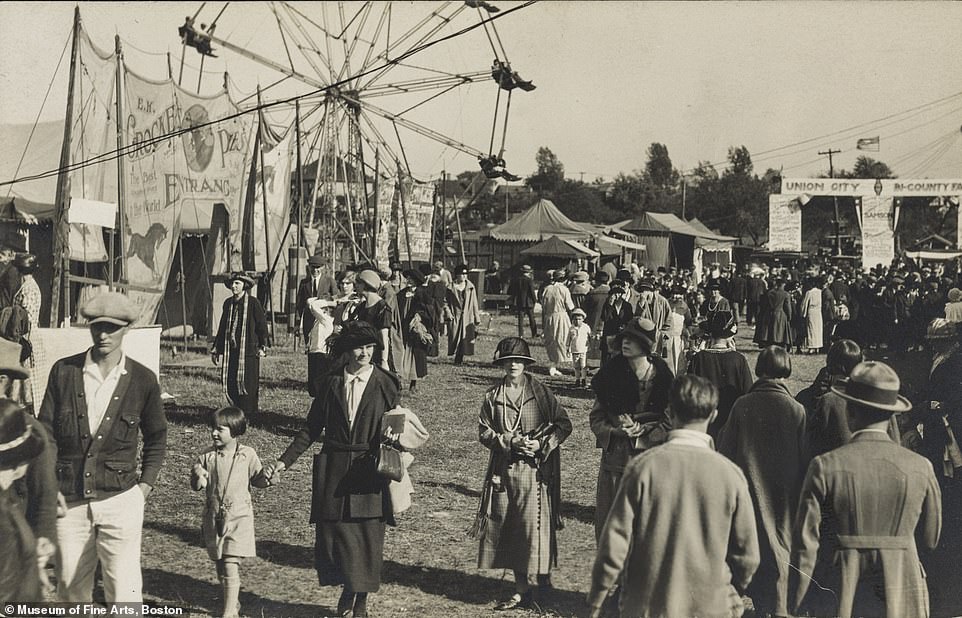 An image taken at Union City Bi-County Fair in Indiana around 1917. The book says of the photo postcard industry: ‘Just as postcard studios could flourish in the quieter corners of the country, away from the commercial photo studios of the big cities, so could postcard photographers find success close to home. They just needed to make sure that their products were tailored to local tastes: local celebrities, local sports teams, champion livestock and vegetables, the midway at the county fairgrounds, or the local quack–medicine salesmen’ 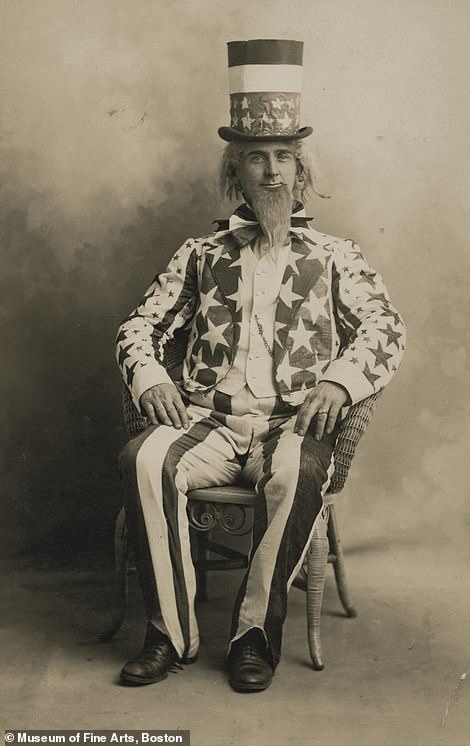 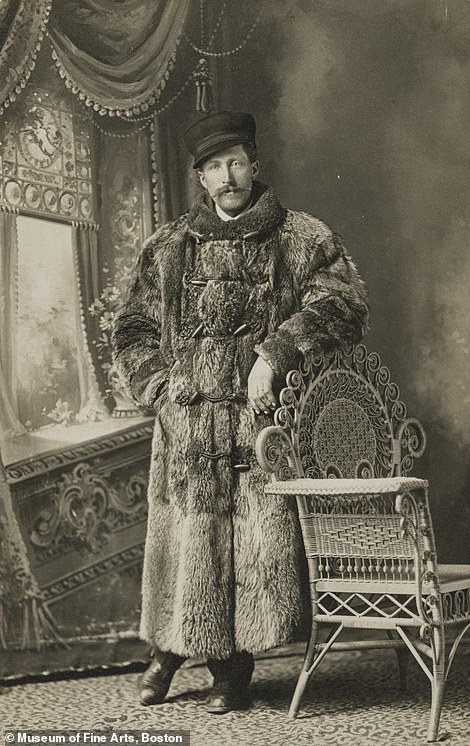 LEFT: A man poses for a studio photo in an Uncle Sam costume in Patchogue – a village in Long Island, New York – circa 1908. The author writes: ‘Uncle Sam as a symbol for the U.S. was ensured not only by the works of nineteenth-century cartoonists like Thomas Nast and James Montgomery Flagg’s “I Want You” recruiting poster during WWI, but also because of everymen like this one, who emulated Sam’s long white whiskers and stars-and-stripes suit.’ RIGHT: Featuring a moustachioed man in a fur coat, this postcard is from 1910. ‘Bearing a message in Norwegian, this card, addressed to Ole Flatland, of Canby, Minnesota, is testimony to the large and vibrant Scandinavian community in the upper Midwest,’ the book notes. It says in the absence of contextual information, ‘it is still possible to read images through clues offered in the physical object of the postcard itself, such as a caption on the front or message on the back, the clothes or uniforms that were worn, an object that was held, a person’s expression or body position, or the props and background chosen by the sitter to express a meaningful representation of themselves’ 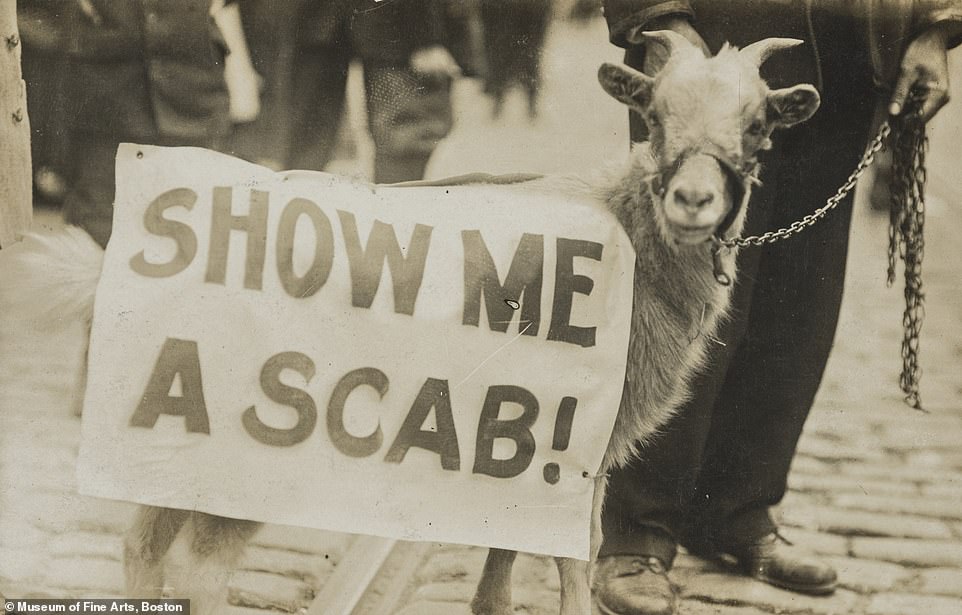 This card likely shows the Seattle Labor Day parade of 1910, the book says. The Seattle Daily Times noted that the hit of that year’s parade was a goat bearing a large sign that read ‘Show me a Scab’. The goat led the machinists’ delegation in the parade 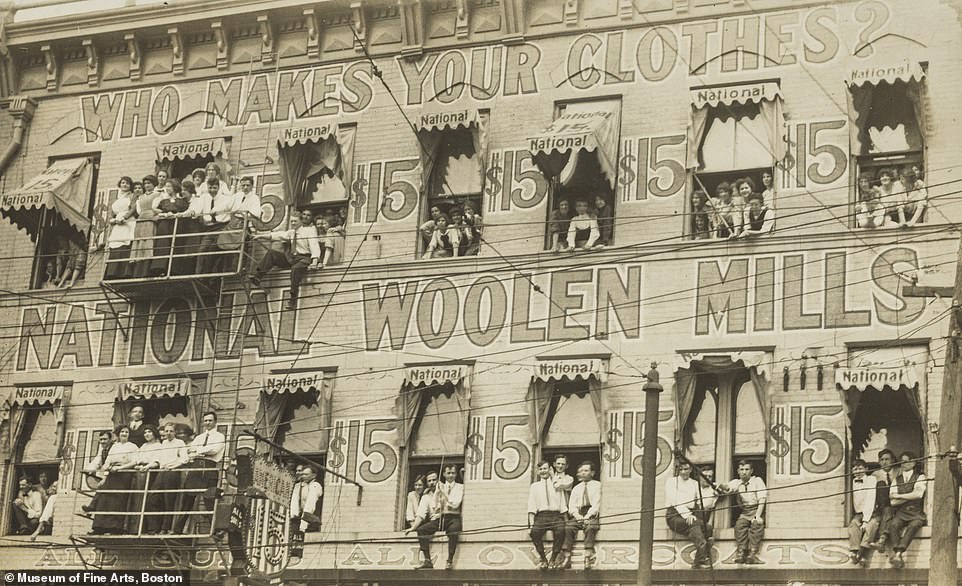 A shot taken at the National Woolen Mills in Wheeling, West Virginia, around 1914. The book notes that some photos were ‘clearly staged’ in a bid to ‘convey a moment of offhand reality’ and serve as an ‘advertisement’ 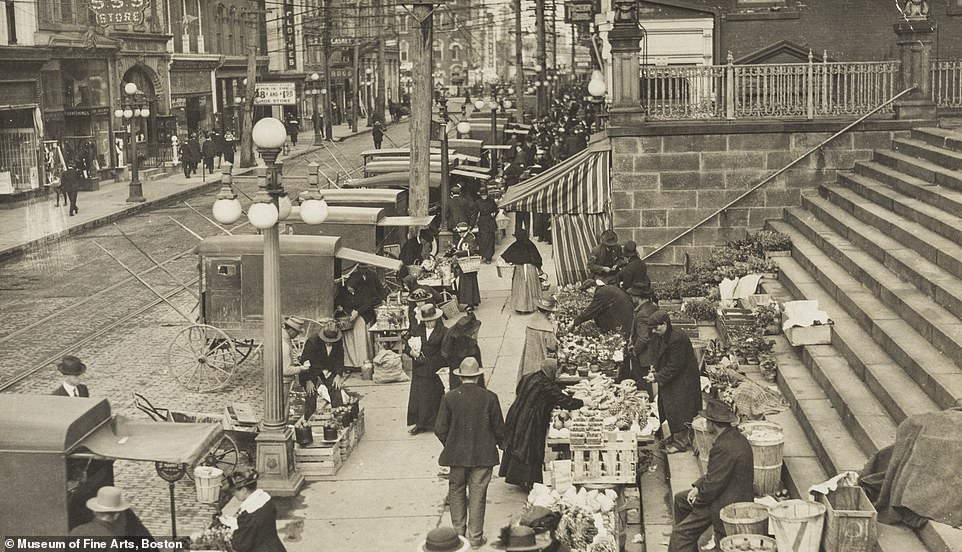 The Amish market in Lancaster, Pennsylvania, was the focus of this postcard snap, captured in 1925 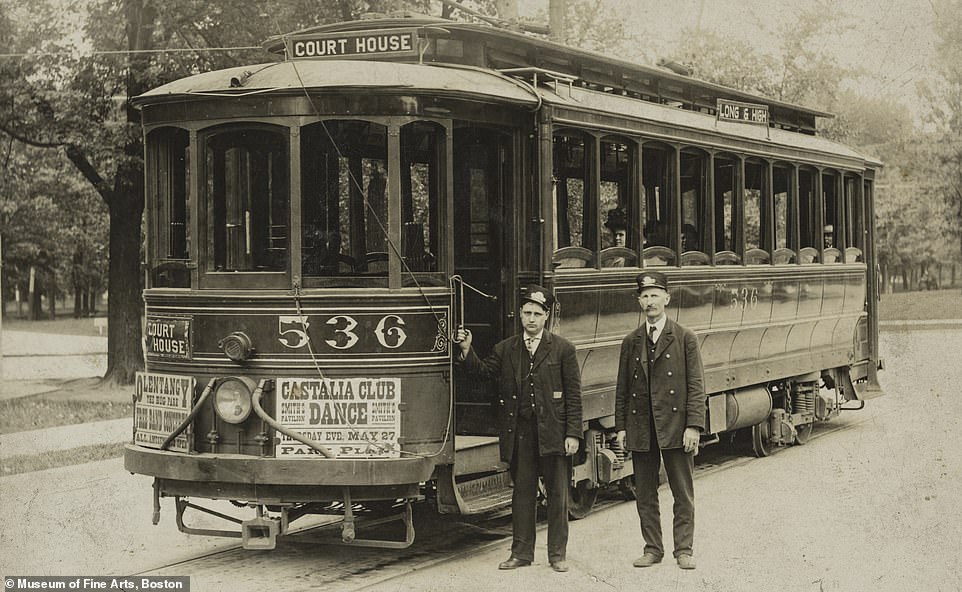 The photograph above shows two workers posing outside a streetcar in Columbus, Ohio, around 1909 or later 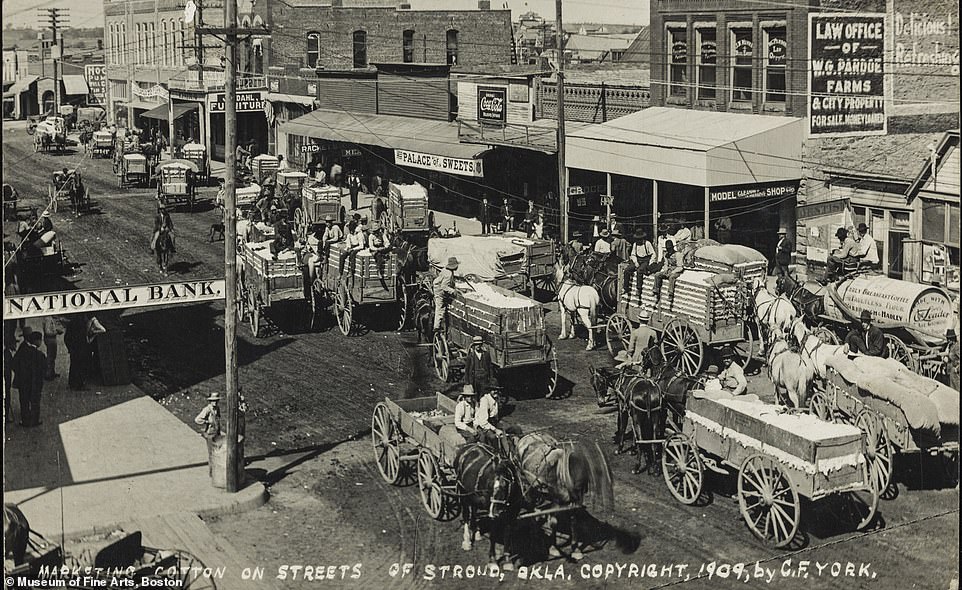 Cotton being sold on the streets of Stroud in Oklahoma around 1909. The book’s authors say that photographers turned their attention to ‘main streets’ in towns and cities with the hustle and bustle creating animated shots. They note that the main street ‘is the place where the banks and stores and courthouses line up to demonstrate wealth and pride and civic virtue’ 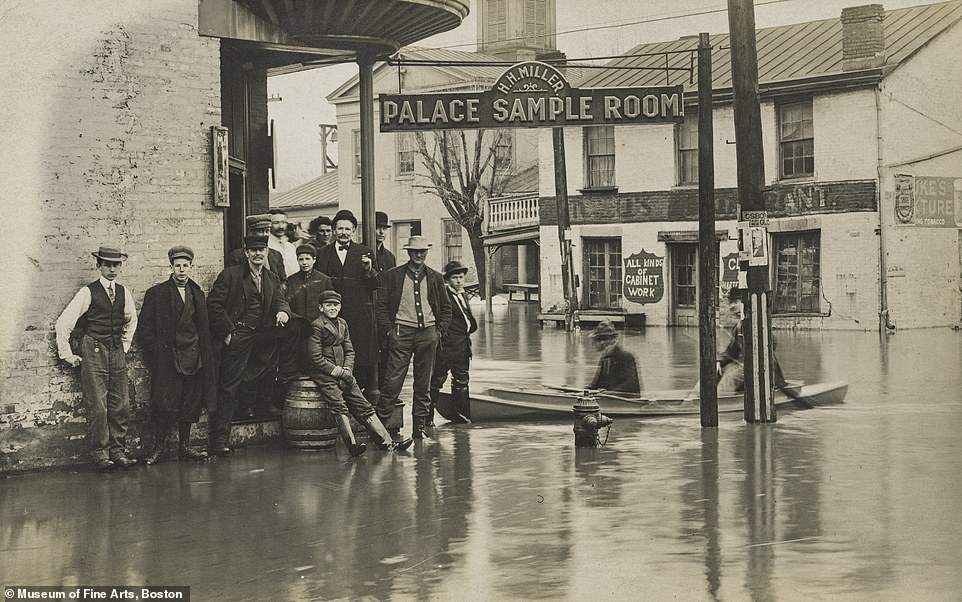 Men huddle together outside a bar, HH Miller’s Palace Sample Room, in the small town of Galena in Illinois, during the Valentine’s Day flood of 1911. The book says that the town ‘faced flooding every spring, but the Valentine’s Day flood of 19111 was particularly bad’. It continues: ‘HH Miller, the proprietor of the bar in this postcard, used the card as a New Year’s greeting the following January: “This is my saloon, the wader was to the floor. Behind poast [sic] is myself and Berne and the man with white coat is my bartender. Good night.”‘ The tome also notes that these ‘news-style’ photo postcards, documenting ‘fires, floods, explosions, political rallies, strikes, and parades’ were ‘the direct forebear to the citizen journalism of the digital age, captured by ubiquitous smartphones and disseminated through social media’ 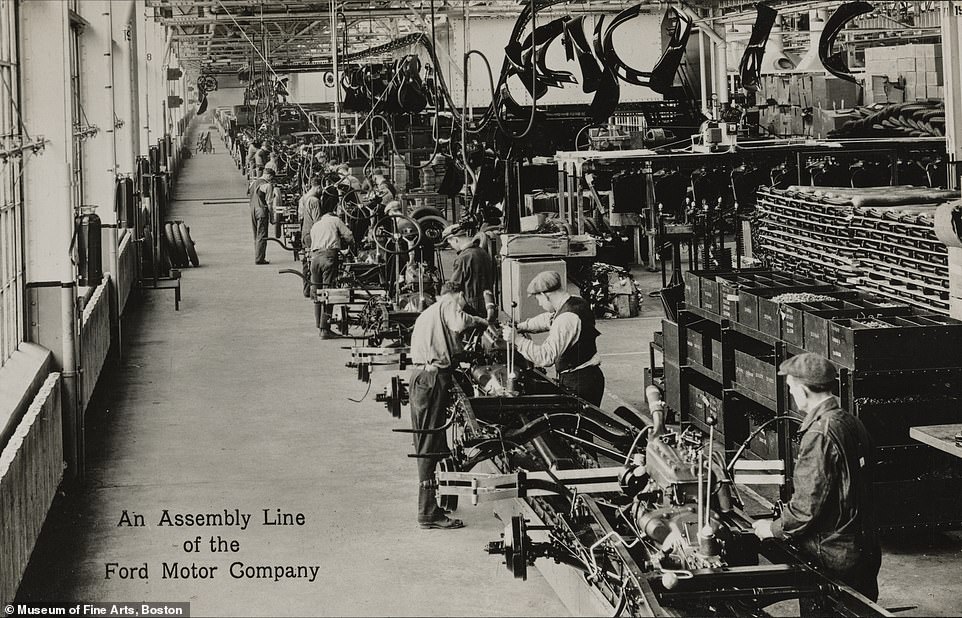 An assembly line of the Ford Motor Company factory photographed in the mid-1920s in Dearborn, Michigan. The authors write: ‘The photographs on these cards capture the United States in the early twentieth century with a striking immediacy. It was a time of rapid industrialization, mass immigration, technological change, and social uncertainty – in other words, a time much like our own’ 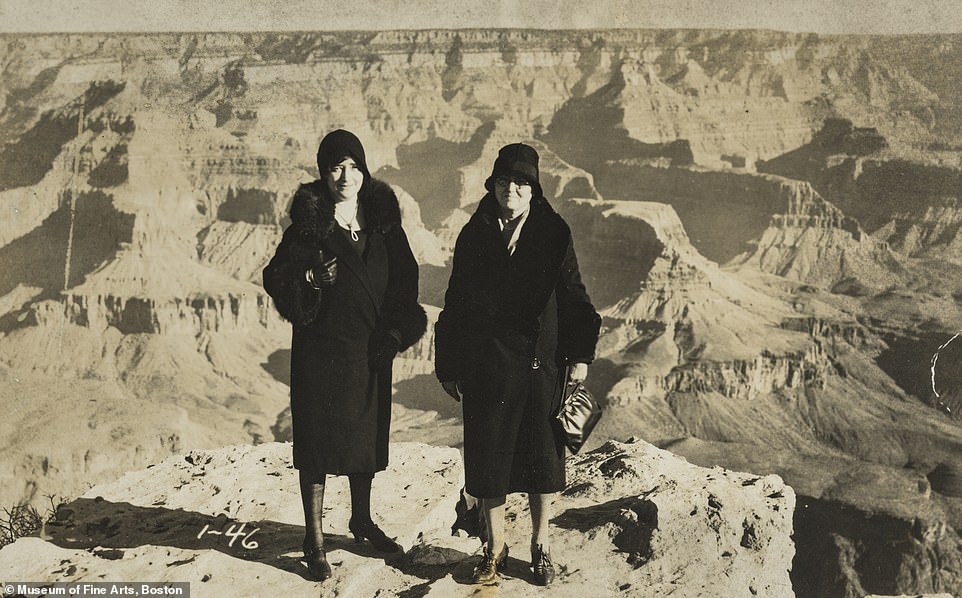 This photo, taken on January 14, 1929, shows two elegantly dressed women at the Grand Canyon. The book says of the shot: ‘The women stand before what is today a hackneyed tourist view… but what was then remarkable, a novelty. Their heeled shoes and clutches indicate that they did not rough it to get there, but were neatly dropped, likely by a driver, in a predetermined location designed to ensure that they could procure a photograph that would communicate, in effect, that they had “been there, done that”‘ 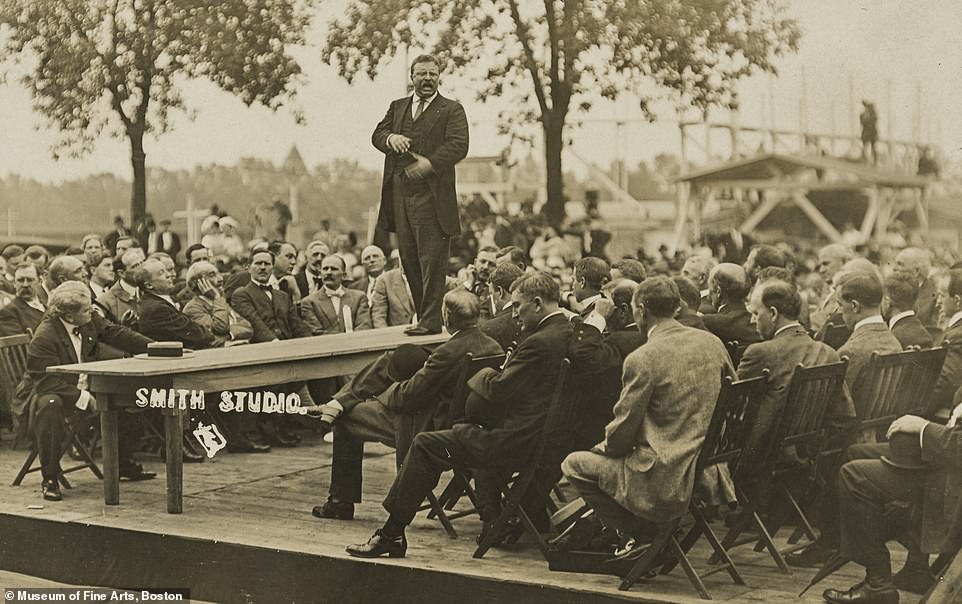 Look up and you’ll see former U.S President Theodore Roosevelt speaking to a crowd at Freeport, Illinois. It’s thought the picture was captured in 1910, the year after his presidency came to an end. The book reads: ‘In 1910, Roosevelt undertook a transcontinental trip that passed through Illinois, stopping in Freeport, Belvedere, and Chicago. The events in Freeport were planned for September 8, 1910’ 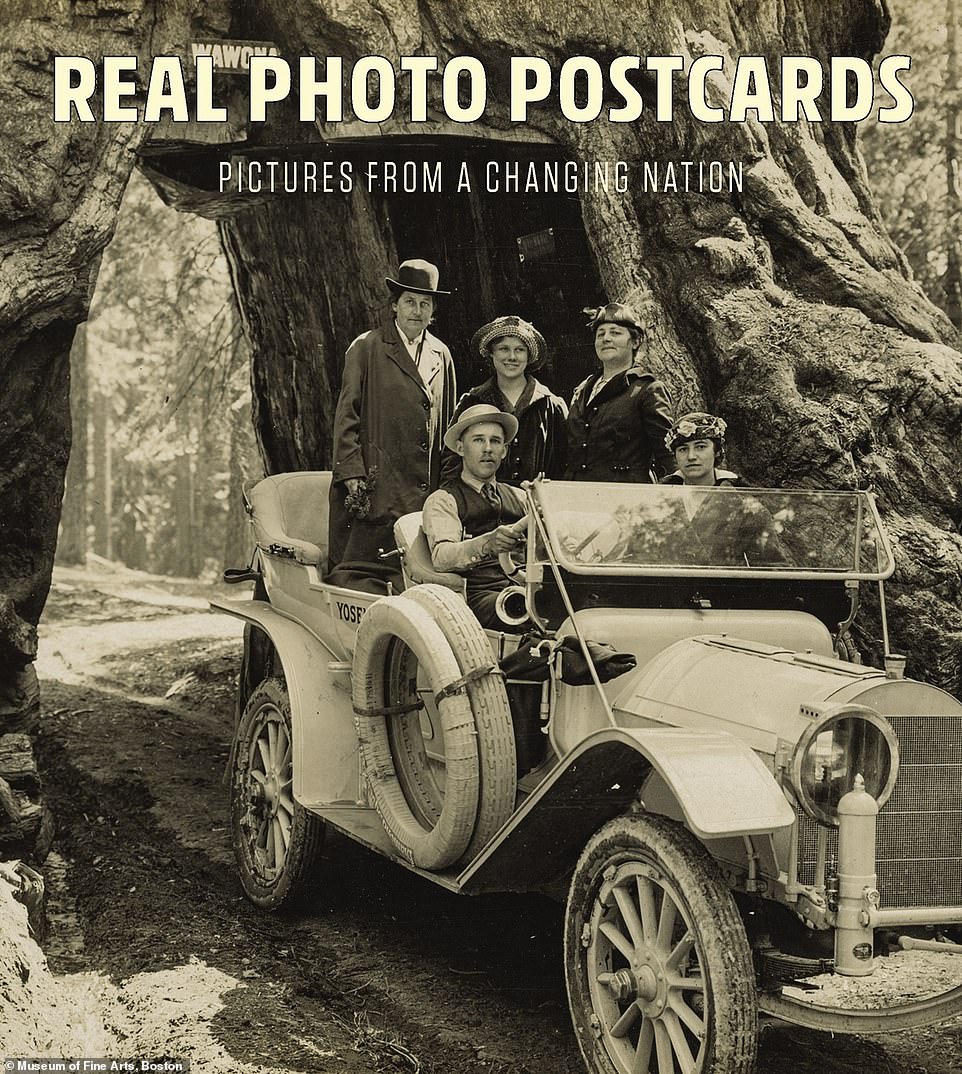 Real Photo Postcards: Pictures from a Changing Nation by authors and historians Benjamin Weiss and Lynda Klich is priced at £34 ($45). The cover picture shows tourists at the Wawona Tree in California’s Yosemite National Park in 1908