The ghosts of bygone times lie all around us.

And here we present fascinating photos of them – pictures of abandoned buildings, boats, bridges and more that link the present with the past and beckon us to unravel their stories.

There’s the enormous palace-like army barracks that lies in ruins in Hungary, a moss-covered railway track in Taiwan and a rusting old French tank sitting incongruously on a remote and rugged stretch of Norwegian coastline.

This rummage through history also takes in a locomotive lying upside down in a river and the world’s longest curved wooden trestle bridge.

One photo, meanwhile, shows a haunting set of stone stairs in the middle of a forest.

Scroll down and embark on an intriguing journey of discovery into a world lost in time. 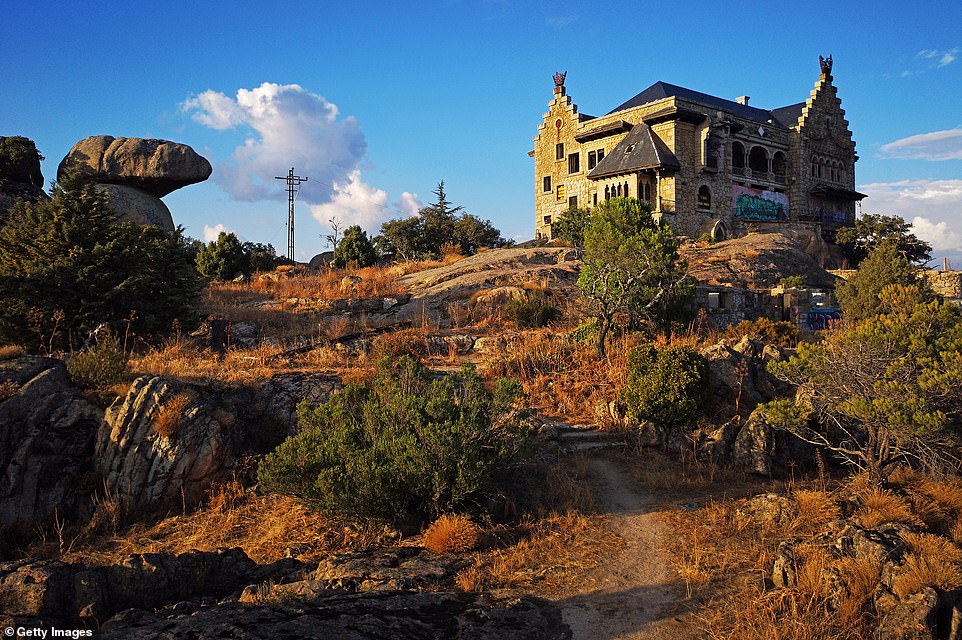 Located in the Spanish town of Torrelodones, close to Madrid, the Palace of Canto del Pico dates back to the 1920s when the Count of Las Almenas built it. After the death of his only son, the count left the estate in 1947 and it was inherited by General Franco, the former dictator of Spain, who used it as a weekend residence. When he died in 1975 it passed to his heirs, who eventually sold it to Stoyman Holdings Ltd in 1988. The firm had hoped to transform it into a luxury hotel. However, it has lain in ruins since then as attempts to gain permission to turn it into accommodation failed. Recently, after years of wrangling with the authorities, it was reported that Stoyman Holdings Ltd was just waiting on approval to start work on restoring the building 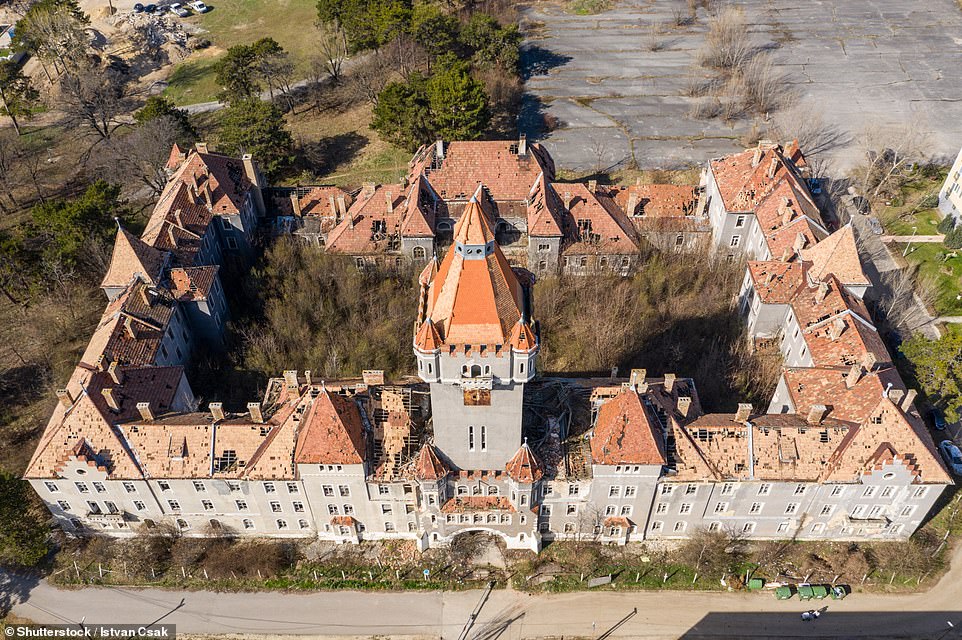 Hajmaskér Barracks was built in the 19th century under the orders of Franz Joseph I, leader of the Austro-Hungarian Empire. It is located in the small village of Hajmaskér, in present-day Hungary. According to Atlas Obscura, it grew to become one of the biggest barracks in the empire and during the First World War housed a prisoner-of-war prison and even had its own currency. During World War II it became a Nazi base. After their defeat it was occupied by Soviet soldiers until the collapse of the Soviet Union in 1990. It  was then abandoned and has been left to the elements ever since 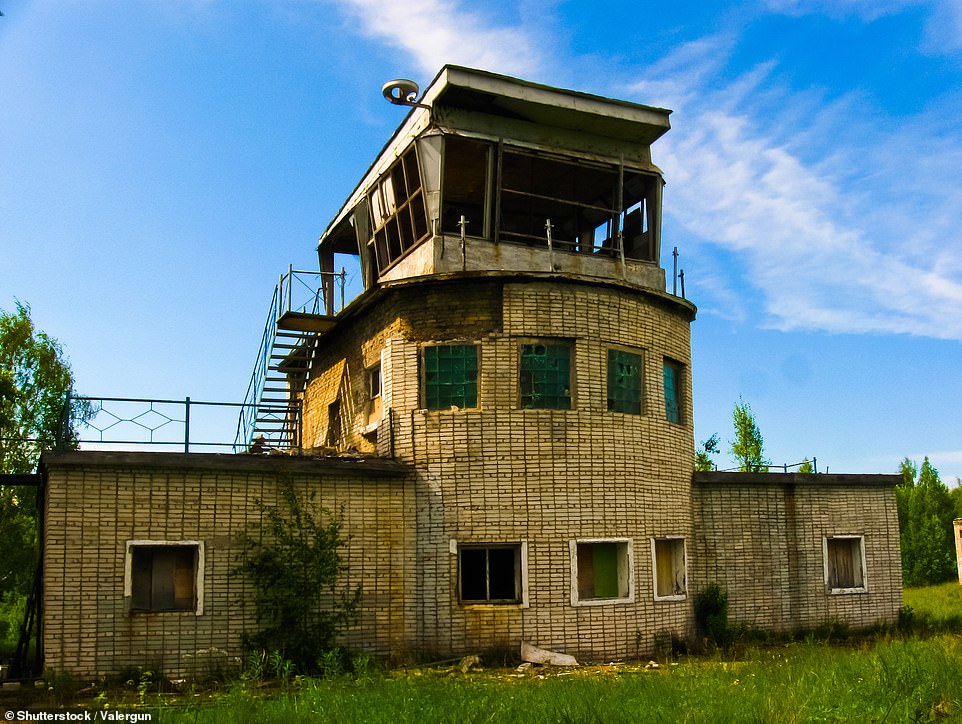 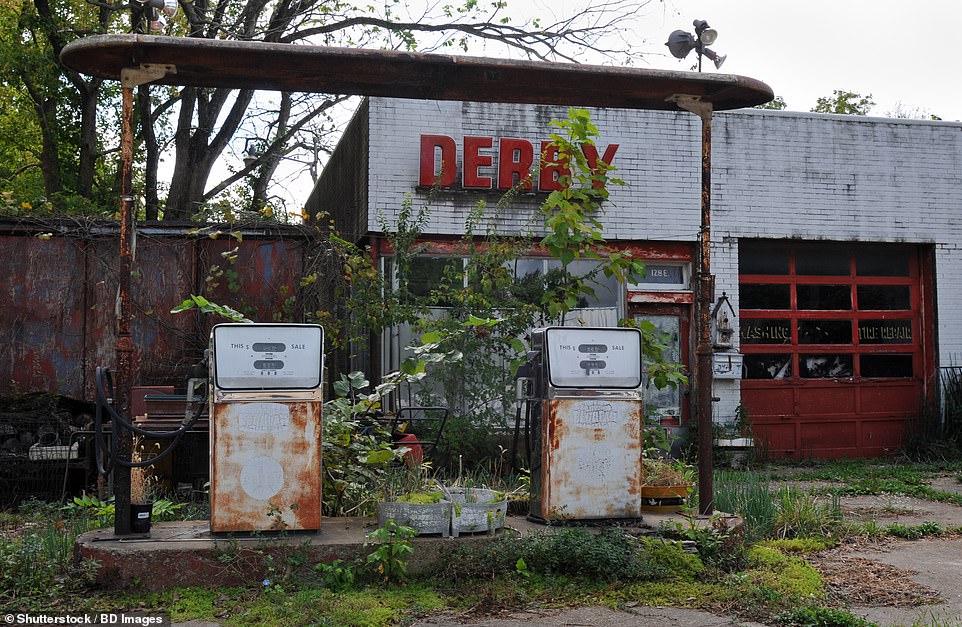 Rusting gas pumps at an abandoned Derby service station and garage in the city of St James, Missouri. Route 66 used to run through the city 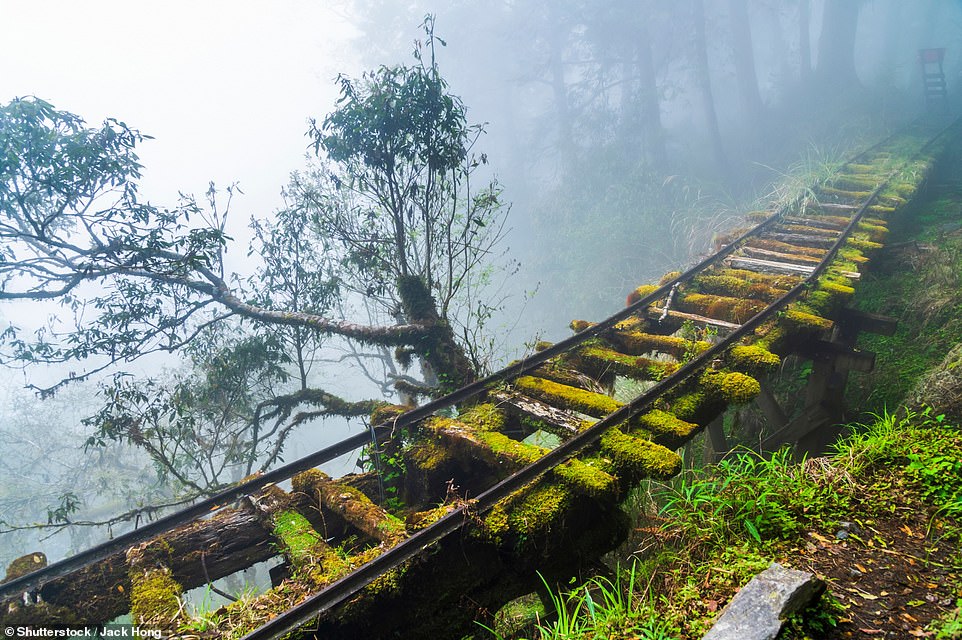 An abandoned section of track on the former Jancing Forest Railway in Taipingshan National Forest Recreation Area in Taiwan. The former railway was 3.4-miles long and now part of the track runs alongside a short hiking trail called the Jancing Historic Trail. Describing the experience of walking the trail, Taiwan travel guide Taiwan Scene says: ‘You’ll see remains of the tracks, cross a suspension bridge, and encounter all kinds of Taiwanese plant life, including cherry blossoms if you visit during the right season. You may even see the odd disused log cart, giving you a glimpse into Taipingshan’s logging industry past’ 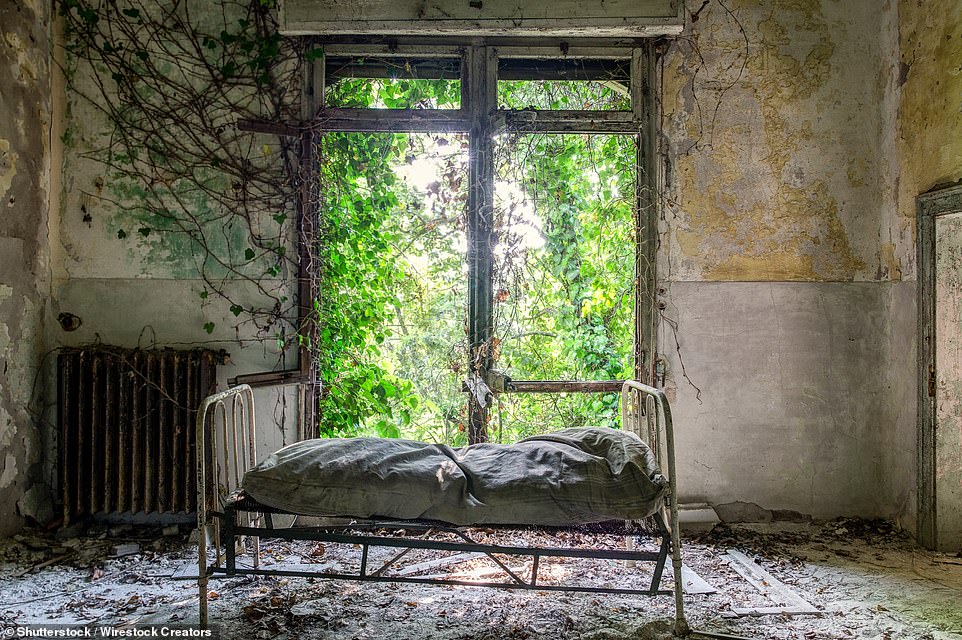 Inside a ruined hospital on the abandoned island of Poveglia in the Venetian lagoon in Italy. It’s an island with a fascinating, if grim, history. Its population grew in the 9th century, but in 1379 during an attack on Venice, the people there were moved to Giudecca – another island in the Venetian lagoon. It remained uninhabited for centuries until the 1770s, when it became a checkpoint as well as a quarantine station, where countless victims of the plague were sent to die. In 1922, the hospital buildings on the island were converted into asylums for the mentally ill and were later used as nursing homes. Since the nursing facilities closed in 1968, it has largely been uninhabited and visitors are banned. In 2014, Poveglia was sold by the Italian government for $521,000. It is hoped the old asylum can be converted into a luxury hotel 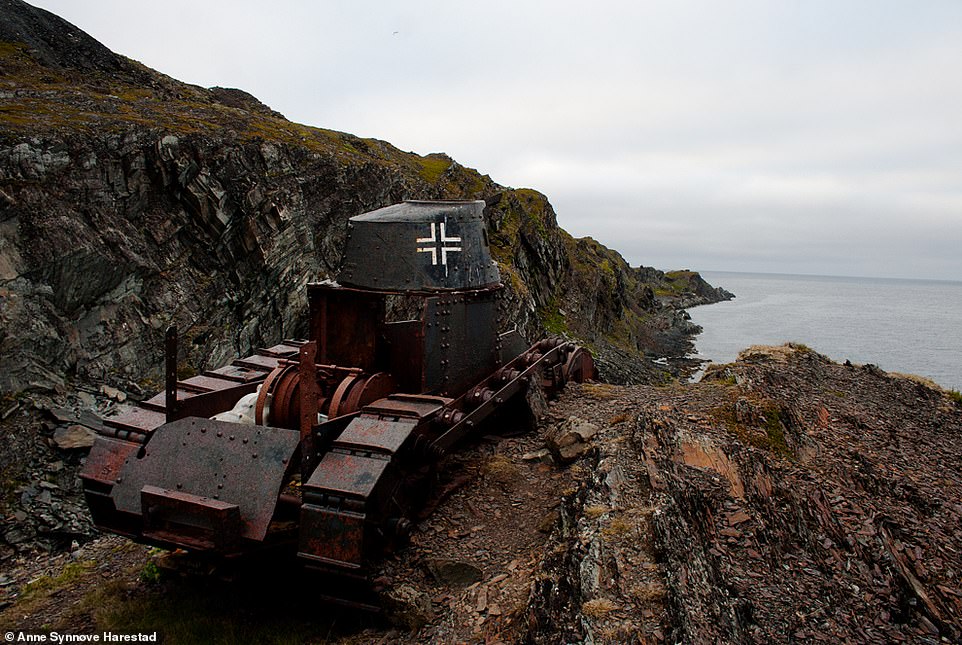 A tank lies abandoned near the Norwegian hamlet of Veidnes in the far north east of the country. It is believed to be a French Renault FT tank that was captured by German forces and used during the invasion of Norway in 1940. The photographer who took this image, Anne Synnove Harestad, said: ‘The locals have always been very respectful of all World War II remnants but over the last few years, increased exposure has led to an increase in tourists “robbing” it and stripping it for parts’ 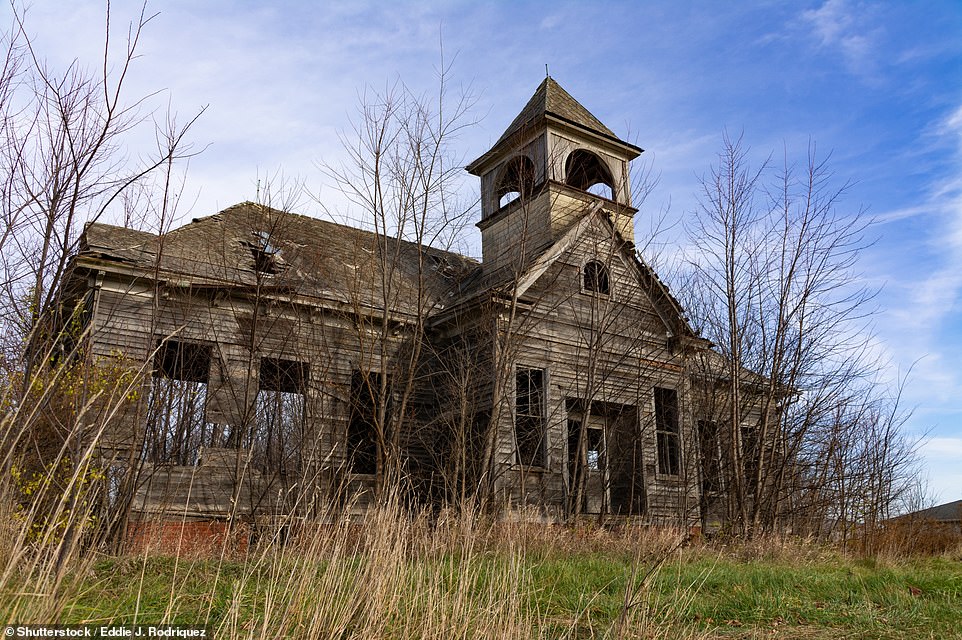 This abandoned school building in Elmira, Illinois, dates back to 1851 and was in operation until 1964. By then a new school building had been created elsewhere in Elmira. It has now been left to ruin and the back wall of the building is missing 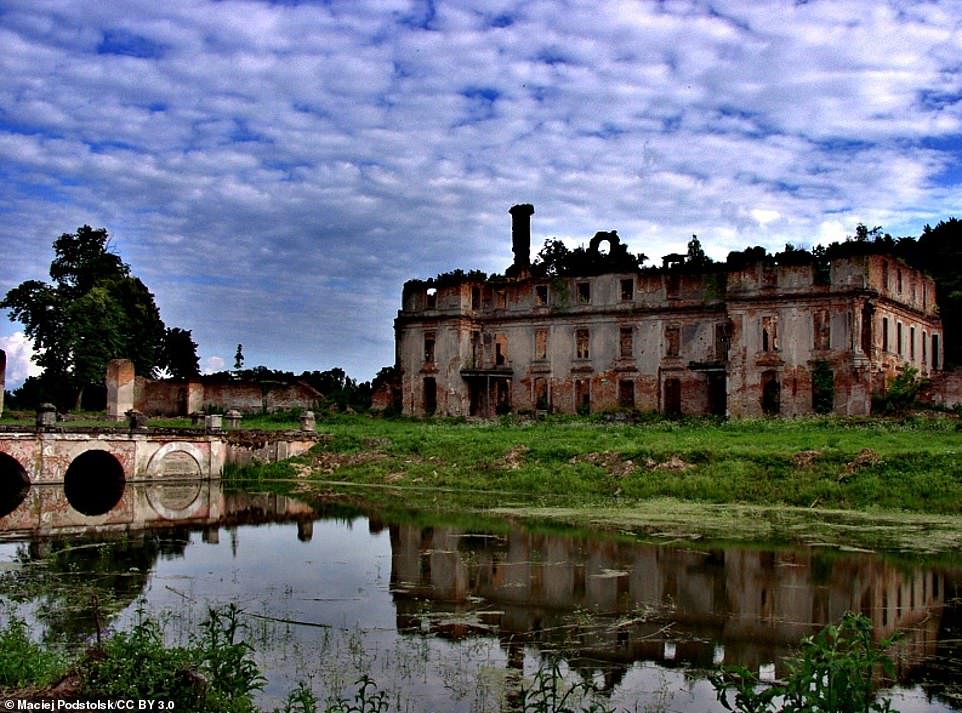 These ruins are all that remain of Schloss Schlobitten – a castle in the village of Slobity in Poland. The castle dates back to 1624 when it was built for the Dohnas, a German noble family. However, during the Polish-Swedish War (1600-1629) the castle was devastated by looters and only poorly restored. But between 1695 and 1722, the castle underwent a major restoration and extension in the Baroque style. It stood until 1945, when it was set on fire by the Red Army, the inhabitants having fled. The castle has been listed on Poland’s list of historical monuments since 1968 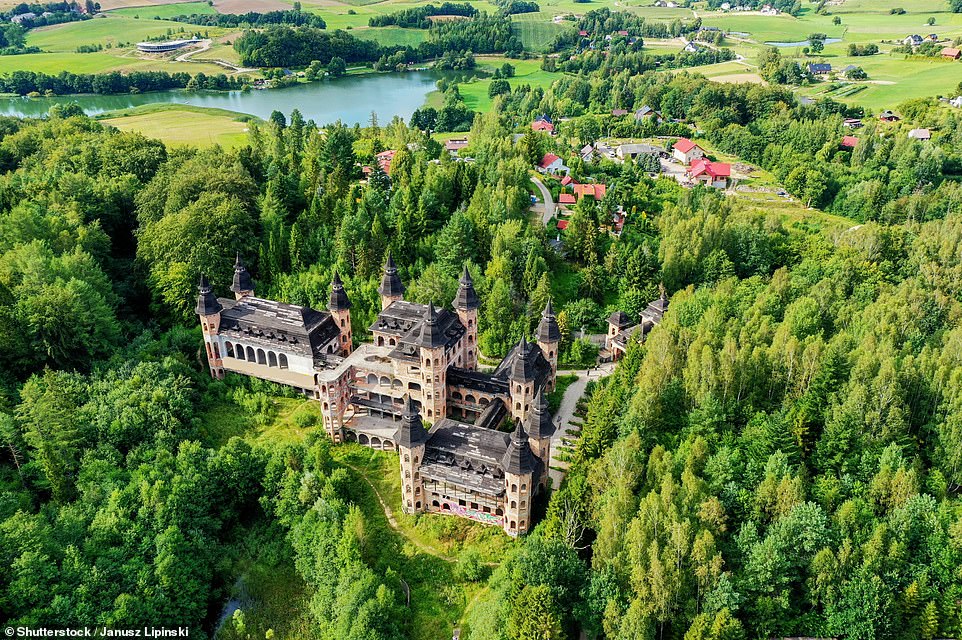 This castle was abandoned before it was even completed. Called Lapalice Castle, it is located in the small Polish village of the same name. Construction began in 1979, the building designated as a home and studio for artist Piotr Kazimierczak. According to Atlas Obscura, Kazimierczak planned for it to be a ‘grand estate, complete with a swimming pool, ballroom, ramparts, and 12 towers representing the 12 apostles’. However, building work hit a snag when officials realised they needed planning permission. In addition, the project also ran into financial difficulties. Now, all that remains is an empty shell 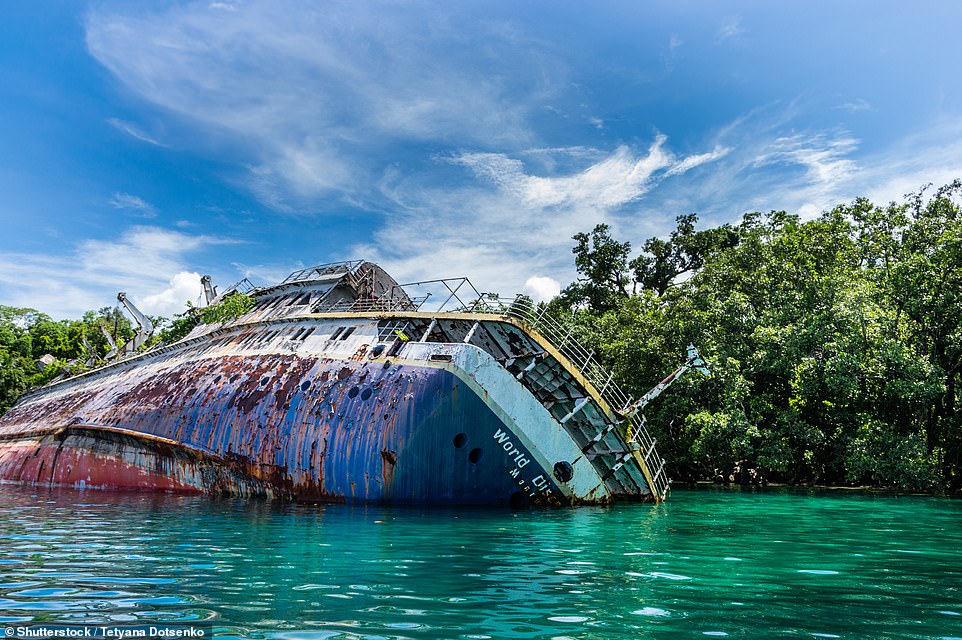 The rusting wreck of the MS World Discoverer cruise ship lies abandoned in Roderick Bay on the Solomon Islands. The vessel came to rest there in 2000 after it struck an unchartered reef nearby, causing it to list. The ship was brought into Roderick Bay, where all the passengers and crew were safely rescued. According to Atlas Obscura, several attempts have been made to salvage the ship but none have been successful 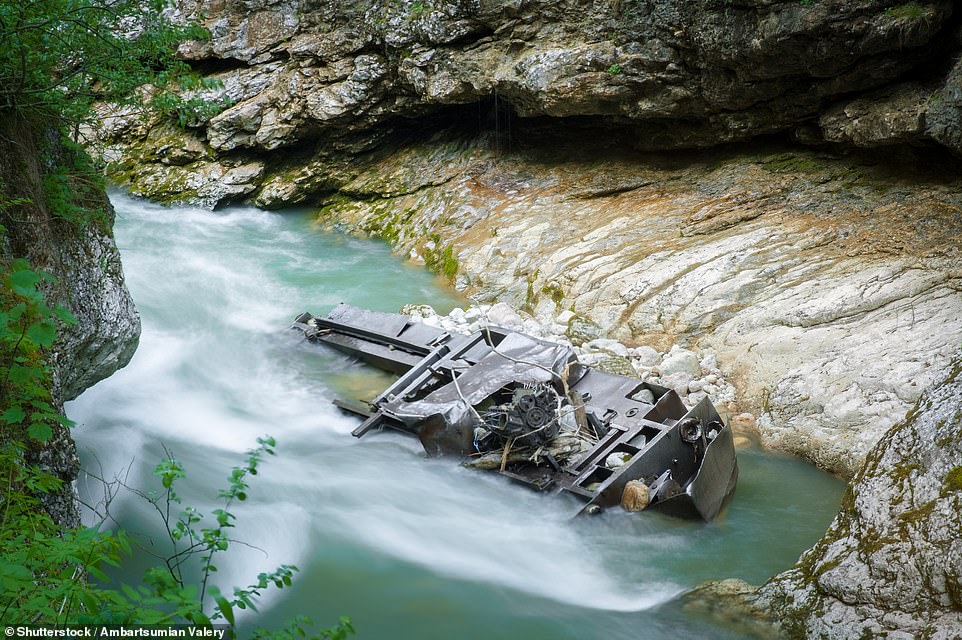 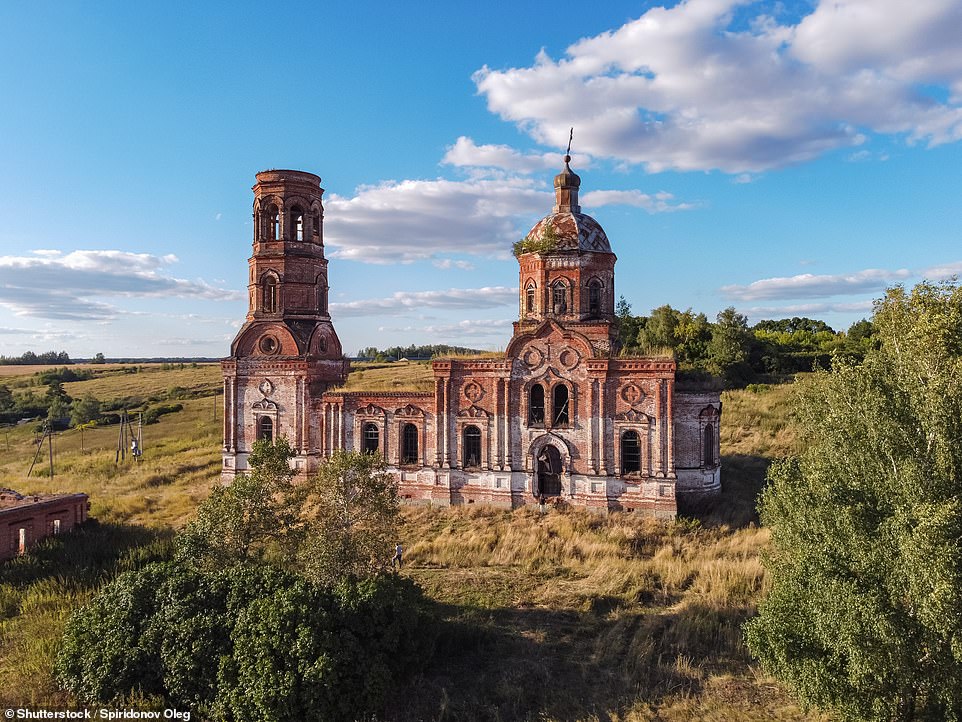 Left to rack and ruin: An abandoned church in the small Russian village of Zasechnoye, in the north west of the country 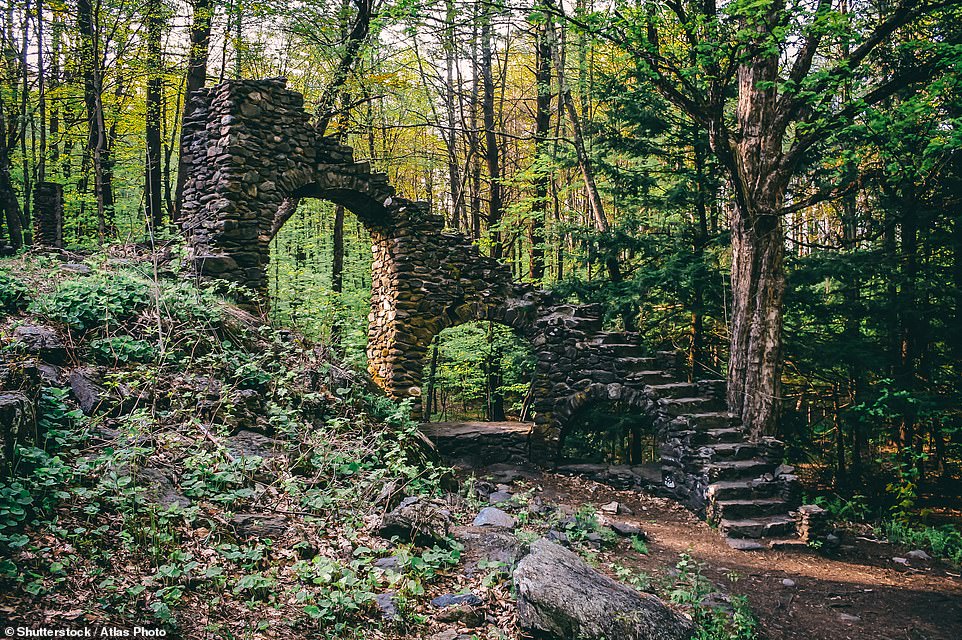 This eerie stone staircase is all that remains of a grand house in Chesterfield, New Hampshire, that burned to the ground. It was owned by famous Broadway costume designer Madame Sherri and, according to Atlas Obscura, it was here that she would throw ‘fabulous parties’ in a property that many referred to as a ‘castle’. However, Madame Sherri fell on hard times and by the 1960s, the castle was disused. After a fire in 1962, all that remained were the foundations and this section of staircase. Walking trails have been added around the ruins and the forest is now called the Madame Sherri Forest 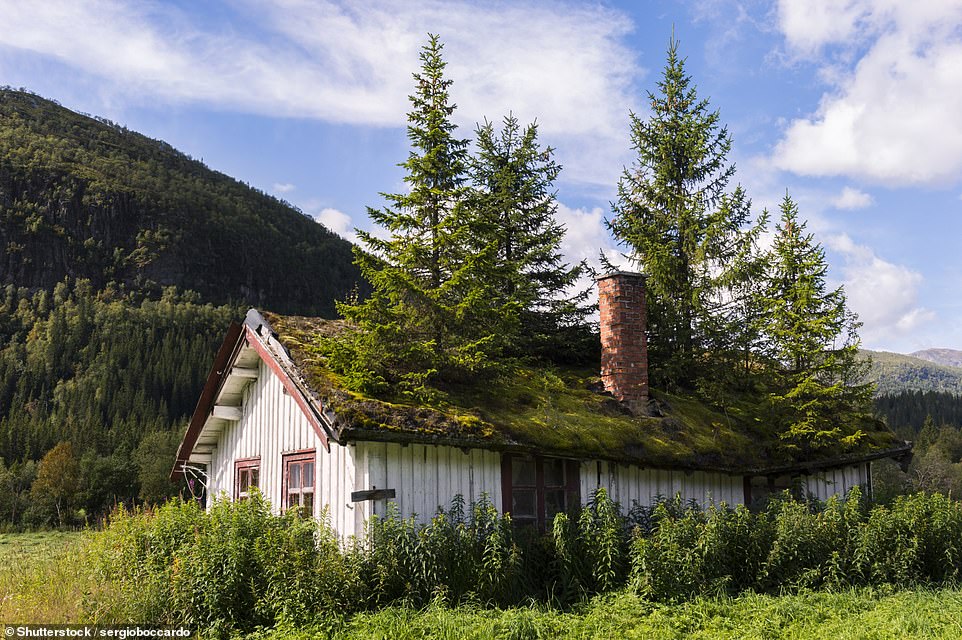 Roof garden: Snaps of this cottage rack up thousands of likes on Instagram. It can be found near Tuv in Norway, just over 100 miles from the country’s capital, Oslo 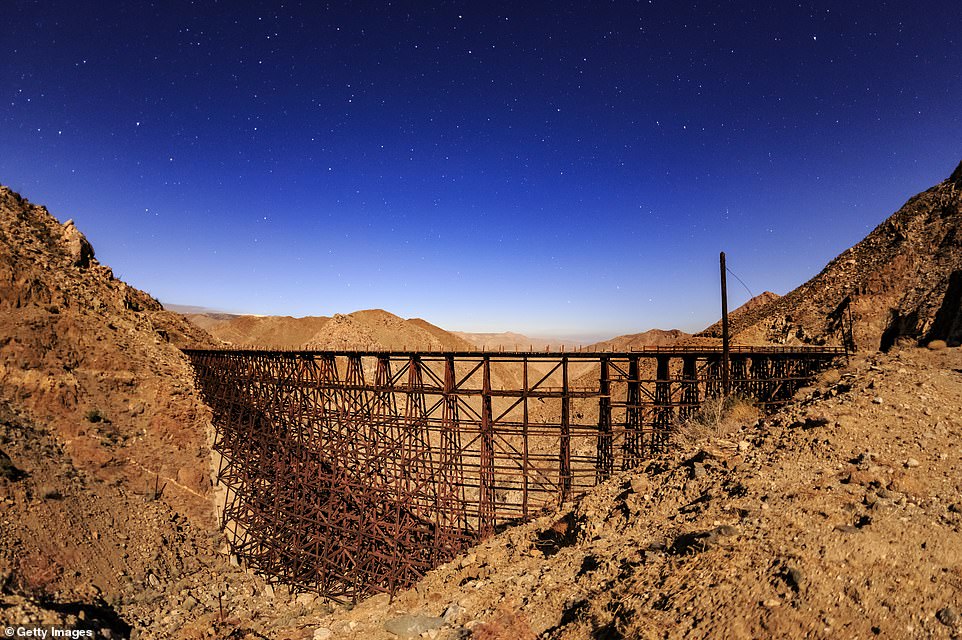 This is the awe-inspiring Goat Canyon Trestle Bridge in Anza-Borrego Desert State Park in California. With a length of 750ft (229m) and a height of 200ft (61m), it is the longest freestanding curved wooden trestle bridge in the world. It was built using redwood timber in 1933 as a connection in the cross-border San Diego and Arizona Eastern Railway, which linked San Diego with Plaster City via Tijuana in Baja California. The railway was engineered through such treacherous desert terrain that it was dubbed the ‘impossible railroad’. The last train to cross the remote trestle was in 2008, when it was closed for repairs that have still not been carried out. Today it’s a popular destination for hardy hikers – reaching it requires preparation as the trail there is tough, barely marked, completely lacking in shade and temperatures can be dangerously high. A sign on the bridge warns visitors that it’s unsafe and that crossing it is trespassing 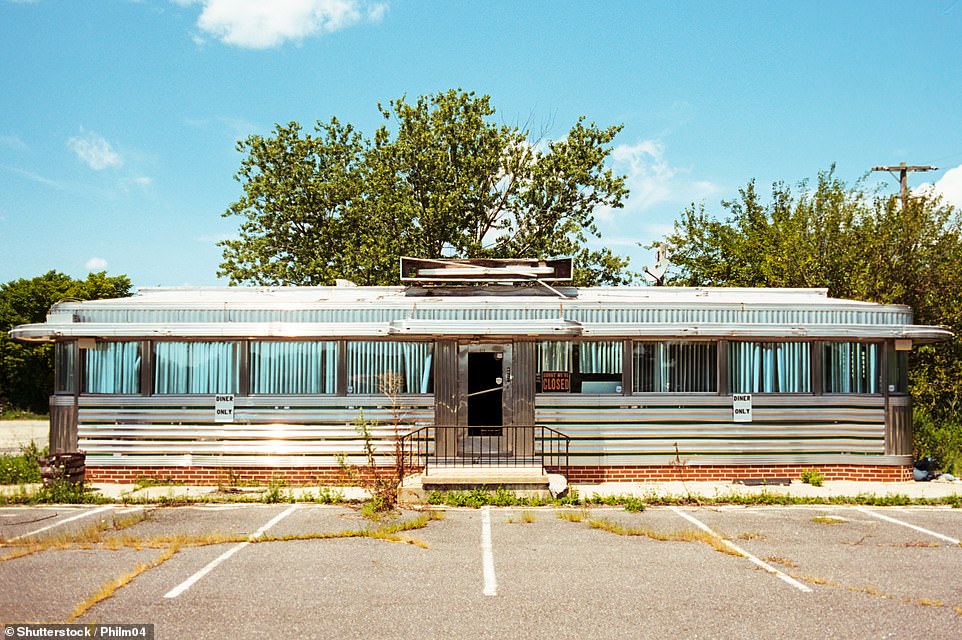 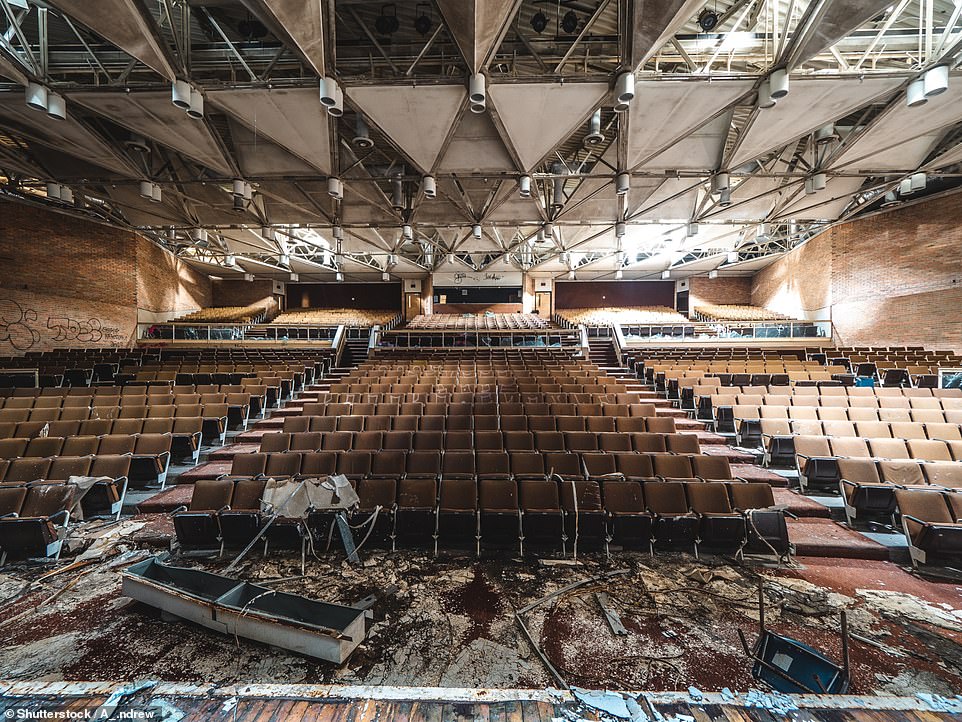 Pictured is the auditorium of an abandoned high school in Detroit. Dozens of schools have opened, closed and been either abandoned or demolished there. Urban adventure tour companies run photo tours of some of the sites 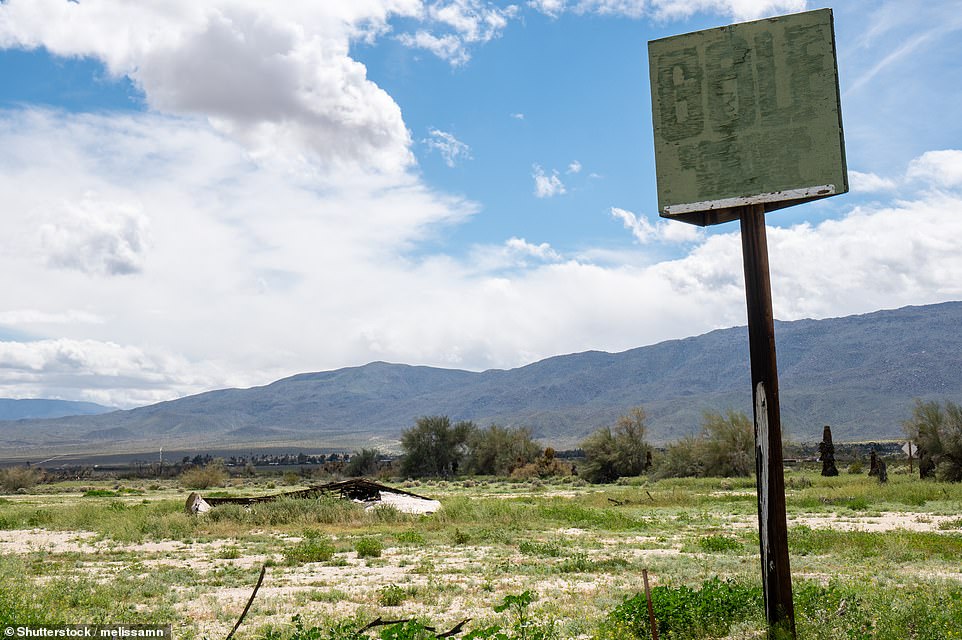 An old rusty sign is all that’s left of a golf driving range in Borrego Springs in California. The end for this particular golfing spot did not signal the end of golf in Borrego Springs as a whole, though. Today, the area is home to several golf courses, including an 18-hole championship course designed by Tom Fazio 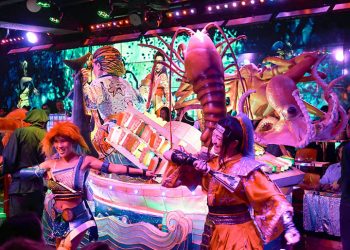 Tokyo, the capital of Japan,... 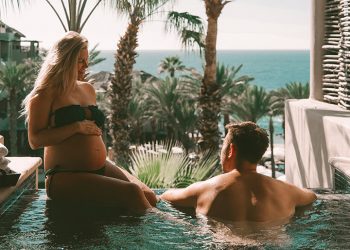 The Best Places to Babymoon in Cabo • The Blonde Abroad

The Best Places to...