Fashion excess on show in Paris, but gentler tweaks shine 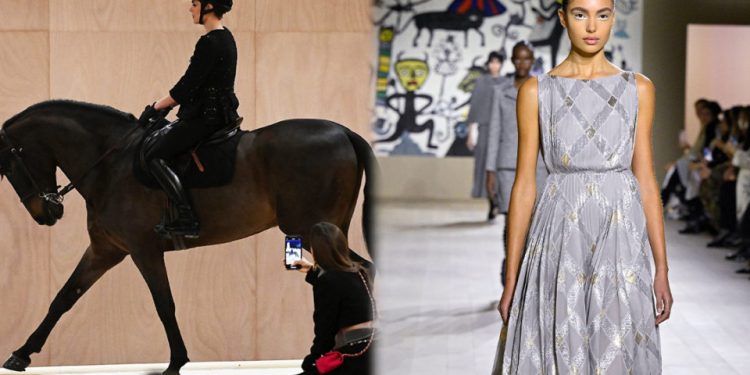 
The Haute Couture shows were on this week in Paris, and along with the breathtaking collections were a couple of publicity stunts, both of which misfired.

The first was the appearance of Kanye West and his new girlfriend of three weeks, Julia Fox, front row at the Schiaparelli show. Designer Daniel Roseberry had previously fitted out the ‘couple’ in a truly hideous complementary denim ensemble for photo opportunities, and for the show itself they arrived in gothic black, West donning a full face mask/balaclava, while Fox idly vaped indoors and stared at her own shoes.

The whole of the fashion world, desperate for clicks and profits, conveniently ignore the fact he is a MAGA-embracing idiot who visited the Oval Office to tell Donald Trump he considered him a father figure. But this time, it feels like at least some of the fashion fans have had enough of all this bollocks. The negative response on social media was immediate, with “Please stop, do not make these tacky people a thing” the sentiment du jour.

It was a great shame that Roseberry felt the house needed that celebrity moment, as his beautiful, theatrical designs are making waves of their own. They don’t need over-hyped attention seekers to validate the message.

I’ve experienced a number of ill-judged animal appearances at runway show over the years, with frightened wolves on a leash at Alexander McQueen and terrified rats at Tsubi, and I’m here to tell you animals on the catwalk are never a good idea, neither for the nerves of the audience or, more importantly, the poor animals.

In the wake of the Prince Andrew situation, I’m not sure the appearance of royalty is a master stroke either, to be honest.

The outrage was swift, animal lovers furious at the sight of a horse cantering around an indoor venue simply to sell clothes.

Again, it was unnecessary, as designer Virginie Viard’s Constructionist collection was fresh, gorgeous and wearable and did not require the tone-deaf, aristocratic cliché.

Meanwhile, some genuine and welcome news was being made over at Valentino, where Pierpaolo Piccioli showed the most spectacular collection on models of all sizes, from 0-10, which in the traditional world of couture and pin-thin house models is truly ground-breaking.

It seems much more relevant to be concentrating on and promoting inclusivity, and a reboot of how the industry has always worked, in a bruised and post-pandemic world.

At Dior, Maria Grazia Chiuri focused on the beauty and splendour of handwork and embroidery, using the show space in the garden of the Musée Rodin to feature tapestries created by artists Madhvi and Manu Parekh, hand-made by Chanakya, the school of crafts in India.

Chiuri works often with Chanakya, an establishment which educates women in generational crafts such as embroidery.

While it might be high fashion, it seems a gentler, more human touch may elicit a much more positive response.