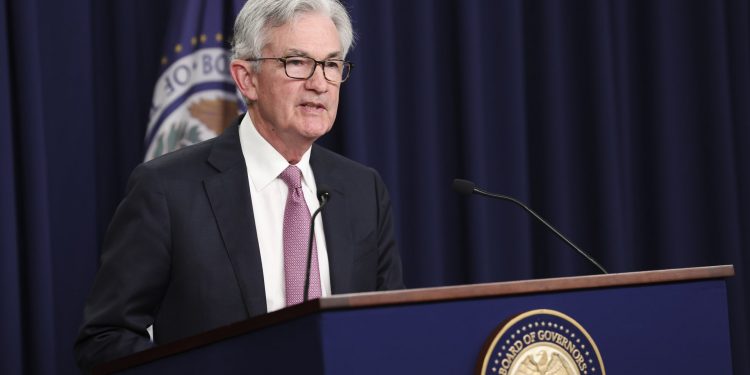 WASHINGTON — The Federal Reserve on Wednesday raised its benchmark interest rate by half a percentage point, the most aggressive step yet in its fight against a 40-year high in inflation.

“Inflation is much too high and we understand the hardship it is causing. We’re moving expeditiously to bring it back down,” Fed Chairman Jerome Powell said during a news conference which he started by saying he wanted to “directly address the American people.” He later noted the burden of inflation on lower-income people, saying, “we’re strongly committed to restoring price stability.”

That likely will mean, according to the chairman’s comments, multiple 50 basis point rate hikes ahead though likely nothing more aggressive than that.

The federal funds rate sets how much banks charge each other for short-term lending, but also is tied to a variety of adjustable-rate consumer debt.

Along with the move higher in rates, the central bank indicated it will begin reducing asset holdings on its $9 trillion balance sheet. The Fed had been buying bonds to keep interest rates low and money flowing through the economy, but the surge in prices has necessitated a dramatic rethink in monetary policy.

Markets were prepared for both moves but nonetheless have been volatile throughout the year. Investors have relied on the Fed as an active partner in making sure markets function well, but the inflation surge has necessitated tightening.

Wednesday’s rate hike will push the federal funds rate to a range of 0.75%-1%, and current market pricing has the rate rising to 2.75%-3% by year’s end, according to CME Group data.

Markets now expect the central bank to continue raising rates aggressively in the coming months. Powell, said only that moves of 50 basis points “should be on the table at the next couple of meetings” but he seemed to discount the likelihood of the Fed getting more hawkish.

“Seventy-five basis points is not something the committee is actively considering,” Powell said, despite market pricing that had leaned heavily towards the Fed hiking by three-quarters of a percentage point in June.

“The American economy is very strong and well-positioned to handle tighter monetary policy,” he said, adding that he foresees a “soft or softish” landing for the economy despite the tightening.

The plan outlined Wednesday will see the balance sheet reduction happen in phases as the Fed will allow a capped level of proceeds from maturing bonds to roll off each month while reinvesting the rest. Starting June 1, the plan will see $30 billion of Treasurys and $17.5 billion on mortgage-backed securities roll off. After three months, the cap for Treasurys will increase to $60 billion and $35 billion for mortgages.

Those numbers were mostly in line with discussions at the last Fed meeting as described in minutes from the session, though there were some expectations that the increase in the caps would be more gradual.

Finally, the statement addressed the Covid outbreak in China and the government’s attempts to address the situation.

“In addition, COVID-related lockdowns in China are likely to exacerbate supply chain disruptions. The Committee is highly attentive to inflation risks,” the statement said.

“No surprises on our end,” said Collin Martin, fixed income strategist at Charles Schwab. “We’re a little bit less aggressive on our expectations than the markets are. Do think another 50 basis point increase in June seems likely. … We think inflation is close to peaking. If that shows some signs of peaking and declines later in the year, that gives the Fed a little leeway to slow down on such an aggressive pace.”

The 50-basis-point increase is the biggest hike the rate-setting FOMC has instituted since May 2000. Back then, the Fed was fighting the excesses of the early dotcom era and the internet bubble. This time around, the circumstances are quite a bit different.

As the pandemic crisis hit in early 2020, the Fed slashed its benchmark funds rate to a range of 0%-0.25% and instituted an aggressive program of bond buying that more than doubled its balance sheet to some $9 trillion. At the same time, Congress approved a series of bills that injected more than $5 trillion of fiscal spending into the economy.

Those policy moves came at a time when supply chains clogged and demand surged. Inflation over a 12-month period rose 8.5% in March, as gauged by the Bureau of Labor Statistics’ consumer price index

Fed officials for months dismissed the inflation surge as “transitory” then had to rethink that position as the pressures did not relent.

For the first time in more than three years, the FOMC in March approved a 25-basis-point increase, indicating then that the funds rate could rise to just 1.9% this year. Since then, though, multiple statements from central bankers pointed to a rate well north of that. Wednesday’s move marked the first time the Fed has boosted rates at consecutive meetings since June 2006.

Stocks have tumbled through the year, with the Dow Jones Industrial Average off nearly 9% and bond prices falling sharply as well. The benchmark 10-year Treasury yield, which moves opposite price, was around 3% Wednesday, a level it hasn’t seen since late 2018.

When the Fed was last this aggressive with rate hikes, it took the funds rate to 6.5% but was forced to retreat just seven months later. With the combination of a recession already underway plus the Sept. 11, 2001 terrorist attacks, the Fed rapidly cut, eventually slashing the funds rate all the way down to 1% by mid-2003.

Some economists worry the Fed could face the same predicament this time — failing to act on inflation when it was surging then tightening in the face of slowing growth. GDP fell 1.4% in the first quarter, though it was held back by factors such as rising Covid cases and a slowing inventory build that are expected to ease through the year.