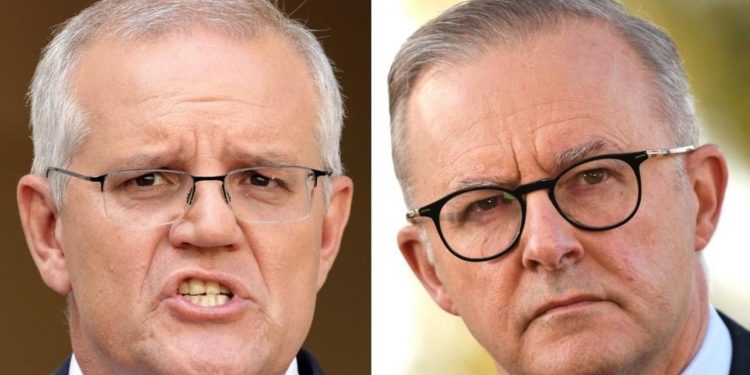 Scott Morrison and Anthony Albanese will face off for the first time this election in a live People’s Forum in Brisbane next week where they will take questions from 100 undecided voters.

Scott Morrison and Anthony Albanese will go head-to-head for the first time this election in a People’s Forum held by Sky News and The Courier-Mail next week.

The Prime Minister and Labor leader will take live questions in Brisbane on Wednesday from 100 undecided voters chosen by Q&A Market Research.

The highly-anticipated debate will be moderated by Sky News’ Chief News Anchor Kieran Gilbert who said The Sky News/The Courier-Mail People’s Forum was the best format for leaders’ debates because the views of undecided voters would be put directly to the nation’s leaders.

“It’s unscripted, unpredictable and an important opportunity for our leaders to be held to account by those who count, the voters,” Gilbert said.

The Courier-Mail Editor Chris Jones said People’s Forums were always unmissable because they provided the most memorable moments of any campaign.

“These are events where the stage-managed appearances and spin are not allowed in the room – and instead real people get to ask the leaders real questions, just as democracy should be,” he said.

“The leaders never know what to expect, and so it’s the closest thing to an authentic experience you’ll get during this campaign.”

Sky News Chief Executive Officer Paul Whittaker said this would be the most important leaders’ debate of the campaign.

“This is a rare opportunity for 100 undecided voters to test both leaders on their policies and vision for the country,” he said.

Exclusive coverage will begin on Sky News from 2.00pm AEST on Wednesday, with the debate to begin at 7pm.

Paul Murray will follow at 8:30pm Live from the venue for post-forum analysis.

Results from the forum will also be announced that night.

Got a story tip? Email us at federalelection@news.com.au

Know some goss or seen something in your electorate? Contact us at election.confidential@news.com.au