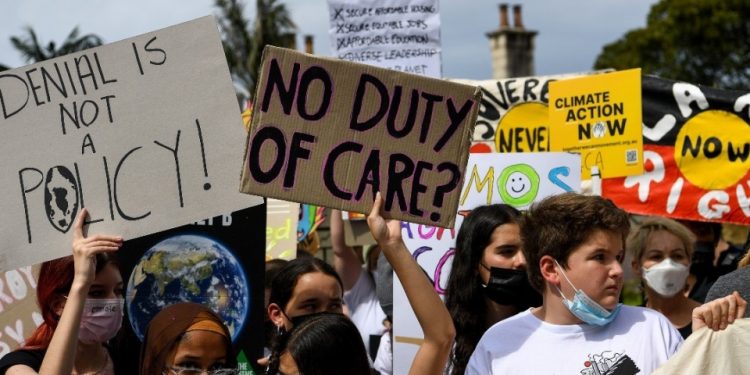 
The Coalition has “overwhelmingly” failed on climate action over its three terms in government, a new report by the Climate Council has found.

The report labels the federal government’s overall performance in relation to addressing and mitigating climate change as a “catastrophic failure”.

A survey of 1299 Australians commissioned by the Climate Council show the majority agree with the assessment, with participants giving the Morrison government an average rating of 3 out of 10 for climate action and one in four rating it zero for ‘not doing anything at all’.

Climate experts say the government has let the country down through years of defunding climate science, refusing to work to meet internationally agreed-upon emissions goals, and supporting the fossil fuel industry over renewable energy.

“Australia has become an embarrassment on the world stage with no credible climate policies and a vague plan that contains flawed modelling, which doesn’t even get us to net zero by 2050,” she said.

The report comes as the Morrison government was criticised for handing down a budget on Tuesday evening that dedicated just 0.3 per cent of government spending to emissions reduction.

The budget cut funding for the Australian Renewable Energy Agency by 15.4 per cent over three years and contained no support for the transition to electric vehicles.

Climate Council chief climate councillor Professor Tim Flannery said when the Liberal-National government first came into power under Tony Abbott in 2013, one of its first acts was to abolish the Climate Commission.

He said this act sent a “pretty clear message” that the government, heavily influenced by fossil-fuel lobbyists and climate-change sceptics, didn’t care about climate science and expert advice.

The government set about attempting to abolish organisations such as the Australian Renewable Energy Agency, the Clean Energy Finance Corporation, and the Climate Change Authority.

Several climate policies and programs were also closed or cut back, such as the Energy Efficiency Opportunities program, which closed in June 2014.

The program, established under the Howard government in 2006, had saved participants more than $800 million in energy costs and effectively reduced emissions.

“What that means is we’ve been left … flying blind,” Professor Flannery said.

“Our science authorities that would have been helping us through all of this have been defunded or are no longer effective.”

Although the report found state and territory governments are trying to pick up the slack and hit emission reduction targets, the federal government’s lax approach to international environmental commitments is the subject of international disdain.

Australia’s current 2030 target under the Paris Agreement is to reduce emissions by 26 to 28 per cent below 2005 levels; other countries, including the US and UK, have committed to halving their emissions.

Even with this smaller target, it was reported before the COP26 summit that Australia would only meet their goal if it claimed “carry-over” credits from over-achieving on previous emissions reduction targets under the Paris Agreement’s predecessor, the Kyoto Protocol.

Professor Flannery attended the summit, and said the government’s “unabashed” promotion of fossil fuel companies while other countries were seriously committing to reduced reliance on fossil fuels made it “embarrassing” to be there as an Australian.

Australia’s national pavilion at the summit included exhibits from fossil fuel companies such as oil and gas company Santos.

COP26 ended with all parties – including Australia – signing an agreement to revisit and strengthen their current emissions targets to 2030.

But in the week after the summit, the federal government refused to confirm it would increase its 2030 emissions reduction target.

“The world laid out very clearly the need for urgent action, and Australia was the standout nation at that meeting that simply was refusing to do its share,” he said.

“And that was appalling for everyone involved.”

What needs to be done

Even if the upcoming election leads to a change in government, Professor Flannery holds little hope that decisive action will be taken.

But more of the same will set Australia even further back on climate action, as Mr Flannery said if more had been done over the past eight years the country could have been on a trajectory towards “climate healing” right now.

Instead, the country has suffered continuous environmental hardships, the latest being devastating floods in New South Wales and Queensland, and the Great Barrier Reef’s fourth mass-bleaching event since 2016.

The Climate Council’s report also shows the conditions that drove the 2019-20 bushfire disaster will likely be considered “average” by 2040.

Professor Flannery said to meet 2030 emissions targets, Australia needs to put in the work now with concrete actions such as moving to electric vehicles and clean energy.

But Mr Flannery said Australia could make up for the loss of income from fossil fuels by exporting electricity produced by green hydrogen, wind, and solar.

And this needs to happen as soon as possible to prevent future pain.

“For people who’ve been involved with the climate issue for a long time, there’s a certain amount of psychological stress that comes with the fact that for eight years, we’ve seen this slow-moving train wreck happen,” he said.

“It’s like watching a family member who’s got cancer who refuses to have treatment.”