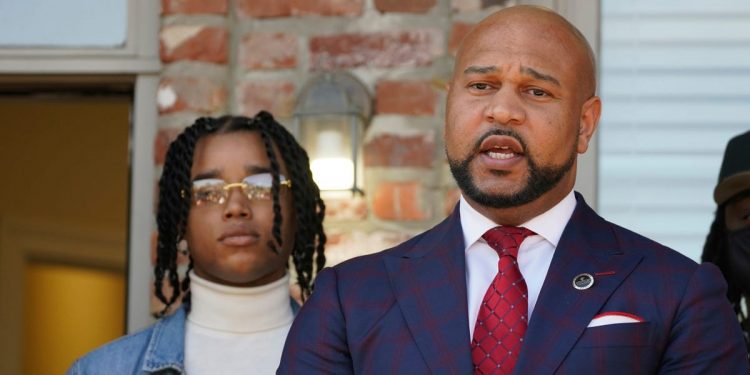 
FedEx put a Black driver was put on unpaid leave because he was too anxious to continue delivering packages on his route after two white men chased him through their neighborhood and shot at him while he was making a delivery, his attorney said.

Brandon Case has been charged with aggravated assault and his father Gregory Case has been charged with conspiracy to commit aggravated assault in connection with the shooting in Brookhaven, Mississippi, according to the Brookhaven Police Department. Attorney’s for D’Monterrio Gibson, a Black FedEx driver, said that last month, the two men chased Gibson and shot at him while he was delivering FedEx packages at a news conference on Thursday.

Gibson told reporters that he believed the shooting was racially motivated.

“After they actually fired the initial shots they proceeded to chase me to the highway,” Gibson said. “So like you failed to kill me the first time you still chasing me. It was some dark stuff.”

Carlos Moore, one of Gibson’s attorneys, told reporters that FedEx put Gibson on unpaid leave after the shooting, which occurred on January 24. Another attorney for Gibson, Rodney Diggs, also said a FedEx manager told him to “complete his route” after he reported the shooting.

“He’s at home without pay, on unpaid leave, because he could handle the stress of going on that same route,” Moore told reporters on Thursday, “FedEx should be ashamed. They have to do better.”

Moore announced on Friday that FedEx had “finally checked on” Gibson and restored his pay retroactive to January 31 in a tweet.

Moore told Insider that he thinks FedEx’s decision to reinstate Gibson’s pay was a reaction to Thursday’s press conference.

“This happened on January 24th and now all of a sudden after the press conference they want to contact him and check in on his wellbeing,” Moore told Insider.

When asked if Gibson was planning to take legal action against FedEx, Moore said that “all the cards on the table” at this time.

“We will see exactly what laws, if any, were violated and anybody that broke a law, civilly or criminally, we want them fully prosecuted or held accountable to the fullest extent of the law,” Moore told Insider.

FedEx did not immediately return Insider’s request for comment about why the company put Gibson on unpaid leave, but a FedEx representative did previously tell Insider that the company “takes situations of this nature very seriously” and will “remain focused on Gibson’s wellbeing.”

Gibson told reporters that he has experienced previous racist incidents on his delivery route that he reported to his managers at FedEx. According to Gibson, he once had a “confrontation with an older white gentleman” while delivering a package where the man “cussed him out.”

When he reported the altercation to FedEx, a manager told him to not deliver packages to the house anymore, he said.

“They really don’t be too concerned about our safety,” Gibson said.

What does base rate rise mean for savers and savings deals?