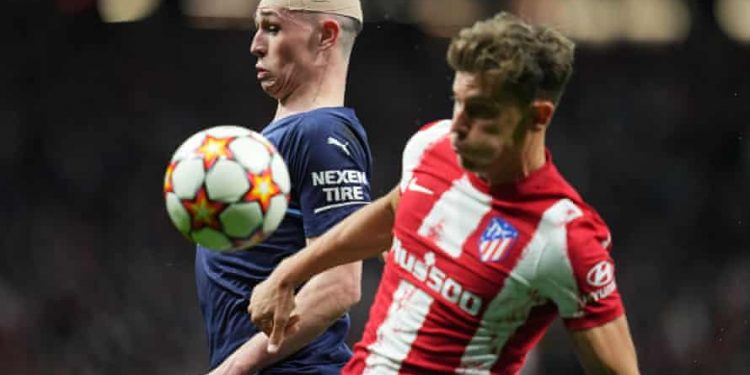 
It was fraught, it was suffocating, it was full-blooded – entirely as billed – and it blew up in the 89th minute with a mass melee between the players of both Atlético Madrid and Manchester City, including plenty of substitutes.

The spark had come when the Atlético defender Felipe, already on a booking for having cleaned out Phil Foden in the early going, slid into him by the sideline before seeming to kick him. With Foden down, all hell broke loose, another Atlético defender, Stefan Savic, trying to lift him to his feet and being shooed away by Oleksandr Zinchenko, who was an unused City substitute, as everybody converged.

There would be much more. When the warring parties were eventually prised apart, Felipe received a second yellow card and Savic a first one, presumably for the altercation with Foden rather than his head-butt on Raheem Sterling, another City substitute, which appeared to have been missed.

Stoppage-time stretched into 13 minutes – there would be seven bookings during that period alone – and there was so nearly an Atlético equaliser, the substitute, Angel Correa, extending Ederson with a low drive at the very last.

The stadium was in a frenzy, minds being lost and, after the full-time whistle, there would be a fight in the tunnel between Savic, the former City player, and Jack Grealish, another unused City substitute, which led to a posse of police officers charging in after them. Grealish had called Savic the C-word during the melee, which led to Savic grabbing his hair.

And yet, when the tempers had cooled and some kind of sanity returned, City had what they wanted – a place in the Champions League semi-finals, where they will face Real Madrid, the conquerors of Chelsea across town on Tuesday night in what was a different kind of high-octane classic.

From a City point of view, this was all about their resilience, showing cojones – as the locals would put it– and there was a particular joy to be had in how they stuck together during a pressure-cooker of a second half to emerge with a hard won clean sheet.

It was difficult to remember Pep Guardiola’s swashbucklers being pinned inside their own half for so long but that was precisely what happened for pretty much the entirety of the second-half, Ilkay Gündogan 97th minute shot that was superbly saved by Jan Oblak not withstanding.

City had imposed themselves in the first-half but it was a different story after the interval, Atlético – urged on by a shrill and partisan crowd – choking them, forcing them back, asking uncomfortable questions. From the restart, they pushed high, bringing the aggression and they had numerous flickers in front of goal, which the home fans were ultra quick to get behind. Renan Lodi’s cross was just too far in front of the dangerous Joao Felix, the striker headed over from a Marcos Llorente centre and Antoine Griezmann was narrowly off‑target from the edge of the area.

City struggled to get up the pitch. Atlético’s gameplan had worked, they had their opponents exactly where they wanted them – on the back foot, pulses racing. The heart-in-mouth moments for the travelling City support continued to come. The Atlético substitute, Rodrigo De Paul, curled wide, Correa howled for a penalty against a combination of João Cancelo and Rodri and, on 87 minutes, another replacement, Matheus Cunha, had a shot blocked by John Stones.

Diego Simeone introduced Luis Suarez from the bench and it seemed written that he would find the equaliser. And yet it was Correa who came the closest at the death, Ederson saving and City exhaling.

It was an epic contest in its own way, partly for the wrong reasons, with the dark arts ever present. And let us not pretend that City did not employ them. With Fernandinho on in the 79th minute to oversee things, City players went down and stayed down, sometimes writhing about.

Foden was a symbol of their defiance. Felipe had left him dazed and bloodied after jumping into him in a 12th minute aerial challenge, wiping him out with a ferocious upper body barge. But Foden, who emerged with a bandage wrapped around his head, refused to be intimidated. Remarkably, Felipe avoided a booking for that but he soon got his first one for going into the back of Kevin De Bruyne. The City midfielder would eventually limp off.

Guardiola wanted his players to seek the ball, to enjoy it, and they got onto the front foot as the first-half wore on, the initial Atlético surge having ebbed. City had gone close from an early corner, Stones heading high, and they created the big chance of the opening period in the 30th minute.

Riyad Mahrez released Kyle Walker, who crossed low and, when Foden laid the ball off, Gündogan had the close-range shooting opportunity. He hit the post and his header on the rebound was blocked by Felipe.

Atlético had not managed a shot in the first-leg and they only got one away in the first-half here – a deflected effort from Geoffrey Kondogbia, which was routine for Ederson. The second period was anything but.