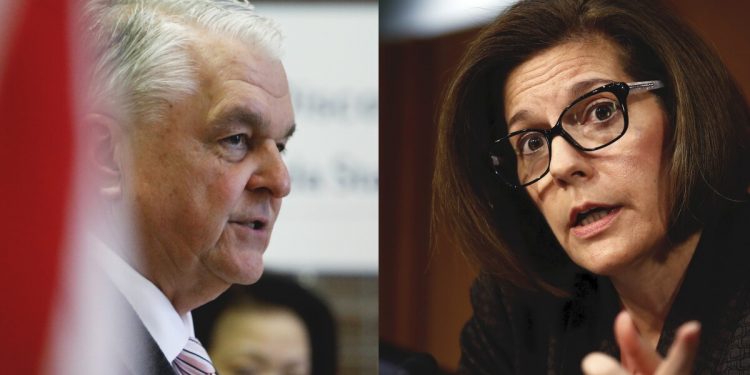 When Nevada Democrats gathered to divvy their delegates to the 2016 national convention, they could have sold tickets, as if it were one of those prizefights that light up the Las Vegas Strip.

There was screaming and shoving as backers of Hillary Clinton were pitted against supporters of Bernie Sanders. Obscenities flew — along with a chair or two, by some accounts — before security and law enforcement officers stepped in and shut the proceedings down.

Today, after years of antagonism, the insurgent forces that battled the establishment ranks at the Paris hotel-casino have prevailed and now run Nevada’s Democratic Party.

Alarmed by the takeover, elected leaders and top political operatives established a rival organization, diverting money and resources to a campaign run through the Washoe County Democratic office here in Reno. That leaves the state party a shadow of its old self.

Among those supporting the unusual arrangement are Gov. Steve Sisolak and Nevada’s senior U.S. senator, Catherine Cortez Masto, who are seeking reelection in two of the country’s most competitive races. If Democrats have any hope of maintaining their gossamer-thin Senate majority, they almost certainly need Cortez Masto to prevail in November.

The same goes for three Nevada Democrats in the House whose seats Republicans have their eyes on; the GOP needs to gain just five seats nationwide to take control of the chamber and usher Speaker Nancy Pelosi into retirement.

The infighting isn’t making it any easier for Democrats.

“It’s obviously not helpful,” said Jon Ralston, the state’s top political analyst and chief executive of the Nevada Independent. “Republicans were going to call the Democrats ‘socialists’ anyhow. Now there is actual reality to it, because the party is run by socialists.” (Or at least candidates backed by the Democratic Socialists of America.)

While there has been a great deal of focus on divisions within the GOP between regular-order Republicans and the seditionist wing led by former President Trump, the upheaval in Nevada underscores the fault lines running through the Democratic Party between the activist left and more centrist officeholders, including the one in the White House.

In California, that division has most recently manifested in the fight over single-payer healthcare, which died in the state Assembly without even coming to a floor vote. In Washington, the senatorial tag team of Arizona’s Kyrsten Sinema and West Virginia’s Joe Manchin III have thwarted progressives’ fondest hopes and their wish list, which includes dramatic steps to fight climate change, and measures to expand child care and voting rights and raise taxes on corporations and the wealthy.

In Nevada, there are similar divisions over issues such as healthcare and foreign policy. But the deeper divide among Democrats is over political know-how.

Before his death in December at age 82, former Democratic Sen. Harry Reid engineered one of the great partisan makeovers of recent years, turning Nevada from a reliably red state into one his party captured in four straight presidential campaigns.

Both of its U.S. senators are Democrats, as are three of four House members, five of six statewide elected officials and both houses of the Legislature.

Why then, Reid disciples ask, fix something that’s not broken?

“We have never tried to deny the success of the past,” responded Judith Whitmer, who became state party chair last March. “In fact, we would like to work with those very same people. We weren’t the ones that took our ball and went home…. We would love for the previous people that were involved to still be involved.”

Whitmer said she and her progressive team were never given a chance to prove themselves, which is true. In the run-up to their election, Ralston reported, $450,000 was transferred from the state party to the Democratic Senatorial Campaign Committee in Washington. After she won, the party staff resigned en masse.

Critics say there was plenty of cause for concern even before Whitmer assumed control, citing, among other things, her support in 2019 for a left-wing challenge to Democratic Rep. Steven Horsford of Las Vegas. He won reelection in 2020 with an underwhelming 51% of the vote and remains a GOP target in November.

Whitmer said the party is “not in the business of looking for primary challengers. All we’ve said is it’s going to be a level playing field going forward. All Democratic candidates are entitled to support and resources from the state party, and we are not making any endorsements.”

The days of the all-powerful party boss, whose command could make or break a candidate, are long past. Today, state political parties serve two essential functions: as a branding mechanism for candidates and a pass-through for campaign cash.

Money shouldn’t be a problem for Cortez Masto and Nevada’s other embattled Democratic incumbents, since it will be raised and funneled through the operation built by exiled operatives and evidently sanctioned by the national party and the Biden White House.

However, the image of candidates in thrall to the Sanders-Alexandria Ocasio-Cortez wing of the Democratic Party — whether true or not — could be more politically problematic.

While Nevada has turned a bluish shade of purple, no one is going to mistake it anytime soon for Denmark or Sweden.