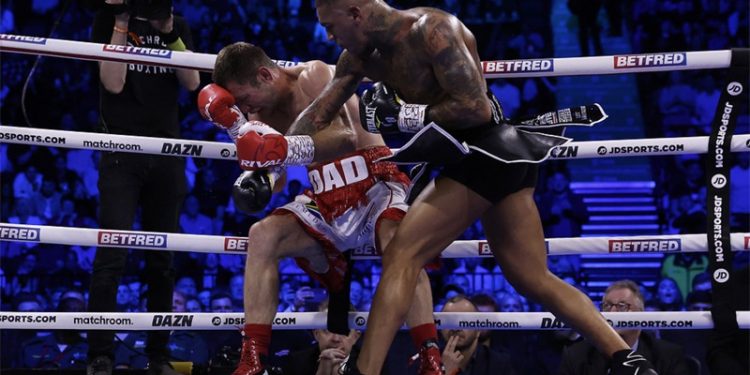 
The day may come soon when boxing media and fans discuss welterweight Conor Benn of England without mentioning his father. Benn (21-0, 14 KOs) took one step closer to that day by taking it to Chris Van Heerden of Los Angeles via South Africa (28-3-1, 12 KOs) in the main event of a Matchroom Boxing card in Manchester, England on Saturday. The end came quickly, courtesy of a hard right hook at 59 seconds of the second round.

Benn’s impressive performance came against an opponent below the top tier of talent. Nevertheless, Benn did precisely what he needed to do against Van Heerden. Benn stayed patient in the first round as Van Heerden moved smartly around the ring, landing several respectable punches. The second round was all Benn. Once he confirmed he had little to fear from Van Heerden, he took care of business. The only plus for Van Heerden is that he avoided his tendency to suffer cuts. “When I fought a southpaw, I thought it would be a problem. But I can beat anyone, and I stand by that. Southpaw, orthodox, boxer, puncher, I knock them all out,” said Benn.

Speculation ran rampant when Amir Khan jumped into the ring to congratulate Benn. But both Khan and Matchroom Boxing promoter Eddie Hearn demurred to confirm anything. “I came here today just to enjoy the champ, just like everyone else. I’m a boxing fan,” said Khan. “He’s got a brilliant career. I’m here to support him. At the moment I’m spending time with the family. I might announce something in the next couple of months.” Khan assured the fans in Manchester he would be coming back, then turned and asked them, “Do people want to see the fight? It’s tough. He’s a great champ. Let’s see what happens.”

“The most imp thing for Conor Benn is a big, big step up,” said Hearn. “The progression of Conor Been is amazing. He’s a true star of British boxing, and this is an elite world welterweight fighter. He’ll go on to be a world champion. Now it’s time to step it up. Mikey Garcia, Danny Garcia, Keith Thurman, Adrien Broner, David Hovannnsyan. He’s a superstar, ad he’s really, really good. Time for a serious test this summer.” Hearn also added the possibility of a fight with Kell Brook, who recently defeated Khan. Benn fights with a massive chip on his shoulder due to the inevitable comparisons and criticism all sons of famous world champion fighters get. Ask Chavez Jr., Eubank Jr., Tsyzu, Hatton, Spinks. He admits it enrages him. Credit to Benn for letting it fuel him. Along with Tszyu, he’s shown serious potential for meeting and perhaps exceeding the previous generation. His name joins the rising young stars of the division, including Jaron “Boots Ennis and Vergil Ortiz Jr., assuming Ortiz can still make weight.

Who should he face next? Perhaps the challenge would wake up Mikey Garcia from his loss to Sandor Martin. But I’d personally rather see him take on Keith Thurman or smash the living daylights out of Adrien Broner, though Broner is far from a serious challenge.

Chris Billam-Smith Doubles Down with Second Win Over Tommy McCarthy In a rematch for a European cruiserweight title, Chris Billam-Smith of Bournemouth (14-1, 10 KOs) won more decisively than he did the first time against Tommy McCarthy of Belfast (18-3, 9 KOs), scoring an eighth-round knockout. The pair were more than willing to engage, if not at the highest level of skills. Billam-Smith began gaining ground by the middle rounds. Several times he landed a heavy-handed power punch right at the bell to end the round, leaving his chance to finish off McCarthy. He landed an impressive right hook in the eighth round, and he didn’t need any additional time beyond the referee counting McCarthy out. Billam-Smith is a legitimate top 15 cruiserweight, and it’s time to test himself against stiffer competition. Alycia Baumgardner returned to England to put on another show for fans against Edith Matthysse. Photo: Mark Robinson, Matchroom Boxing

While WBC and IBO World Super Featherweight champion Alycia Baumgardner of Detroit (12-1, 7 KOs) bides her time waiting for a unification fight, she wisely took a stay busy fight, returning to England where she won her belts from Terri Harper in November. She thoroughly dominated Edith Soledad Matthysse (17-12-1, 1 KO) for ten rounds, winning a scorecard shutout by 100-90. Matthysse, who failed to make weight, is a battle-tested opponent who’s never been stopped. Credit the 41-year-old for never giving up.

Although she doesn’t possess the strength or power, did anyone besides me see more than a little of Ann Wolfe in Baumgardner? Let’s see the impressive Baumgardner against Mikaela Mayer in a unification fight. Campbell Hatton is learning on the job in front of critical fans. He needs to get some seasoning off-Broadway. Photo: Mark Robinson, Matchroom Boxing

Lightweight Campbell Hatton continued his on-the-job training, winning a six-round unanimous decision by 60-54 on all three cards over Ezequiel Gregores (3-10) of Spain via Argentina. Hatton (7-0, 2 KOs), another son of a beloved British fighter, looked improved against Gregores. Then you sober up and remember Gregores was 3-9 coming into the fight. But the criticism needs to be leveled at the promoter and management, not at a 21-year-old fighter who has close to zero amateur experience being forced to learn his craft on big stages with his famous father Ricky sitting in the audience. Put young Hatton on some small regional cards away from the cameras for the next half dozen fights. There’s plenty of time to work with here.

These gaming accessories on Amazon could be lying to you

These gaming accessories on Amazon could be lying to you