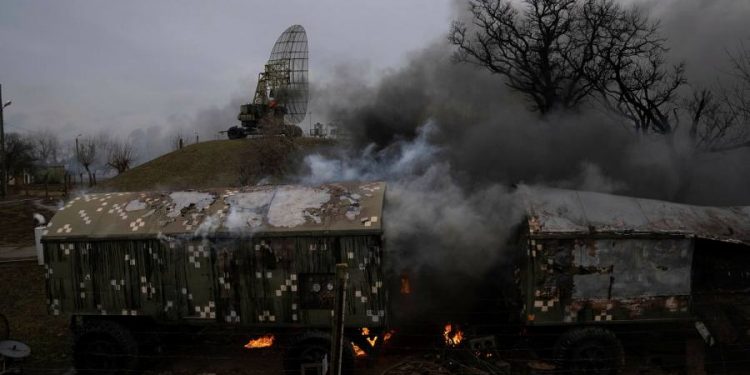 While Ukraine defends itself against a Russian invasion on the ground, a battle to protect the truth is raging online.

The open-source intelligence community is on alert for fake news promoted by Russia, analysing videos that are being used to make Ukraine look the aggressor and persuade the Russian public the cause is just.

The community suffered a setback hours before the full-scale invasion, with Twitter mistakenly suspending the accounts of open-source intelligence reporters. Twitter said a dozen had been flagged as containing manipulated or misleading media, but added it was “expeditiously reviewing these actions” and had reinstated many of the affected accounts.

Bellingcat, the collective of open source and social media researchers, investigators and citizen journalists, is acting as a clearing house for videos and disinformation found by the community, putting its own stamp of approval on accurate sourcing and compiling a database of dubious footage from the front lines.

Eliot Higgins, executive director of the Netherlands-based organisation, said on Thursday that the community was much better prepared compared to the annexation of Crimea in 2014, while Russian misinformation attempts remained unsophisticated.

Just looking at the metadata in files can show how footage has been doctored, wrong dates have been claimed and locations altered, he told a US Foreign Press Association webinar. The metadata means fake videos come with “a blueprint for how they had made the fake”.

Simple observation can also expose fake news. For example, this video blogger has been fooled that a Ukrainian IED attack has killed three civilians in a car. Researchers noted the scene had been staged, with bullet holes visible rather than ones caused by shrapnel, and the corpses showing signs of being previously autopsied, meaning they had probably been supplied by a local mortuary.

Higgins said increased access to satellite imagery, combined with geolocation data, meant it was taking less time to debunk fake footage, the truth being discovered in as little as an hour now.

Another organisation trying to expose what’s real is Dozhd. Check out Danny Leigh’s review of F@ck This Joba documentary on the independent Russian TV channel that has consistently given a voice to Ukrainians.

1. Alibaba sales growth slows
Alibaba has reported its slowest quarterly sales growth since its 2014 public listing, as the Chinese ecommerce giant was hit by rising competition and Beijing’s regulatory crackdown on tech groups. Revenues grew only 10 per cent to Rmb243bn ($38bn) in the fourth quarter. It had never previously reported year-on-year quarterly revenue growth below 20 per cent.

2. Netflix struggles in India
Instead of its target of 100mn subscribers in India, Netflix is estimated to have only around 5mn and trails Amazon and Disney. Our analysis says the streaming service has been slow to address various India-specific issues, from pricing and distribution, to the importance of commissioning more shows in regional languages such as Tamil.

3. DAZN reports big Covid losses
DAZN, the sports streaming group backed by billionaire investor Leonard Blavatnik, racked up pre-tax losses of $1.3bn in the first year of the pandemic as coronavirus disrupted the sporting calendar. The group said it had suffered as customers ditched subscriptions when sports suspended play as the pandemic took hold.

4. EU telco chiefs call for consolidation
Two of Europe’s biggest telecoms groups, Deutsche Telekom and Spain’s Telefónica, posted stronger than anticipated revenues and profits driven by growth in their international businesses, as their chief executives called for more consolidation in Europe. José María Alvarez-Pallete López, Telefónica’s chief, said the number of telecoms companies in the region needed to be reduced because providers were struggling to cover the cost of heavy infrastructure investments.

5. EU-US data wrangle tests digital sovereignty
The Data Act unveiled by the European Commission this week still has a long way to go to become law, writes Richard Waters, but it could make life harder for US tech companies, even if they store and process all the data of their European customers in Europe. More immediately, a drumbeat of interventions by Europe’s national regulators, made under GDPR’s privacy rules, has threatened to slow transatlantic data transfers.

In 2020, Google acquired Neverware, whose CloudReady operating system breathed new life into old computers. It has now integrated it into this new version of Chrome OS. Flex is a free-to-download operating system built for businesses and schools that puts Chrome OS on PCs and Macs. It says it will revive ageing devices with a modern and fast operating system. Ars Technica tried it out successfully on a couple of old laptops.

How a Single Finger Snap Became a Scientific Game-Changer