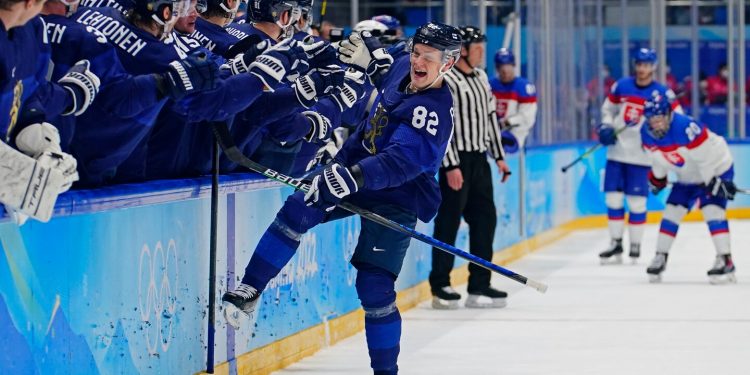 “That was a tough loss for us,” Pesonen said, “and now we have another chance and can go for the gold.”

Pesonen made sure of it: The 33-year-old threw his hands up in the air after he had scored on an empty net in the final seconds in Friday’s semifinal, escorting the puck all the way to the crease after a breakaway. Finland is the only member of the “Big Six” — the unofficial name for the six most successful hockey nations in the world — to have never won an Olympic gold medal. It could come Sunday against either their rival Sweden or the Russian Olympic Committee, who will meet later Friday in the other semifinal, but while the wait continues, the Finns’ victory over the upstart Slovakians also conjured reminders of their tormented Olympic past.

It could be traced back to 1980 in Lake Placid, N.Y., where after the United States had beaten the Soviet Union in the “Miracle on Ice,” the Americans had to rally past the Finns in the third period to win the gold. Finland was a historical footnote in other Olympic tournaments, settling for silver medals in Calgary in 1988 and Turin in 2006, along with four bronze medals between 1994 and 2014. That history wasn’t lost on players after they had held off a late charge by the Slovakians, who were playing in their first semifinal since 2010 in Vancouver.

“You can’t think about those things before a tournament, during a tournament,” defenseman Marko Anttila said, “but now it’s possible.”

It was made possible only after a remarkable comeback win over rival Sweden in the team’s preliminary round finale last week, as Finland erased a three-goal deficit in the third period to win 4-3 in overtime and earn a spot in the quarterfinals. The Finns blasted Switzerland, 5-1 to reach Friday’s semifinal, where they faced a young, speedy Slovakian team that featured 17-year-old Juraj Slafkovsky, who is expected to be a top pick in next summer’s NHL draft.

Slafkovsky entered the game tied for the tournament lead in goals with five, including one in his team’s upset of the United States in the quarterfinals. But the Finns were physical with the 6-foot-4, 218-pound teenager from the onset Friday, delivering hits and checking Slafkovsky whenever he touched the puck. That included late in the first period, when Slafkovsky made a nifty move behind the net to try a wraparound shot — only to be crushed into the boards by defenseman Juuso Hietenan.

Finland’s defensive effort was reinforced by stellar goaltending from Harri Sateri, who finished his shutout with 28 saves. He was gifted a 1-0 lead to protect after Sakari Manninen scored late in the first period, cradling a rebound around the stick of Slovakia goaltender Patrik Rybar and flicking the puck into a wide-open net.

Slafkovsky dazzled in the open ice in the middle of the second period, using his speed to create a two-on-one opportunity and sailing a pass toward the net through the legs of a Finland defender. But his teammate, Marek Hrivik, received the pass late and missed a wide-open net with Sateri out of position.

“It wasn’t the best choice, but I have to learn from that and pass it quicker,” Slafkovsky said. “We had pretty much offensive chances when we held the puck in their end, but when the luck isn’t on your side … then it’s tough.”

After his team was unable to crack Sateri in the final seconds despite putting an extra attacker on the ice, Slafkovsky stopped to talk to reporters about what it would mean for his country to earn its first bronze medal in the consolation game Saturday. But as he spoke, Finland’s players were still celebrating their chance at gold around him. Personen removed his helmet and cracked a huge grin on his way back to the locker room.

“It’s a pretty special day,” Pesonen said. “What a great opportunity to play for the brightest medal.”

As his team’s second-oldest player, Anttila, 36, had watched Finland prosper in big tournaments over the years — including world championships in 1995, 2011 and 2019 — only to never be able to break through for gold at the Olympics.

Anttila almost lost a chance to be a part of the run in Beijing: He tested positive for the coronavirus a few weeks before he arrived for the Games and was forced to isolate in a hotel in Beijing while his team practiced. Finland Coach Jukka Jalonen told reporters before the tournament that Anttila was not receiving adequate food and was under mental stress because of the isolation — and blamed China for violating his Anttila’s “human rights.” He was eventually cleared to rejoin the team after nearly a week, and by Friday, it was hard to process how his fortunes had changed over the past two weeks.

“Of course, it wasn’t an easy time there,” Anttila said. “A lot of time to think, and think all kinds of thoughts. This was actually one of them, playing in an Olympic final. And now it is possible for us.”

NatWest axes 32 branches… and tries to keep it quiet!

NatWest axes 32 branches... and tries to keep it quiet!