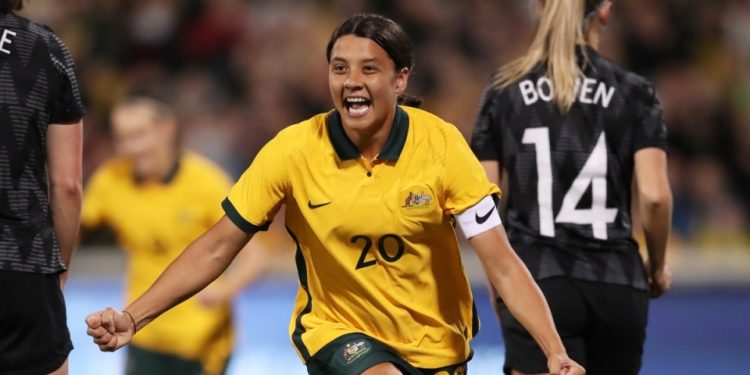 Sam Kerr’s first-half double has driven the Matildas to a strong win against New Zealand in their first match in Canberra since 2013.

The nation’s all-time leading scorer was at her damaging best, bringing up her 58th and 59th international goals as Australia knocked off the Kiwis 3-1.

It meant back-to-back wins for the Matildas in their two-game series having won 2-1 in Townsville on Friday night.

They’d needed 37 shots in the first meeting to score twice but it only took five attempts to reach that mark in the nation’s capital, with captain Kerr and Hayley Raso giving them a 2-0 lead after 17 minutes.

The three-minute flurry saw the legendary Kerr unmarked to head home a corner before Raso curled one home on her left foot from outside the box without giving Kiwi keeper Erin Nayler a chance.

It was a brutal double blow a New Zealand side that should have led on four minutes, but the usually lethal Hannah Wilkinson fired her shot wide after finding an acre of space on the counterattack.

She more than made up for it shortly after, playing a delightful chipped ball that allowed Kerr to beat the offside trap and double up with a sublime outside-foot finish for 3-0.

She shows composure with the finish, using the outside of her right foot to place it in the bottom corner.#AUSvNZL is live NOW on 10 Bold pic.twitter.com/XOM7swgD8Y

But New Zealand found some sort of lifeline on the stroke of halftime, with Wilkinson getting onto a clever pass from Olivia Chance and burrowing her way through defenders for an industrious goal.

That meant a fourth straight match the Matildas had failed to keep a clean sheet.

WILKINSON GETS ONE BACK

New Zealand grab a goal before half-time, could this be a shift in momentum?#AUSvNZL is live NOW on 10 Bold pic.twitter.com/rwRIKFYWXu

Kerr wasted a couple of gilt-edged chances to notch her hat-trick, putting another towering header high after Steph Catley’s gorgeous cross and another header wide from point-blank range from a sharp Charlotte Grant ball on 68 minutes.

Her chances highlighted a more dour second half in which scoring opportunities were much harder to find in front of 13,077 fans at GIO Stadium.

“I do think we played well in that first game, but it didn’t pay off with chances,” he told reporters.

“We spent a lot of time doing reviews and in training talking about the final pass and finishing … the players were 100 per cent focused on that final third, especially in the first half.

“From the fifth minute onwards to that third goal, it was phenomenal football.”

Gustavsson said the two-match series was another positive step on the side’s journey toward the 2023 World Cup, after falling to South Korea in the Asian Cup quarter-final earlier this year.

“We internally have seen the progress and the journey for a while now, even if the results might not have been there,” he said.

“We lost a little bit of faith and belief in what we’re doing in that second half against Korea.

“We came back into this camp and said we need to keep believing what we’re doing even more and stay loyal to that process.

“We need to have a little bit more cohesion and chemistry and continuity in what we’re doing, and the players have been phenomenal, being patient with me as a coach because I’ve thrown a lot of curveballs at them.”