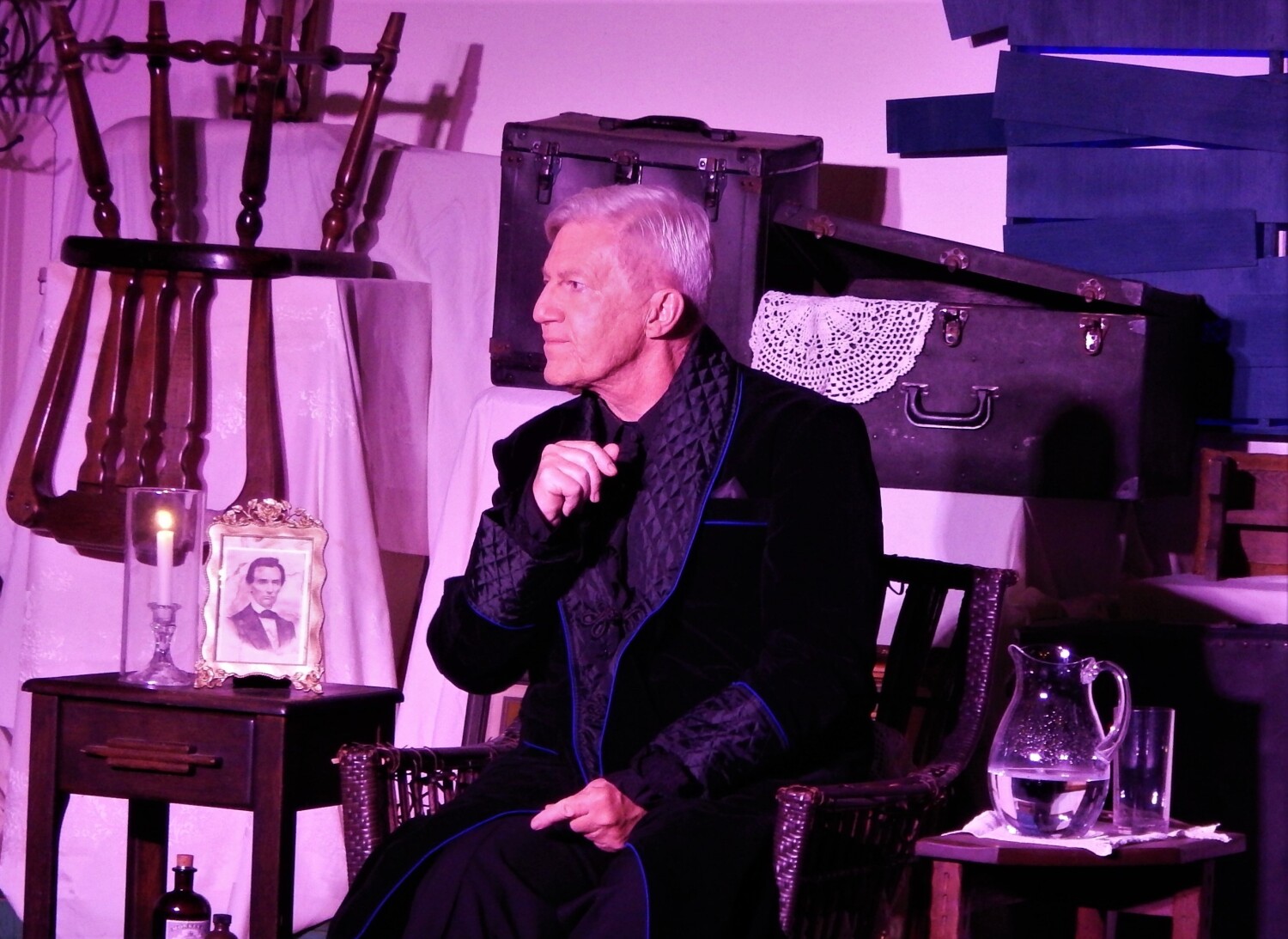 I’d checked the address over and over again, so I knew I was in the right place: Dugan’s Backyard Playhouse. It didn’t look like a theater, but I hadn’t expected it to. I knew Tom Dugan was doing his one-person show “The Ghosts of Mary Lincoln” on a makeshift outdoor stage at his house, on this quiet Woodland Hills cul-de-sac. I had RSVP’d. It would be not be creepy of me to skulk across his lawn and slip through the open back gate at nightfall.

Even so, I felt transgressive. After staying home for more than a year, I had the sense that I was sneaking into a speakeasy or infiltrating a séance.

The speakeasy aura dissolved as soon as I took my seat, a patio chair alongside a turquoise swimming pool, separated from about 15 other audience members — all of us masked. I had a clear view of the candlelighted performance space (by Chris and Becky Petersen) representing the cluttered attic where Abraham Lincoln’s elderly widow spent her final years. I was offered complimentary bottled water and snacks, as well as a blanket to protect me from the night air.

The séance feeling, in contrast, intensified over the next 80 minutes as Dugan channeled Mary Lincoln’s peppery, splenetic, tenderhearted spirit and shared ghostly tales from her uncanny, death-haunted tenure on this planet from 1818 to 1882.

Just before the start, director Shelby Sykes explained that she and Dugan set out to develop this play — which he began writing in 2013 — with an actress in the role. Dugan eventually took over, a casting change that would demand, Sykes explained, suspension of disbelief. Not only because Dugan is a man, but also because he’s tall: Mary was only 5-foot-2 compared with 6-foot-4 Abe.

Sure enough, at first glance Dugan — slim, white-haired and elegant in his modern pajamas and robe — didn’t give off “little old lady in 1882” vibes. Nor did he speak in a high-pitched voice or affect noticeably womanly gestures. Yet somehow, from the moment he began to talk, any disbelief I might have been harboring got up and left, entirely on its own, no suspension required.

I last saw Dugan in 2015 in his one-man show “Wiesenthal” at the Wallis Annenberg Center for the Performing Arts in Beverly Hills. There he made more of an effort to dress and speak like his subject, Simon Wiesenthal, but, just as in this role, he struck me more as a medium than an impersonator. He has a knack for selling the dramatic pretext for an impending monologue — in this case, we’re supposed to be journalists at a press conference Mary has called — and he manages to sustain the illusion by intercutting stage business with often spellbinding anecdotes. Steve Shaw’s sound design imparts subtle atmosphere.

As a character, Mary Lincoln is fascinating but doesn’t come with an especially uplifting or aspirational arc. She endured unimaginable tragedies — her husband’s assassination, the early deaths of three of her four sons — but because she reacted so inappropriately, according to the values of the era (she may have had bipolar disorder), she died an impoverished outcast, estranged from her only remaining son. But she could give as good as she got, or better. And in the play’s strongest moments, Dugan endearingly conveys her enviable toughness and cantankerous wit.

‘The Ghosts of Mary Lincoln’

Tips for beginner players: Which casinos choose to start with?

What Is Social Casino Gambling?

In its various forms, social...

Who Built Harrenhal? As its...

8 breezy bike trails that teach you about L.A. as you ride