Fontaines D.C. on winning Best Band In The World at the BandLab NME Awards 2022: “About time!” 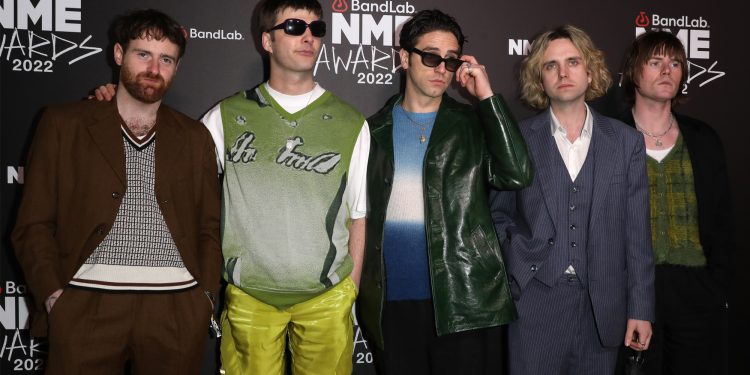 
Fontaines D.C. have reacted to winning Best Band In The World at the BandLab NME Awards 2022: “About time!”

The Irish band beat out Amyl & The Sniffers, Ben&Ben, Bring Me The Horizon, CHVRCHES, Glass Animals, HAIM, Måneskin, Nova Twins and Wolf Alice for the trophy.

In their acceptance speech, they gave props to CHVRCHES and Robert Smith for their performance of The Cure’s ‘Just Like Heaven’ earlier in the night, and poked fun at the government: “We’re gonna party like Number 10 tonight!”

Speaking to NME in the winner’s room at the O2 Academy Brixton on March 2, frontman Grian Chatten had a succinct response to their win: “About time.”

He added: “We’ve never really won an award before, so I don’t know, I’ve never seen people so elated in my whole life.”

Carlos O’Connell quipped: “We had to keep telling ourselves we were the best band in the world from the moment we started. And now that someone else has said it, this might be the beginning of the end.”

To which Chatten said: “This lad has the propensity to talk the most depressing shit every time we’re at an awards show.” Watch their full interview above.

In April, Fontaines D.C. will release their new album ‘Skinty Fia’. So far, they’ve previewed it with the singles ‘Jackie Down The Line’ and ‘I Love You’. They’ve also been announced for the Latitude 2022 line-up.

Check out all the news, interviews, winners and more from the BandLab NME Awards 2022.

Better Mortgage Now Licensed In Every State But Nevada