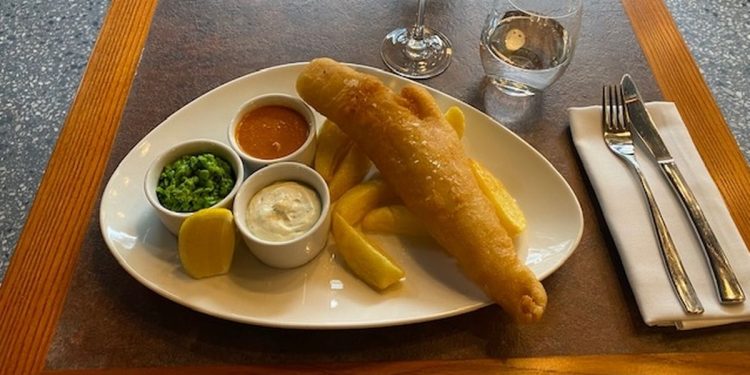 
Celebrity chef Gordon Ramsay has made headlines over the last year due to the high prices on his restaurant meals.

People have dubbed his fry ups a “rip off” and customers were gobsmacked at the cost of a steak (and the size).

So, when Gordon’s new Bread Street Kitchen & Bar opened up in Liverpool journalist Phoebe Barton decided to put the chef’s restaurant to the test.

And, Phoebe, who writes for the Liverpool Echo, was tempted by many of the offerings from the steak and the beef wellington to the butter chicken curry.

But, she decided on the classic fish and chips – a British staple.

The menu item is made up of battered fish, chunky chips, mushy peas, tartare sauce and “chip shop” curry sauce.

However, rather than costing around £6 like it would at some chippies, the dish was priced at £16.50.

Phoebe claims this is “pricier” than at other establishments in the area.

She said: “There’s no denying Bread Street Kitchen & Bar is a pricier dining venue compared to some other restaurants in the city.

“I’m sometimes wary that you can be paying for the name that’s above the door rather than the quality of the food, but this wasn’t the case at Gordon Ramsay’s restaurant.”

She continued: “When my fish and chips arrived, I was delighted by how delicious the dish looked.

“The fish was a good size and the golden-brown batter looked perfect.

“The three little dishes containing the mushy peas, tartare sauce and curry sauce were a feast for the eyes – I couldn’t wait to dive in.

“My knife cracked through the batter revealing the bright white fish, which flaked into chunks as the knife smoothly sliced through it.”

Phoebe says the food tasted as good as it looked.

She said: “The taste was divine and the texture super soft, highlighting how fresh the fish was.

“The mushy peas were soft but not runny like they sometimes can be, and they seemed to have a slight hint of mint which I thoroughly enjoyed.”

The condiments also got the foodie’s approval.

“It had a lovely kick but wasn’t too spicy, and the sauce had a creamy texture which coated the chips well. I’d have to say it was the best curry sauce I’ve ever had.

“The tartare sauce was creamy, smooth, full of flavour and it complimented the fish beautifully.”

However, Phoebe did criticise the chips for not being crispy enough!

She added: “I usually wouldn’t pay £16.50 for fish and chips, however, I have to say it was worth every penny. Every component was cooked beautifully and full of flavour.

“Having eaten fish and chips so many times over the years, it’s rare for me to feel like I’m eating the dish for the very first time, but this is how I felt dining on Bread Street Kitchen & Bar’s fish and chips.”

Phoebe also tied the Monkey Shoulder Cranachan Cheesecake with Raspberry Sorbet for £7 and said it was delicious.

Would you pay this much for fish and chips? Tell us in the comments…

CDC email: Let’s do better with ‘our data’

CDC email: Let’s do better with ‘our data’