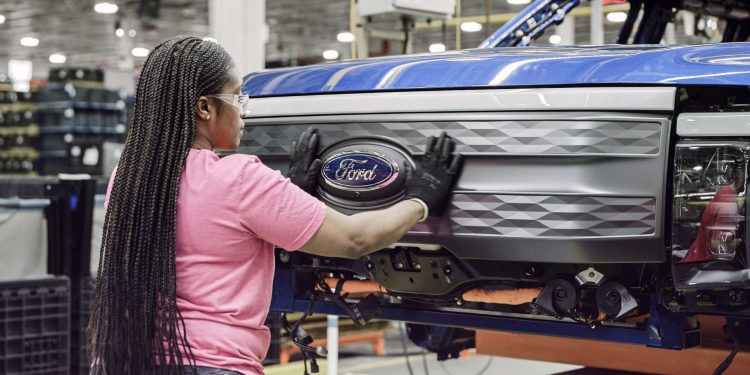 DETROIT – Ford Motor posted first-quarter results Wednesday that were in line with Wall Street’s expectations, though its net profit was dragged down by a stake in electric vehicle maker Rivian Automotive and reduced vehicle production.

Ford reported an unadjusted net loss of $3.1 billion, including a loss of $5.4 billion on the company’s 12% stake in Rivian. That’s compared with a net profit of $3.3 billion during the same period a year ago.

Rivian stock shed about 52% of its market cap during the first quarter, bringing the value of Ford’s stake down from $10.6 billion to $5.1 billion.

Here’s how Ford did compared with what Wall Street expected:

Chief Financial Officer John Lawler described Ford’s first-quarter results as “mixed,” citing supply chain problems and an adjusted pretax profit of $2.3 billion that, even excluding the Rivian hit, came in lower than the $3.9 billion it reported a year ago.

Lawler said strong vehicle pricing and expectations for production to increase throughout the year allowed the company to maintain its guidance. He reconfirmed that the automaker expects wholesale volumes, which are closely correlated with production, to increase by 10% to 15% compared to 2021.

Ford’s wholesale volumes were down 9% during the first quarter from a year earlier to 966,000 units.

For the quarter, Ford earned $1.6 billion from its North American operations, a significant decline from the $2.9 billion it made in that market a year ago. Its European operations reported a $207 million pretax profit compared with $341 million a year earlier. Losses from its operations in China widened from $15 million a year ago to $53 million.

Ford’s stock has been under pressure this year, down about 30% this year. It was the top growth stock among automakers in 2021.

Aside from the earnings and guidance, investors are watching for any updates or progress on CEO Jim Farley’s Ford+ turnaround plan and for any new information on the company’s electric vehicle plans. Ford celebrated the start to production of its electric F-150 Lightning pickup earlier this week.