THE good news for the Easter weekend is that it looks likely to be hot.

The bad news for millions of drivers planning a getaway is that a perfect storm of gridlock and rip-off petrol prices is also forecast.

The cynical bid to cream off £30million a day in profits from one of the busiest weekends for motorists, at a time of national hardship, makes the case for a PumpWatch price watchdog undeniable.

Meanwhile, the attention-seeking eco-loons getting their jollies from blockading oil depots are no better.

These deluded Poundshop Che Guevaras harm the very cause they imagine they are championing. 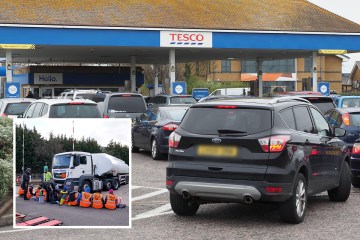 With drivers trapped between fatcats and fools, spending Easter weekend in the garden has never looked so appealing.

Its tone-deaf, money-grubbing letter almost reduced Ukraine to a footnote, focusing on the plight of Russians “for whom our collective hearts break”.

It is of course true that not all Russians support Vladimir Putin’s bloodthirsty rampage. But plenty do.

Can the school guarantee none of its pupils or parents are among them?

As for the letter’s naive handwringing about Russia beginning “the march towards . . . western values”, we don’t think Putin needs any encouragement when it comes to marching westwards.

It’s his tendency to crush those values under his troops’ jackboots when they get there that he seems to struggle with.

CHILD-molesting ex-Tory MP Imran Ahmad Khan is now facing jail for his sex assault on a 15-year-old boy. About time too.

But Khan’s case is also an example of the chilling and ever-increasing suppression of the Press in the UK.

On the same day this amoral chancer tweeted in support of press freedom last year, he was secretly trying to gag The Sun from telling readers his name.

Luckily, on this occasion he failed.

But that’s not always the case.

Such two-faced behaviour by the powerful, rich and famous is sadly not uncommon.

The public don’t know the half of it.

That suits those with things to hide just fine.

WE have every faith in racing reverend Simon Butler to do well at Le Mans.

He’s well-versed in the example of Jesus, who fasted 40 days and 40 nights.

In comparison, going fast for 24 hours should be a cinch.