Forget about Scalebound and Bayonetta 3, Platinum should be working on a Vanquish sequel 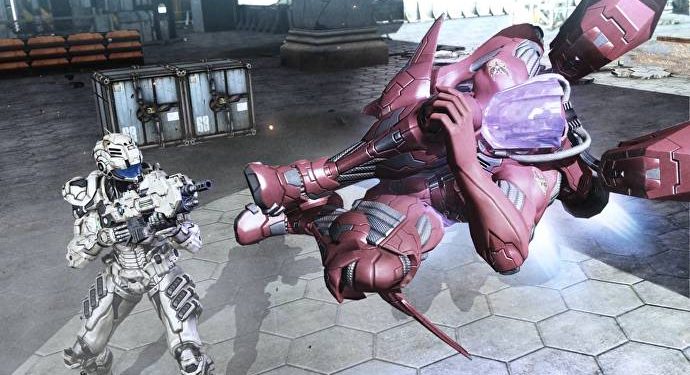 
After rocket-sliding toward an enemy, you kickflip off them to chain multiple mid-air headshots. Then, you toss a grenade at a sniper nest, vaulting over cover to detonate the explosive with a well-timed bullet. An answering rocket barrage sends you sliding along the ground as missiles fly overhead, swapping out to a sniper rifle to pull off a trickshot in transit. All of which takes place in slow-motion, of course.

It’s been almost 12 years, and you’d still be hard-pushed to find a third-person shooter that looks as good in motion as Vanquish. Released a year after Bayonetta, Vanquish has mostly served as an idiosyncratic footnote in the softography of action gaming masters PlatinumGames, albeit briefly sharing the spotlight with Hideki Kamiya’s gun-toting witch as part of a 10th Anniversary Bundle in 2020. And while Kamiya’s series has gone on to spawn a sequel – with Bayonetta 3 scheduled to come out sometime in the next decade-or-so – Vanquish has been mostly forgotten.

And, it must be said, not for entirely unfair reasons. While Platinum titles aren’t exactly known for their narrative weight, Shinji Mikami’s game is particularly woeful in this regard, with paper-thin characters spouting naff one liners (the highlight arguably being, after a tank has destroyed a pile of debris blocking a tunnel, “This colony won’t be walking straight for a while”).

Swears are thrown around like confetti, lacking weight and instead coming across as a misguided attempt at writing ‘mature’ characters, while a forgettable storyline and generic sci-fi artstyle wastes an imaginative setting, with American marines fighting Russian robots inside a gigantic, cylindrical space station. And while the fast-paced, aggressively linear campaign feels like a breath of fresh air nowadays, many found the value proposition of a six-hour runtime, alongside optional combat challenges, hard to swallow back in the 360-era.

And yet, the strengths of Vanquish’s combat system easily rise above these flaws, shining particularly brightly with the huge performance boost afforded by modern consoles. If character action games like Bayonetta work best as tools to express the player’s creativity, Vanquish remains one of the few truly successful attempts to emulate this ethos in a shooter, alongside the likes of Doom Eternal.

Mikami came into Vanquish with the experience of iconic action games like God Hand and Resident Evil 4 under his belt, saying in a 2010 Engadget interview that he specifically aimed to emulate the 70s anime series Casshan, which featured a nimble android protagonist who could defeat huge groups of robots. Mikami also expressed a preference for Western-developed action games at the time, switching from focusing on melee combat to gunplay as a breath of fresh air.

“There’s been many shooter games around, but they tend to be rather slow in pace, so I wanted to speed it up and make it faster, quicker and more exciting,” Mikami said in a translated GameSpot interview. “It’s very risky, because it breaks all the rules of shooter games: it’s just pure speed.”

The lynchpin of this system is the rocket slide. Squeezing the left-bumper sends robotic-suited protagonist Sam Gideon flying across the battlefield, rapidly depleting an energy bar also used to trigger ‘Augmented Reality’ mode, which slows gameplay down to a crawl. In concert, these mechanics completely invert the standard third-person shooter template established by its contemporary peers like Gears of War. A generous health system allows you to push forward aggressively, strategically picking off enemies out in the open and using cover only to grab a quick breather (Platinum directly encourages this approach, tracking the percentage of time you spend in cover every level).

This design approach also allowed Platinum to lean into their character action roots, creating enemies that encourage constant movement with shmup-esque bullet patterns to dodge. Fights involving rank-and-file robots are fairly standard affairs, but larger foes launch targeted attacks telegraphed with visual and audio queues, allowing you to bob and weave around them in a manner more reminiscent of Dante than Marcus Fenix.

These styles do occasionally clash – particularly chaotic fights can make the most heavily-signposted attacks near-impossible to focus on, for example, while era-appropriate turret sections and moving platform sequences feel out of place with the foot-forward nature of combat. However, when Mikami reigns in the bombast, particularly in later levels, these mechanical wrinkles come together in a uniquely thrilling way.

And what third-person shooters games in the intervening decade have forgotten is the sheer style on display here. Sam is smooth and responsive to control, with a granularity and flamboyance to his animations, facilitating player-controlled spectacles which are occasionally on-par with the game’s gun fu cutscenes. Add in a varied collection of enemies requiring different tactical approaches, from hulking mecha-spiders down to tiny orbs surrounded by protective layers of metal, and controlling the flow of a battlefield can take on an oddly balletic air. All it’s missing is a style meter gradually ticking upwards toward a SSS ranking, honestly.

Platinum continues to carry the torch for character action games in an era increasingly dominated by the (admittedly excellent) likes of the Soulsborne franchise, so Bayonetta 3 should be a welcome addition to this pantheon upon its eventual release.

Meanwhile, games like Housemarque’s PS5-exclusive shooter Returnal show that an appetite still exists for fast-paced, arcade-inspired third person shooters. So here’s hoping that the DNA of Mikami’s gem lives on: if we can’t get a sequel, at least we can continue to bask in its flawed glory – surely it’s more deserving than whatever Frankenstein’s monster Platinum would likely resurrect from the ashes of Scalebound.